If you’re a professional athlete, there’s a level of expectation from fans, media, and management to “give back.” After all, you’re playing sports for a living and making large sums of money for it. Life can be a whole heckuva lot harder. Yet, for players on the Boston Bruins — both past and present — giving back has never been an issue. In fact, it’s been as consistent as a Zdeno Chara slapshot, Patrice Bergeron assist, Brad Marchand breakaway, or Tuukka two-pad stacker. You can count on all of the above just like you can count on anyone wearing a B’s sweater to do their part in the community.

It’s setting this example both on and off the ice where the best Bruins players have excelled most recently. And it’s the reason why some of our favorites from yesteryear continue to be talked about and admired today. Here are just some of the ways generous gents wearing the Black N’ Gold have shown the best kind of charity to local New England charities over the years, and why we think the world of them for it (I’m sure I’ll miss mentioning some of the charitable ways the B’s have bettered their community, but that’s a nice problem to have I think)!

This was my first introduction to generosity with a capital ‘G’ for players wearing the spoked capital ‘B.’ As you can see from the vintage shirt pictured above, the slogan B’cause we care, were ‘Bruin’ up a better Boston, fit the team, city, and organization to a ‘T’ (another Boston wink & nod). While no longer in existence, the Bruins Wives’ Charity Carnival raised money for the Cystic Fibrosis Foundation and featured the most popular B’s roster players of the era — along with their spouses — playing hockey games, holding competitions, fielding Q&A’s, signing autographs, and plenty more, all in the heart of “The Garden,” old and new. If I still lived in Western Massachusetts, I’d have driven to my parents’ home and raided the basement to find all my old Charity Carnival programs, pictures, pins and the like. It was an eye-opening experience for any young B’s fan not only because you got to meet your favorite players, but also because you met many kids your age benefiting from the CFF. To see first-hand what “giving back” looks like had a profound effect and I’ll forever be grateful to the B’s for instilling that commitment to community within me.

No. 8 was my favorite player growing up, and as soon as I was a grown-up working in local media and often partnering with area children’s hospitals and clinics, Cam Neely became even more of a favorite of mine. That’s because in 1995 he started the Cam Neely Foundation for Cancer Care in honor of his parents, both of whom passed away due to cancer. Since then, the former B’s All-Star and current team president has worked alongside a dedicated foundation team to “donate over $30 million to Tufts Medical Center to design, fund and complete projects with immediate tangible results that have had a positive impact on thousands of families” dealing with cancer treatment, care and hospitalization, according to its website. We always knew Neely to be quite the prolific goal scorer, but these goals are achievements with life-changing results that have positively impacted countless Boston-area children and their families. Maybe we need a new hockey nickname for the B’s boss: “the Gr8 one!”

This summer, Bruins owner Charlie Jacobs made a big announcement: the Boston Bruins Foundation, which started in 2003 as a way for the team to give back to the organizations that matter most to the fans in Boston, successfully raised more than $3 million to 150 area non-profit charities. Among them, “the Massachusetts Down Syndrome Congress, Operation Hat Trick, local Boys & Girls Clubs, Franciscan Children’s Adaptive Skating Program, and Massachusetts Hockey,” to quote but a few from the celebratory press release. One of the most notable beneficiaries of the Foundation and one that B’s legend Bobby Orr was integral in helping was the Humboldt Broncos junior hockey league team. The Bruins largest 50/50 raffle of the 2017-18 season donated a total of $200,000 to the team’s community relief efforts in the wake of the tragic bus crash that claimed the lives of 16 players and team personnel in April.

Join us and the Boston Bruins Foundation in supporting the Humboldt Broncos community by participating in tonight’s Online 50/50 Raffle, which is currently over $100,000: https://t.co/FfzeJ1595S pic.twitter.com/FBqMQgAaEO

Other noteworthy sponsorships, partnerships, and collaborations from the Boston Bruins Foundation (with photo credits courtesy of all the respective events) feature both current B’s players and respected alumni all working together to improve, enhance, enlighten, and entertain the hard-working people and families who cheer on the Bruins:

Pictured at the top of this article is Patrice Bergeron with kids from the Children’s Hospital, Boston as well as area youth hockey players. They are all Patrice’s Pals, which “brings patients from local hospitals and other children’s organizations to the TD Garden to experience a Bruins home game where these deserving children are able to feel the excitement of a professional hockey game as VIP guests,” as the Bruins official website states.

Ever since No. 37 first took the ice for the B’s back in 2003 (FIFTEEN YEARS AGO…THAT’S INSANE), he’s been an integral, essential part of the team’s success. Bergy is a leader who sets an example through his dedication, hard work, and perseverance, Bergeron does the same when it comes to his community work. You could argue he puts the puck in the net just as frequently as he puts smiles on the faces of countless kids and families across New England. I’d say he does that even more! It’s hard to imagine where the Boston Bruins would be right now, both as a hockey franchise and as a charitable pillar in the region, without Patrice Bergeron. We could all be so fortunate to call him “Pal!”

For the past 3 years, B’s Captain Zdeno Chara, whom everyone loves to call “Big Z,” has truly made a big difference around Greater Boston by leading the charge for the team’s annual “PJ Drive.” Like Bergeron, Big Z is as integral to the team’s success off the ice as he is on it, working as a mentor, leader, volunteer, and spokesman for numerous charitable causes & organizations, none-so more endearing than the PJ Drive, which benefits area youth in need. “Over 100,000 Massachusetts children have received PJ’s through the Bruins PJ Drive over the past ten years,” according to a team press release. The only other “PJ” with this much success in Boston is Mr. Axelsson (who I featured in a blog post about the B’s best scouts earlier this summer — you always “feel the need for Swede” when Per-Johan is around)!

Cuts For A Cause

This upcoming season will be the Bruins’ 11th season participating in the “Cuts For A Cause” program that benefits children’s cancer research at the Tufts Medical Center. As you can see in the video above, and as #BehindTheB has chronicled over the past few seasons, this event is a fan and player favorite. It’s also an incredible bonding experience for the boys in Black N’ Gold and is often referenced throughout the year as the time many players became even closer to one another and the Boston community at large.

Over $105,000 already raised for Cuts for a Cause, and the event hasn’t even started! Well done #Bruins fans. Well done.

Our friends at Bruins Daily on Twitter shared a few years ago just how positive and difference-making this event can be for the city. “Well done,” indeed!

You’d be hard pressed to find any person around the city of Boston who didn’t/doesn’t love what Shawn Thornton brings/brought to the table for the team and the community. Just take a look at the homepage for “The Shawn Thornton 22 Foundation,” and you’ll see exactly what I mean. It’s one thing to be a Stanley Cup champion in town, and it’s something even more impressive to be a champion of the people. And that’s exactly who Thornton was, is and will continue to be in retirement. From his aforementioned Putts & Punches for Parkinson’s golf outing to his road & marathon races to his everyday volunteerism, he and his foundation are all about raising awareness, funding innovative research, and helping to relieve the burden and improve the quality of life for patients and their families, as his website illustrates. But here’s the paragraph that brings a smile to people’s faces: 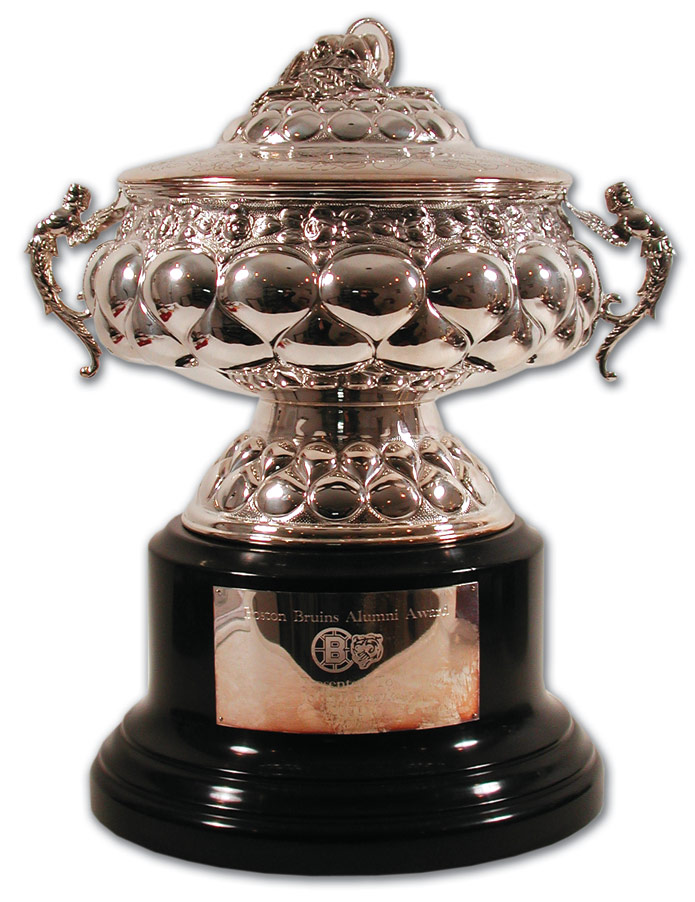 “While in Boston, Shawn took on a very active role in the community, becoming a fan favorite of many local residents. He is no stranger to public or media appearances and is extremely involved in the charitable world. He regularly visited local hospitals, sat on the board for a variety of charity events, and was a spokesperson for Athletes for Heroes, a program that supports the children of fallen or severely injured soldiers. In 2009 Shawn received the John P. Bucyk Award which honors the Bruins player who has contributed the most to charitable and community endeavors.”

“The Chief” himself would be proud of all the recent and current Bruins players who go above and beyond the “B” to set an example on the ice and in the community. And good news for Boston fans all over New England — I don’t think this admirable trend is going away anytime soon!