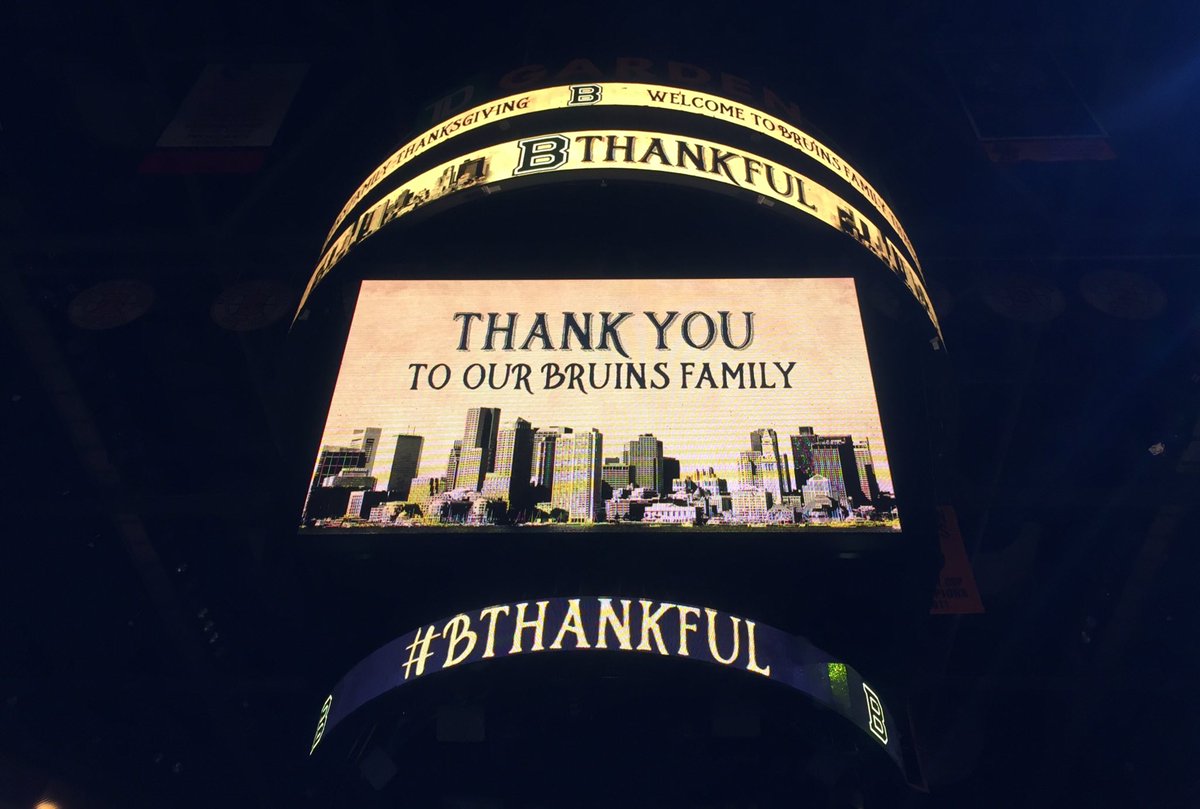 The Boston Bruins have not been on the gravy train lately, despite this week being as gravy-filled as it gets. Yet, even with all the injuries, all the setbacks, all the ups-and-downs & inconsistent consistency, they’re still fun to watch, competitive as hell and right in the thick (gravy) of both the Atlantic and Wild Card races — not bad when you consider the Thanksgiving Day demarcation line for playoff prognostication.

Great piece on how certain #NHLBruins stepped up this weekend with injuries mounting by @Mike_Cratty https://t.co/zojJHt0uvI

In short, the B’s have a lot to B Thankful for (as their annual Turkey Day festivities pictured above like to remind us), both on AND off the ice this season. And yes, that’s even WITH the recent Bergeron bad luck, Chara news and entire D-core sidelined for the better part of a month (with practically the entire P-Bruins roster playing in their stead). Here’s why:

As fellow Black N’ Gold blogger @phoneymahoney pointed out in a recent puck-poignant post, the team has truly “held things together” like none other recently. They’ve picked up points in a few games they had no business to, even getting some rookies on the score sheet with their first ever NHL goals (and saves).

Jeremy Lauzon with the final save of the night. What an ending. pic.twitter.com/SV2xX2xsul

The team has also kept pace in the yes-I-know-it’s-way-too-early-to-be-calling-it-a-playoff-race competition between the Bolts, Leafs and… I can’t believe I’m typing this… Sabres & Habs. What the Buffalo wings with Blu (Blanc et Rouge) cheese is going on!? Disgusting thoughts aside, the B’s are finding ways to stay in games and will need to continue to do so each & every contest if they want to stay in the playoff picture, which I think they will.

🎥 #NHLBruins coach Bruce Cassidy reacts to the returns of Charlie McAvoy and Urho Vaakanainen to practice and the news of Patrice Bergeron’s injury: pic.twitter.com/bXGwMLNZAJ

The B’s also have a coach who deserves plenty of “Thanks,” especially for his always candid & accessible interviews about player health, recovery, line-up decisions & more. There’s no greater test or challenge for a head hockey honcho than to constantly have a roster in flux, never truly knowing when it’ll be back to 100%. Bruce Cassidy has done a remarkable job keeping his players honest, motivated & committed to the team’s game-plan during this horrid injury stretch. And the fact they’re competing and not throwing in the towel on a nightly basis also shows you that the mutual respect the players have for him and his staff is palpable & purposeful. Both sides of this equation will need to stay constant if the B’s are going to stay afloat (in the gravy dish) throughout this holiday weekend and all thru the next one.

David Krejci and Bruce Cassidy discussed what kind of adjustments the Bruins will have to make with Patrice Bergeron out. https://t.co/lMQd1v3JaU pic.twitter.com/5lxWPyeatj

#NHLBruins captain Zdeno Chara will celebrate this Thanksgiving by donating and delivering $2,000 worth of pies to local shelters: https://t.co/U1gPNk0tiI

Fans can also give back by donating $33 to benefit struggling families here: https://t.co/TpHn2S43Sz pic.twitter.com/e0HVJkZzmk

When it comes to the team’s community work this time of year, you won’t find a more generous group of players, personnel & Bruins staff truly “giving back” in ways everyone can be thankful of and for. From Zdeno Chara donating pies to local shelters around the Greater Boston area to members of the entire organization hosting the 23rd Annual Table of Friends event, all associated with the Black N’ Gold have been gobbling up good tidings to those in need this Turkey Day season.

Members of the #NHLBruins organization joined @tdgarden and the @CityofBoston for the 23rd Annual Table of Friends on Tuesday.

The event, hosted by Garden Neighborhood Charities, has helped feed more than 13,000 homeless men, women, and children over the last two decades. pic.twitter.com/JIcyRhpVIc

And when you see this kind of commitment to community on a consistent basis, it makes the play on the ice more forgiving during the tough stretches. In short, the B’s are a team you can root for indoors and outdoors, while playing the game and promoting it, during the thrill of an Original Six match-up or when matching up with a great group for a good cause.

I’ll take a helping of that not just every Thanksgiving holiday week, but every week. With a side of gravy, no doubt!