The last time these two teams faced each other at the TD Garden, Toronto was served a nice big bowl of pasta. Three bowls to be specific. Coming from a huge loss against Vancouver, the Bruins redeemed themselves with a 5-1 win over the Maple Leafs. David Pastrnak had his third NHL career hat trick that night. Patrice Bergeron scored a goal and Brad Marchand had two assists that night.  In the two weeks thereafter, the first line had to change a bit as things needed to shift when news came out that Boston yet again will be down a player. With a collective groan, the team would lose Patrice Bergeron for at least four weeks due to an upper-body injury. Luckily, many are slowly returning as the Bruins welcome back defenseman  Kevan Miller last week.

“We know that they’re skilled and fast, they want to get going. We’ve got to make it tough on them."

The Bruins will once again for the second time this season face their Atlantic Division foes as they play against the Toronto Maple Leafs tonight at the Scotiabank Arena. With Boston bleeding out some wins and playing with fresh-faced Providence youngsters, Toronto has  steadily remained third in the Atlantic Division,  posting a 16-8-0 record. Boston has been biting at their heals as they hold down 1st in the wild card position. The Leafs have been without their star player 21-year-old Auston Matthews who had suffered an injury on October 27th in a game against the Winnipeg Jets.  Since losing Matthews, Toronto has been 8-5. Along with the center being out, the signing of William Nylander has been a hot topic for Toronto. Coach Mike Babcock recently mentioned that he expected both players to be back with the team, along  with the singing of Nylander prior to the December 1st deadline.

For Toronto, right wing Mitchell Marner leads the team with 30 points as he netted six goals with 24 assists. Not far behind him is John Tavares at 27 points with 15 goals plus 12 assists. The Leafs are coming off a 6-0 win against the Philadelphia Flyers. Andreas Johnsson scored three goals in the first period for his first NHL hat-trick. Tavares would also score while Marner has two assists.  Patrick Marleau will play his 1,600th NHL game tonight as he faces the Bruins.  Frederik Anderson is expected in goal tonight. 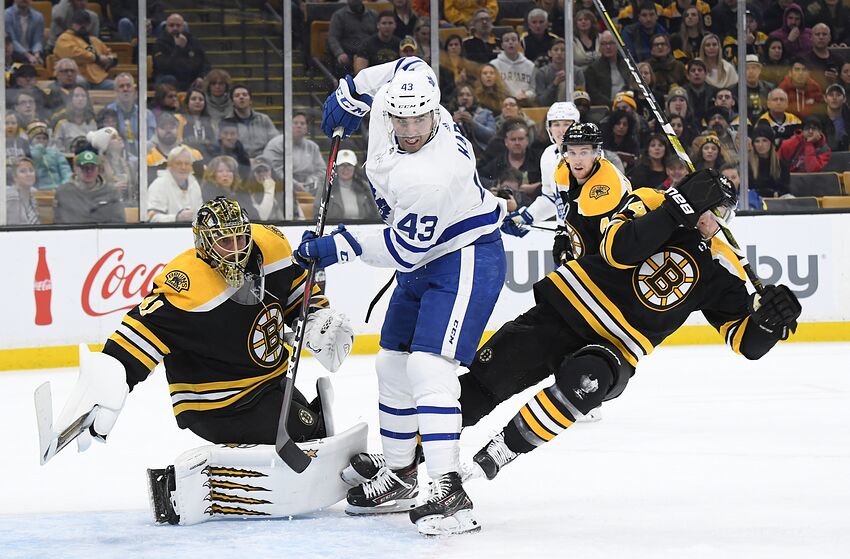 The Bruins recently held on to win a nail-biter of a game against the Montreal Canadiens in a 3-2 decision at the Belle Centre. Secondary scoring has been the issue for the Black and Gold this season, however the time to shine couldn’t come soon enough for many players. David Backes had his best game against the Habs with four shots on goal that forced two turnovers-one leading to the opening goal. With a host of D-men and Bergeron out with injury, the hustle of the fourth line has been huge for the Bruins. Backes joined Sean Kuraly and Chris Wagner on that line against Montreal and took a  high stick that led to a four-minute minor towards the end of the third period.

Both David Pastrnak and Patrice Bergeron have 26 points with Pastrnak leading the team in goals (17). Bergeron is at nine goals with Jake Debrusk (10) second to Pastrnak. Goaltender Jaroslav Halak is expected to start in net.  Here was today’s morning rushes :

WHERE TO WATCH: NESN, TSN4, TVAS

Check out the available tickets from our advertising partner SeatGiant for your next Boston Bruins game. Click the link below and when purchasing any event ticket, from the NHL, NBA, MLB, NFL to concerts and shows, please use discount code BNGP to save a little money. Thank You!