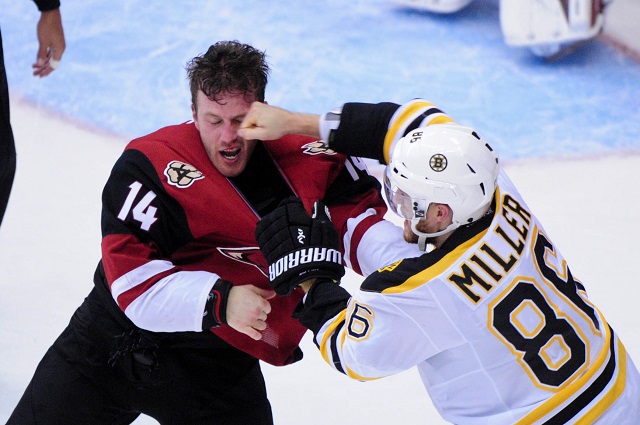 To say the Boston Bruins are going to need a lot of punch to their game during the second half of the season (which started this weekend with a big W over Buffalo), well… that would be an understatement. A punch to the gut, if you will (or to the head if you’re throwing down like Kevan Miller, as pictured above). That’s because in order to avoid being punched out of the playoffs come ticket-punching time in April, the team will need to fight, finagle & finish and skate, scrap & score up until the very last second of every game between now & then. Look no further than their last four games, and no, I’m not pulling any punches like a “frightened Frolik” would:

The Eastern Conference playoff picture right now, especially the B’s own Atlantic Division, is as tightly framed as an on-loan Picasso to Mass MoCA. It’s something you can keep looking at, yet you’ll come away with a different perspective after each viewing. In other words, it’s artfully maddening — just like the B’s oh-so-skilled scorers who all-too-often would rather razzle/dazzle us than shoot the puck (I’m looking at you, Brad Marchand). At least, that’s my interpretation…you know, because “art” can be subjective.

While on that subject, an almost-in-contention-for-the-ART-Ross-trophy David Pastrnak will need to –just like his top line mates– have zero “off games” down the stretch if the B’s are going to seriously stay in the hunt for either the third seed or a wild card berth. The B’s have been fortunate enough to make the most of secondary scoring during their recent 4-game winning streak (hats off to the spirited 4th line play of Wagner, Kuraly & Acciari), but as anyone who watches this team with even one eye open knows, Boston lives & dies by the play of the 1st line 88% of the time (that number was intentional). That doesn’t mean they won’t steal a few games 2-1 or 3-2 like they deservedly did against Buffalo both before & after the New Year (“4-point games” as we like to call them), but the B’s have THE BEST chance at going on a 2017-’18-esque run here in the second half of the season by the likes of Bergy, March & Pasta serving up their best play.

He became the first #NHLBruins player to reach the 50-point milestone within the team’s first 40 games of a season since 2006‑07.

***WARNING: all members of the THC (Tuukka Haters Club), please log off your browser!

Mr. One-win-shy-of-250 Rask, who looks as calm, confident & composed between the pipes since that aforementioned epic run of games-with-points last season. If he can keep the good goalie vibes going AKA keep the B’s “in the game” up until the 3rd period, then you can expect the team to respond accordingly and tack on a few more historic wins for Tuukka.

Tuukka Rask earned his 249th regular-season win of his NHL career (all w/ BOS) to move within three of tying Tiny Thompson (252) for the most by a goaltender in @NHLBruins franchise history. #NHLStats #BUFvsBOS pic.twitter.com/nFp9GAkf7J

The same can be said for Jaroslav Halak who despite letting in a few more goals than he’s used to in his last few starts has consistently been as dynamic of a netminder as you’ll see in the NHL this year. Look no further than my favorite but oft-forgotten goalie stat (GSAA) to see just how impactful he’s been between the pipes:

No matter who head coach Bruce Cassidy decides to start, he’s got the best 1-2, or perhaps better put 1A-1B, punch in the league right now. So quit your bashing, bemoaning & b!tching B’s social media (not all of you… just some), because the team needs both Rask AND Halak to stay where they are in the standings… and maybe even gain a bit of ground on Toronto.

*Bruins get blessed with 2 outstanding goaltenders*

Can we just appreciate both goalies equally? #NHLBruins

Shifting gears to some on-ice shifts we’ll need to see more of here in the second half, the B’s must allow the “Kid Line” to develop, prosper & produce. Outside of the scenario where one or two of these guys may be traded, along with a pick, for a Brayden Schenn or someone similar, the trio of Donato-JFK-Heinen looked as solid as they have all season in the win over the Sabres. The line produced multiple chances, had some skillful puck movement & management, and even saw some PK time (well at least JFK did).

The Kid Line is getting chances! Maybe they’ll get the next one?? #BOSvsBUF #InOurBlood #NextManUp #NHLBruins

I thought for sure they’d eventually score, but if they are allowed to stick together and further develop that exciting, youthful chemistry, then more goals will be exactly what’s in store (and in the net) for all of them. After all, when you mix together hockey smarts & IQ (JFK), lethal sniping and goal-scoring ability (Donato) and solid two-way play (Heinen), you have a combo that’s destined to deliver (sound/look familiar?)!

So, what will the rest of the season’s second half deliver? Well, here are the guarantees: a tough-as-nails schedule where the B’s will spend a lot of time playing non-divisional opponents, a big West Coast kick (as featured in my Mark Your Bruins Calendar series), and 6 back-to-backs (3 of which feature teams who will also be playing for their playoff lives). Outside of those guarantees, here’s what you should expect: must-see hockey nearly every time the Black N’ Gold take the ice. Because, “B”-lieve me, there’s plenty to fight for ahead of everyone’s favorite season: the postseason — no punching-up needed!

*For more insight into the B’s second-half, check out this week’s puck-perfect podcast:

Check out this week’s episode 113 in partnership with @SeatGiant! Use discount code BNGP at https://t.co/gj25EUgi0I for your #NHLBruins⁠ ⁠ tickets! This week @00EvanMichael joined us to talk B’s and season second half. #PodernFamily ⁦@SoundCloud⁩ https://t.co/zt3Qg0gsIZ