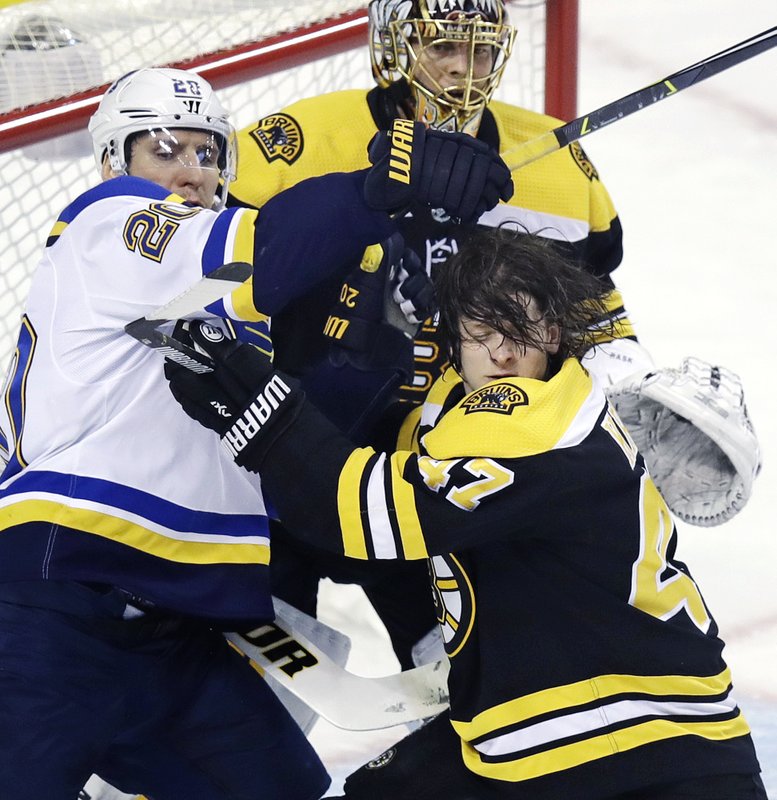 At one point winners of five of six games to start the new year, the Bruins now find themselves losers of their last two. A chance stood in front of them to avoid extending their losing skid against a St. Louis Blues team that has had a turbulent season.

Just over a minute and a half into the game, Jake DeBrusk redirected a feed from David Krejci within centimeters of squeaking under Jake Allen’s pad and in. Other than that, it was a pretty black and white start to the game until things got interesting when David Pastrnak went off for two thanks to a high sticking penalty. The Bruins killed the penalty and kept this one scoreless for the time being.

Zdeno Chara fought for the first time since March 1st of last season against Jamie Oleksiak, this time against Patrick Maroon.

It was a fairly quiet period overall. The Bruins outshot the Blues 10-8. Momentum was surely up-for-grabs headed into the second period.

Peter Cehlarik found himself in the box early on in the period for tripping. St. Louis didn’t convert on the power play but Torey Krug converted at even strength off of a crazy feed from Krejci shortly after penalty concluded. Krug’s fifth of the season was assisted by Krejci (28) and Cehlarik (1).

What a feed from David Krejci. 5th of the season for @ToreyKrug #NHLBruins pic.twitter.com/rcA2mcSkoH

Just 52 seconds later, Tuukka Rask made a fantastic sprawling save on Ryan O’Reilly, but couldn’t corral the rebound and O’Reilly tied the game at one. St. Louis got the next one thanks to Carl Gunnarsson with 6:24 remaining in the period – 2-1 Blues.

Shortly after, Robert Bortuzzo went to the box for cross-checking. The Bruins took full advantage of being a man up. Zdeno Chara sent a cannon at Allen that was tipped by former St. Louis Blues captain David Backes as he was being knocked over. Backes’ fifth goal of the season was assisted by Chara (3) and Krejci (29). Two assists for Krejci on the night.

David Backes PPG ties it up 2-2 against his former team #NHLBruins pic.twitter.com/OmUxPcA0a8

Chris Wagner went to the box for tripping not too long after the goal. With 29 seconds left in his penalty, St. Louis took a too many men on the ice penalty, making it 4-on-4 temporarily. Neither team scored before the end of the period, leaving the Bruins with 11 seconds left on their power play heading into the third period. Shots in the period were 11-8 in favor of the Blues, and 21-20 Bruins overall. It was anyone’s game heading into the third period.

What a finish by Chris Wagner.

After Wagner barely missed an empty netter, Sean Kuraly made up for it and iced this one – 5-2 Bruins. Krejci’s 30th assist of the season on Kuraly’s sixth goal was his third of the night, Wagner also had an assist (5). Tuukka’s win tied him with Tiny Thompson for the most in Bruins history at 252. The final shots were 30-27 Blues and 10-6 Blues in the period. Next up are the New York Rangers on Saturday at 7:00 PM ET at TD Garden.