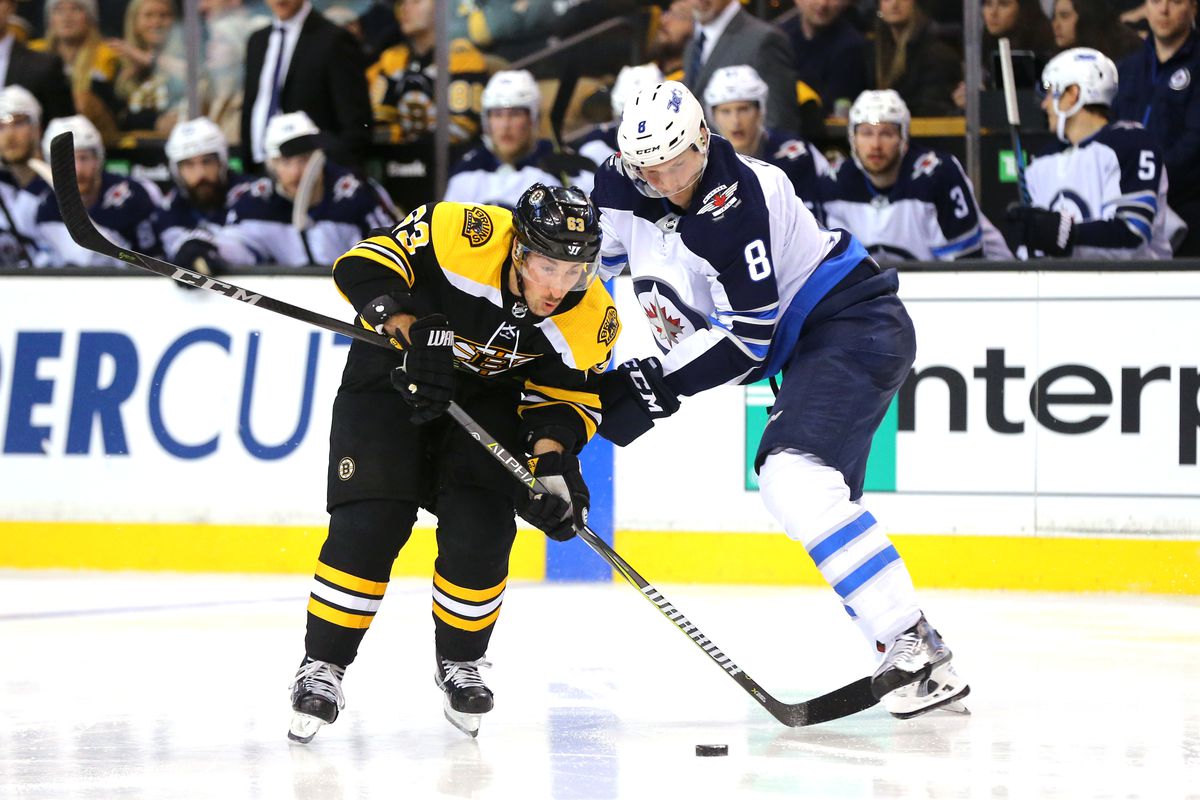 Winnipeg came into this one on the second half of a back-to-back on the road, losing to the Philadelphia Flyers on Monday night. Trent Frederic made his debut in the Bruins’ first action coming back from the All-Star break. In doing so, he becomes the first Bruin ever to wear the number 82.

Mason Appleton went to the penalty box early for Winnipeg for holding, giving the Bruins a chance at an early lead. Unfortunately for them, they couldn’t convert. The offensive tempo was heavily in favor of the Bruins from the start and Patrice Bergeron converted on a one-timer from his sweet spot towards the slot. Bergeron’s 15th goal of the season was assisted by Brad Marchand (35), and David Pastrnak (30).

With 6:12 left, Brandon Carlo went off for cross-checking. Josh Morrissey scored eight seconds later to tie the game up. After that, Zdeno Chara went to the box for slashing. The penalties kept coming after Chara’s was killed off, as Blake Wheeler went off for tripping. Penalties on top of penalties. Pastrnak made them pay with his 28th goal of the season off of one of his vintage one-timers. Half of his 28 goals have been scored on the power play. Marchand’s assist on the goal was his 36th.

The shots were 20 to 8 in favor of the Bruins, marking a busy first period for Hellebuyck, who made some wild saves. The momentum was on the Bruins side heading into the intermission.

It was a pretty standard period until Jacob Trouba went off for slashing. Both teams struggled to generate a lot of shots in the period. The Bruins never really picked up where they left off from a momentum standpoint to start the period.

Brendan Lemieux got mad at Jake DeBrusk for cutting hard towards the net and colliding with Hellebuyck. That was weird. Kevan Miller and Adam Lowry injected some life back into the game with around four minutes left with a fight following a big hit on Brandon Tanev by Miller.

Frederic found himself tied up with Tanev shortly after, and Frederic teed off on Tanev’s face and easily won the fight. David Backes was tied up initially, so it was fitting for Frederic to get back up his childhood idol.

"It’s not what I’m trying to be, just a drop-the-gloves guy. But yeah I’m willing to do it.

That was an insane fight. The last four minutes helped set up a potentially crazy third period with a game that was up-for-grabs. The shots were 9 to 5 in favor of Winnipeg, and were 25 to 17 Boston after two periods.

Kyle Connor tied the game at two just about 15-and-a-half minutes into the period, thus making things interesting as intermission winded down. Not once, but twice, Connor struck again for his second goal in 34 seconds, 3-2 Jets.

A scrum at the Winnipeg net fired up a video review to see if the puck squeaked past the goal line. The evidence wasn’t conclusive, so the call on the ice stood, no goal.

Find me a more textbook body check than this one from #NHLBruins David Backes. I’ll wait pic.twitter.com/PDcEIQvN7u

Bergeron got the Bruins back on the board with 8:21 to go on his second goal of the night and 16th of the season. Marchand’s third assist of the night marked his 37th, and Pastrnak’s second assist marked his 31st of the season and third point of the night. The top line really came to play tonight. Although not being on the scoreboard, the second line created a lot of chances as well. Tie game.

The Bruins tie it up and guess who? It’s Patrice Bergeron!

Brendan Lemieux tried to do something useful by going after Carlo. I don’t imagine the size disadvantage on his end would have served him well in a fight there. An intense end to the game was for nothing as regulation ended in a tie. The shots at the end of regulation were 38 to 25 Bruins, 13 to 8 Bruins in the period.

Marchand, Bergeron, and Krug for Boston, Scheifele, Wheeler, and Morrissey for Winnipeg to start. It was an entertaining overtime period but no winner was declared. Shots were 2 to 1 Winnipeg.

Bruins lose 4-3. Final shots were 39-27 Bruins. Next up are the Philadelphia Flyers on Thursday at TD Garden at 7 PM ET.