As the Bruins return to the ice after enjoying a mandatory bye-week, news came that goalie Tuukka Rask will be placed on injured reserve after suffering a concussion in a collision with Rangers forward Filip Chytil.  Up until that unfortunate incident, Rask had been enjoying a streak of great playing in the net and with a win against the Rangers, was poised to become the winningest goalie in the franchise history. With this little bump in the road, however, that record will be on hold for a just a little longer.

So this poses a thought that many fans and sports analysts have written time and time again in regards to Rask. Yes, he will break a record, but will surpassing Thompson earn Tuukka respect from the fans? Will he ever be considered one of the greats? These questions tend to be a bit controversial even amongst the Black and Gold faithful and there’s never a shortage of online Tuukka hate.

So when you talk about the greatest goalies that ever wore the spoked-B, can you and should you include Rask? If you take a quick peek into Bruins lore, you’ll find a pretty extensive list so we shortened it to highlight the big names. Let’s take a look at those who are considered to be the best in Bruins history (keep in mind, these are in no particular order and just the opinion of this writer).

For someone who wasn’t exactly crazy about being a goaltender, Thompson has certainly made his mark in Bruins history.  And it would be his goaltending that lead the Bruins to win their first Stanley Cup. Fun fact: he only allowed three goals in five playoff games and posted three shutouts. His excellent net-minding bode well for a young Bruins team. They finished in first place and won the Prince of Wales Trophy in 1929, 1930, 1931, 1933, 1935 and 1938. Thompson won the Vezina Trophy in 1930, 1933, 1936 and 1938.

Most memorable moment: the 1933 Playoffs. In a match-up against the Toronto Maple Leafs,  Thompson and Leafs goalie Lorne Chabot would be part of one of the longest overtime games played. Both goalies battled up until the sixth overtime when Leaf’s forward Ken Doraty scored the winning goal against Thompson.

“Tiny was such a great goaltender. I had to be good or they would have chased me right out of Boston”-Frank Brimsek

With Thompson being sent to Detroit,  a young 23-year-old rookie named Frank Brimsek would be thrust upon a tough Boston crowd. Brismek had to fill the mighty skates of one of the league’s premier goaltenders. Thompson was Boston’s rock-solid goalie for ten years and Brimsek would quickly learn that to be the best, you gotta beat the best.

Sadly, he would lose his first professional game as a Bruin against the Montreal Canadiens. Brimsek wouldn’t let the loss keep him down for too long.  “Mister Zero” would quickly rebound by winning shutout after shutout. By his third game, he had already recorded 192 minutes and 40 seconds of scoreless goaltending.

In his fifth game with the Bruins, Brimsek would beat Thomspon’s record of 224 minutes and 47 seconds scoreless goaltending at 231 minutes 54 seconds. The B’s would win that game against Montreal 3-2 at the Boston Garden. This was all done his rookie season. He finished with a 1.59 average with 10 shutouts. He gave up only 70 goals in 44 games played and was awarded both the Calder Trophy and the Vezina Trophy. He would win the Vezina again in 1942. He would play for Boston for five seasons before enlisting in the United States Coast Guard. He retired at 34 and would become the first United States hockey player to be elected into the Hall of Fame. 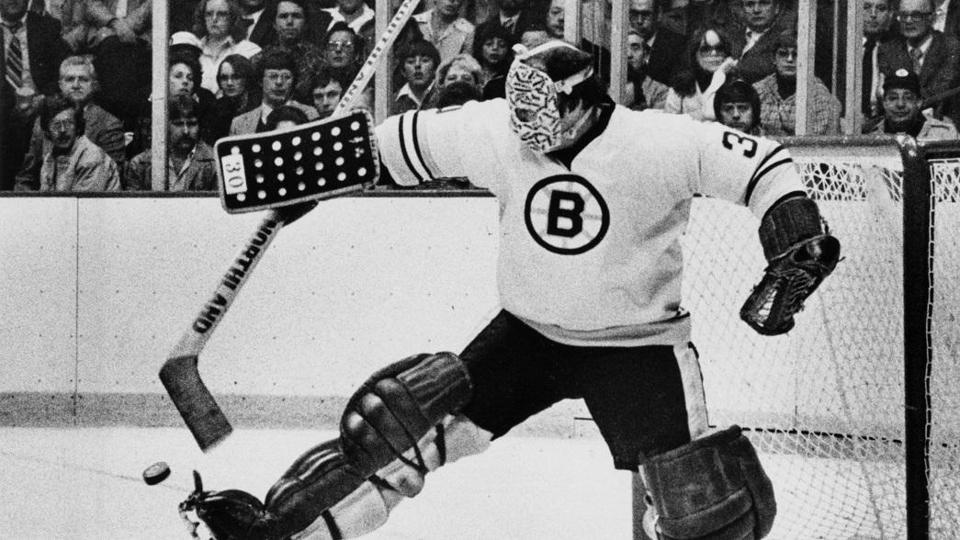 Fiercely competitive and equally feisty, Cheevers undoubtedly was a big, bad Bruin.  Just look at the mask. Along with Eddie Johnston, Cheevers would lead Boston to win the Stanley Cup in 1970 and 1972 and was voted the best goaltender in the World Hockey Association. He was also the number one goalie for Team Canada in 1974.

And if you’re into numbers, Cheevers certainly lives up to the hype. In his NHL career, he would play 418 regular-season games and 88 playoff matches. His GAA was 2.89 during the regular season and 2.69 in the playoffs. Impressive numbers if you consider that the Bruins team was offensively heavy and lacked defense-Cheevers had his work cut out for him.

During the 1971-1972 season, “Cheesy” Cheevers played 32 unbeaten games between the pipes. Originally he was destined to play for Toronto but as luck would have it, the Bruins grabbed Cheevers for $30,000 and the rest is history. After suffering a knee injury his rookie season, he was sent to Oklahoma City. There he met coach Harry Sinden who would promote Cheevers to take over for an injured Eddie Johnston. His first three games with the Bruins: a tie, a shutout win, and a 2-1 win. The following season, the Bruins would protect both Cheevers and Johnston in the draft.

Boston had quite the goaltending tandem: Cheevers played 44 games and averaged 2.83  with Johnston’s 2.87 in 20 games. Cheevers finally retired in 1980 and was inducted into the Hall of Fame in 1985. 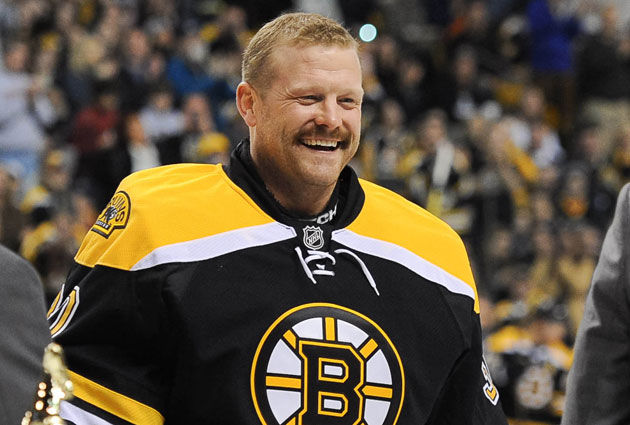 For what its worth, Thomas is included on the list as he lead the Boston Bruins to their first cup since 1972. But the win would be shrouded in controversy as stories emerged about Thomas’s combative personality, religious views, and far-right conspiracy theories. He would also infamously snub former president Barack Obama after the 2011 win for personal political reasons.

If you put aside the controversial aspect of Thomas’s personal views and just go by the numbers, you have a two-time Vezina Trophy winner, Conn Smythe trophy winner and the recipient of the William Jennings Award. He is one of four American-born players to win the Conn Smythe Trophy in NHL history, joining Brian Leetch, Jonathan Quick, and Patrick Kane.

During the 2010-2011 season, he would set an NHL record with a .938 save percentage. In the Stanley Cup Finals against the Vancouver Canucks, Thomas had a 1.15 GAA, breaking Brisek’s record of 1.25 GAA. Thomas would go on stop all 37 shots in Game Seven to win 4-0, leading Boston in finally winning the Cup after 39 years.

He would also set the record for most saves in a single post-season with 798 and the most saves in a Stanley Cup series with 238. Thomas also became the first goaltender to post a shutout in a Game 7 road game. Thomas would take the entire 2012-2013 season off before briefly returning to play in Florida and Dallas during the 2013-14 season.

Tuukka Rask. One could go online and simply type his name and you’ll be faced with an onslaught of supporters or haters. Then there’s the million and one articles that analyze whether or not Rask will ever get a fair shake in Boston-being one of the toughest markets to play for. Once in a while, you’ll see the question on whether or not the Bruins will ever win a cup with Rask. And while he was the back-up goalie to Tim Thomas and technically he does have a ring, Rask needs to win the Cup on his own merit to quiet his critics.

The tough thing about Rask and what’s most criticized is his play inconsistency. When he’s hot, he hot, but when he has those slow starts to the season, calls for a trade pick up online at full steam. As he is set to overtake Tiny Thompson’s record of 252 wins, it’s kinda hard not to place Rask as one of the top goalies in Bruins history.

As mentioned at the beginning of the article, Rask was on a hot streak before suffering a concussion. So as opinions wane back and forth about Tuukka, in the end,  seeing number 40 hoist the Cup would be nothing short of greatness and just maybe the Tuukka hate will be a distant memory.