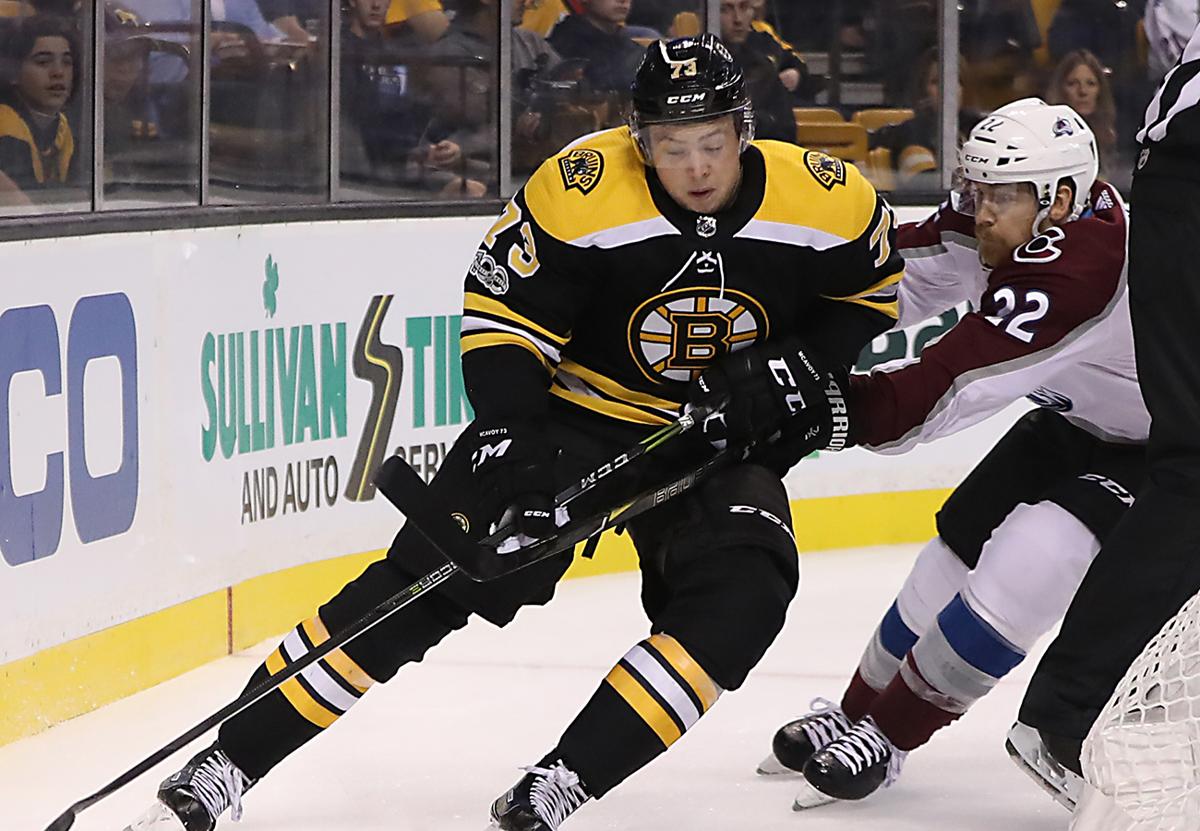 The last time the Bruins beat the Avalanche at TD Garden (March 30, 1998), these movies were still in theaters:

Titanic
Good Will Hunting
The Big Lebowski
The Wedding Singer

In all six of their previous matinees, the Bruins have found the win column. Making it seven was certainly on the agenda. The excitement of Saturday’s matinee against the Los Angeles Kings and the “Beat LA” chants started off the weekend in thrilling fashion. Not to mention the excellent tribute to Patrice Bergeron’s 1000th game milestone.

Danton Heinen incidentally caught Erik Johnson up high with 10:06 to go – making things interesting in an otherwise pedestrian start to the game on both sides. Thankfully for their sake, the Bruins killed off the penalty.

Heinen high sticks Erik Johnson, around six-and-a-half minutes later, Gabriel Landeskog trips Heinen. A minute and eight seconds into the Boston power play, Torey Krug hooked Matt Calvert in front of the net to make it a 52 second 4-on-4 with 2:33 to go.

Nathan MacKinnon broke the ice by potting a power-play goal right under the crossbar with 33 seconds to go. That lead carried into the intermission, giving Colorado a chance to make good on their momentum heading into the second period. First period shots were 12 to 7 Colorado.

MacKinnon found himself with the back of the net in his sights early on in the period in what was a fast start for the Avalanche. The fast start didn’t last long as John Moore found the back of the net to even things up thanks to a great shot and a screen by Bergeron. Before the goal, Charlie McAvoy laid a great hit on fellow Boston University alum, Matt Nieto. A scrum highlighted by Brad Marchand and former Bruin Carl Soderberg ensued after the goal. There was a whole lot going on. 1-1 with 16:20 to go. The goal marked Moore’s third of the season, assisted by McAvoy (13), and Marchand (44).

An opportunity to take their first lead of the game came in the form of MacKinnon putting the Bruins on the power play with a holding penalty on Sean Kuraly. Not too long after Soderberg interfered with McAvoy to create a 34-second 5-on-3 for the Bruins. MacKinnon caught a homerun pass out of the penalty box only to be stopped by Jaroslav Halak with a massive save to keep the game tied. This game escalated very quickly.

Despite a brief 5-on-3 and some solid chances, the Bruins couldn’t convert on the man advantage.

In the final minutes of the period, Moore attempted to wrap the puck around Colorado’s zone. While on the dasher, the puck deflected towards the net and in, but it was quickly determined that the puck was out of play, so the goal was nullified.

THE BANK IS OPEN ON SUNDAYS pic.twitter.com/NjWVATn3RO

The shots were 15 to 12 in favor of the Bruins, and 24 to 22 Colorado overall. The second period set the stage for a wild third period.

Kuraly went to the box on a hooking call 7:16 in, generating plenty of boos from the TD Garden crowd. Following the conclusion of the Colorado power play. David Pastrnak and David Krejci came together for a nice scoring chance, but no dice. Neither team was budging.

With 2:15 remaining in regulation came a golden opportunity for the Bruins in the form of a power play thanks to a Sheldon Dries holding penalty. Krejci’s feed to Peter Cehlarik in the crease highlighted the power play, but again, no goals. The trend of not being able out games continues, marking the fifth time in their last seven games that viewers will get some free hockey. It was a true goalie battle through 60 minutes. At the end of regulation, shots were 34 to 31 Colorado, and 10 to 9 Colorado in the period.

For Boston, Kuraly, Moore, and McAvoy, and for Colorado, MacKinnon, Rantanen, and Landeskog to start the extra frame. Huge scoring chances came from both sides early on, to no avail. A backhand wraparound chance for Calvert, no dice.

Finally, Brad Marchand made it an undefeated weekend for the Bruins. Who else but Marchand in overtime? His shot from just above the circles deflected off of Calvert and in to end this grueling game. Shots in the extra frame were 4 to 2 Bruins, and 36 to 35 Colorado overall. Next up for the Bruins are the Chicago Blackhawks at home at 7:00 PM ET at TD Garden.