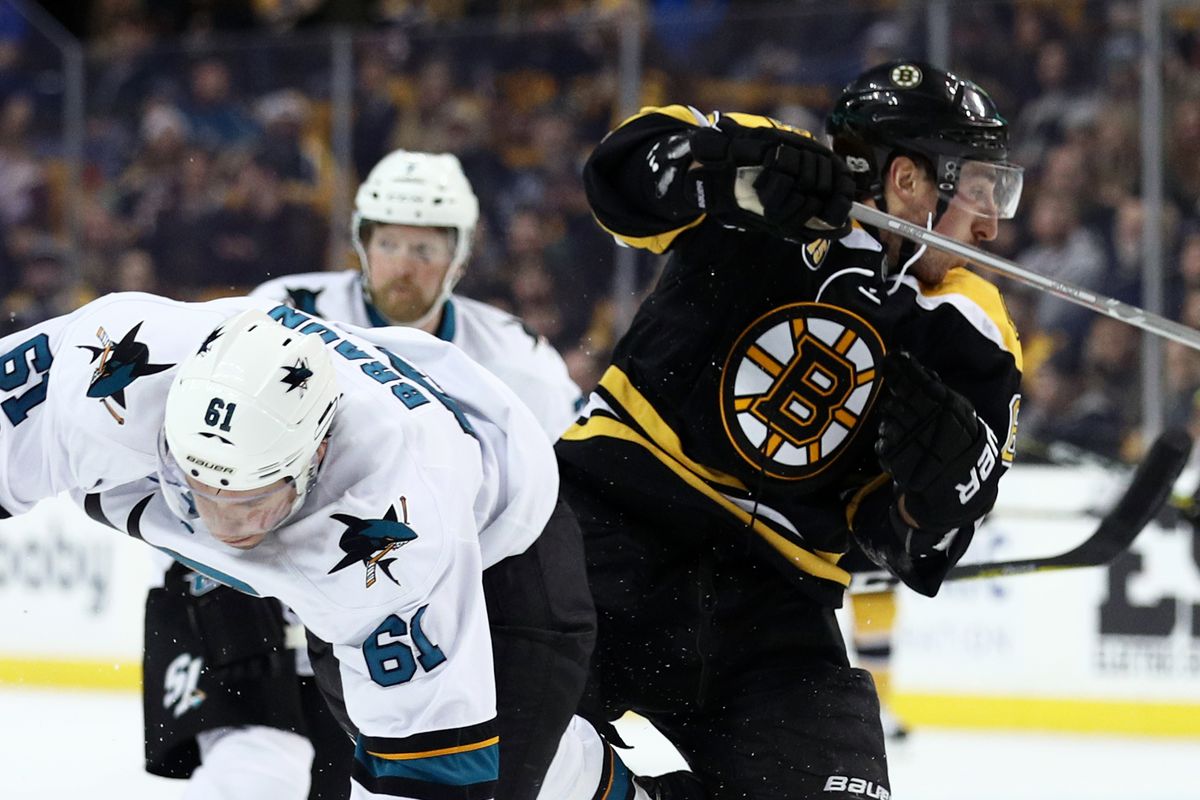 Last time the Bruins and Sharks played it was eight days ago, eleven goals were scored, and both looked a bit different pre-trade deadline day. For the Bruins, Charlie Coyle will make his home debut, Marcus Johansson will make his Bruins debut, and Gustav Nyquist will make his Sharks debut on the other side of things.

The offense came in favor of the Bruins early on, eventually leading to a power play just less than five minutes in. Both Coyle and Johansson saw some time on the power play, but the Bruins couldn’t convert. Not too long after the conclusion of the first Bruins power play came a chance for Joe Pavelski with space, only to be stopped by Halak. Marcus Johansson followed that up with a good chance of his own, but no dice.

San Jose’s first power play came in the form of a Matt Grzelcyk hooking penalty. The Sharks got on the board first off of an odd scramble out front buried by Logan Couture to put San Jose up by a goal.

After San Jose received a double minor for high-sticking at the expense of Jake DeBrusk, David Krejci fired a one-timer past Martin Jones to even things up at one. Krejci’s 15th goal of the season was assisted by Torey Krug (38) and Brad Marchand (48).

The Bruins doubled the Sharks up in shots, 16 to 8 in the first.

Things were fairly quiet until Charlie McAvoy buried his second goal against San Jose in as many games to give the Bruins the one-goal lead. McAvoy’s fifth of the season was assisted by Marchand (49), second of the game, and Danton Heinen (13). That wasn’t all as on the next shot, DeBrusk got in on the action on a crazy tic-tac-toe play with Johansson and Krejci. DeBrusk’s 20th of the season was assisted by Johansson (16) and Krejci (40).

JAKE DEBRUSK IS ON FIRE!!!!!! THE BOSTON BRUINS SCORE TWICE IN 37 SECONDS TO TAKE THE 3-1 LEAD!!! #NHLBruins pic.twitter.com/iaa2cOOYKa

That wasn’t all as Marchand continued the scoring after duking an ailing Erik Karlsson and slipping his patented backhand move behind Jones and in. 4 to 1 Bruins real fast. Marchand’s 25th goal and third point of the game was assisted by Patrice Bergeron (36). Marchand is now tied with Rick Middleton for most shorthanded goals in Bruins history with 25 of them.

Brad Marchand ties Rick Middleton for the most career shorthanded goals on the Bruins (25) #NHLBruins pic.twitter.com/ccaCFB61Ld

Following a power play in which the Bruins didn’t score on. Chris Wagner found himself tied up with Barclay Goodrow in a brief scrap, not much came of it. John Moore then went off for cross-checking with less than two minutes to go. Each team had half the amount of shots they had in the first, bringing the game total to 24 to 12 Bruins.

Evander Kane got his due after some previous beef with Kevan Miller and a scrap with Sean Kuraly at the hands of Zdeno Chara. Kane got kicked out of the game after the fact and got sent to the Principal’s office, as coined by Jack Edwards. A seven-million dollar misconduct.

Shortly after, Noel Acciari found his way down the tunnel after inadvertently redirecting a puck into his face. He was understandably in some good pain. Then another quick scrap came between Micheal Haley and David Backes. This game got progressively crazier as time passed.

Outside of the craziness, it was a pretty black-and-white third period. The shots in the period were 8 to 8, and 32 to 20 Boston overall. Jaroslav Halak played well with 19 saves in the win. The Bruins just keep winning, well minus the St. Louis game, but you get the point. Next up for the Bruins are the Tampa Bay Lightning at TD Garden on Thursday at 7:30 PM.