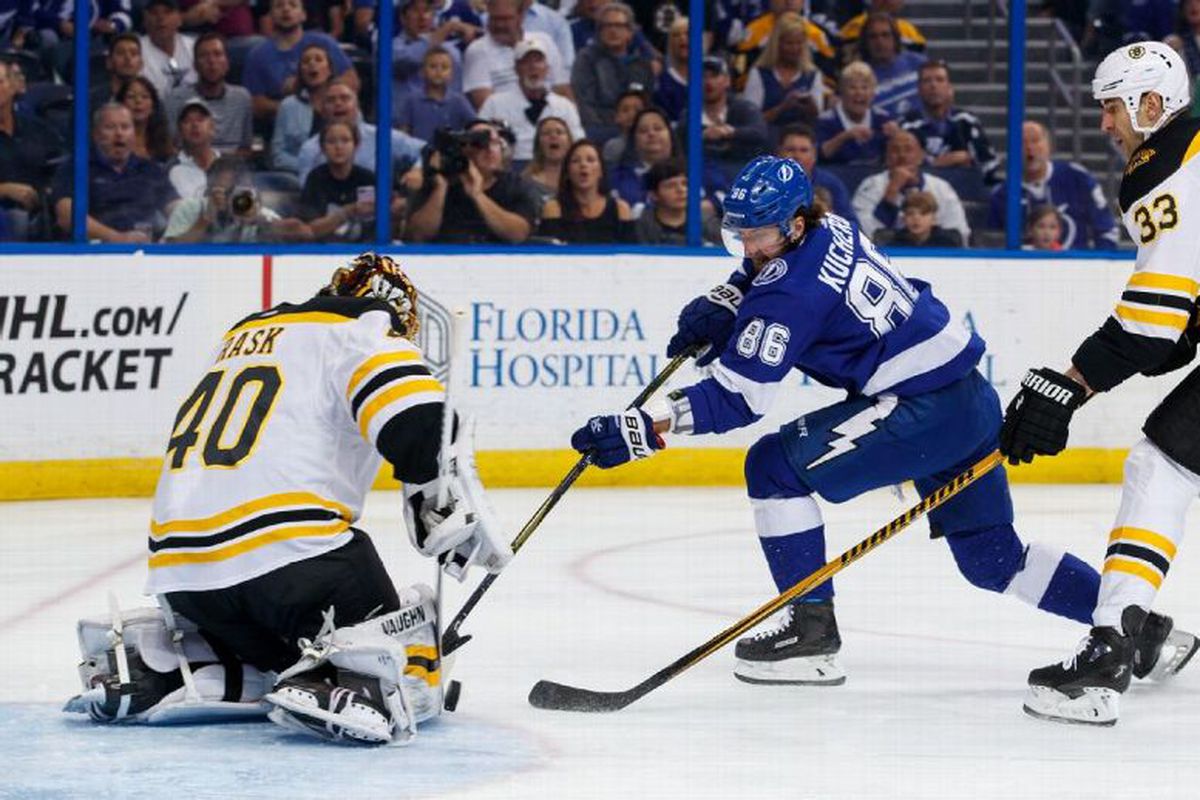 The Bruins rode a four-game winning streak into this one. Last time they faced Tampa Bay back on Feb. 28, the Bruins dominated. They were hoping for much of the same this time around.

Connor Clifton got the blood flowing with a huge hit on Ondrej Palat.

Tampa Bay struck first just 6:42 into the period. Steven Stamkos buried a one-timer from his wheelhouse on the off-wing. Some pretty poor defensive coverage hurt the Bruins there.

46 seconds later David Pastrnak drew a penalty on Nikita Kucherov. Tampa Bay’s penalty kill is the league’s best, the Bruins power play is third. The Bruins made no mistake in responding quickly as Brad Marchand potted a one-timer off of a feed from Pastrnak. Marchand’s 33rd of the season was assisted by Pastrnak (38) and Patrice Bergeron (43). Marchand’s road to 100 points makes its next stop at 93.

Stamkos struck again after a crazy bit of passing, again from his wheelhouse on the off-wing. It was 2-1 Tampa Bay with 5:02 left in the period. Then what do you know? Same as last time as Tampa Bay took a penalty shortly after they scored. First, it was J.T. Miller, then it was Alex Killorn to make it a 5-on-3. The Bruins had scored three 5-on-3 goals entering this man advantage.

Just 32 seconds of power play time lingered into the second period. Shots in the first were 9-4 Tampa Bay, so there was certainly room for improvement when it came to generating a sufficient amount of offense.

Karson Kuhlman’s early penalty didn’t end up hurting the Bruins, but it’s certainly not what they wanted. Thankfully for their sake, they killed the penalty successfully.

The theme of taking a penalty after a goal continued as Zdeno Chara went off for hooking shortly after the goal. Despite some decent looks, Tampa Bay didn’t convert.

Brandon Carlo made no mistake on a pass from David Krejci for his second of the season, giving the Bruins their first lead of the night. Krejci’s assist was his 46th of the season, ironically enough, Jake DeBrusk notched his 13th assist on the goal as well. The goal marked Carlo’s first in 44 games.

Brandon Carlo's first goal in 44 games puts the Bruins ahead of Tampa Bay.

Marchand’s road to 100 went up a notch to 94 on his second goal of the game, and it was certainly a weird one. His own shot hung in the sky before he deposited it for his 34th of the season. Like his first, Pastrnak (39) and Bergeron (44) had the assists.

Marchand's 2nd of the night gives Boston a 4-2 lead. pic.twitter.com/dWcOocvVhj

Connor Clifton laid another huge hit on Mathieu Joseph, as if the Bruins didn’t have enough energy. A huge chance followed for Tampa Bay not too long after that hit both posts, but didn’t go in.

A great period really gave the Bruins a stronghold on the game’s momentum. Despite not generating as many shots as Tampa Bay again, they made them count.

A Steven Stamkos hat trick bid was thwarted by Rask, but Victor Hedman crashed the net hard and potted the rebound to make it a one-goal game.

Things got worse as Pastrnak went off for four minutes for high sticking. Tampa Bay is the last team you want to kill a four-minute penalty against. Brandon Carlo made a huge blocking stop late in the kill and the double-minor was killed successfully.

Andrei Vasilevskiy made a miraculous save on Pastrnak and unfortunately for the Bruins, the rebound found its way on to Kucherov’s stick and in the back of the net. Tie game with less than seven minutes to go. The Bruins were getting thoroughly outplayed for most of the period thanks to Tampa Bay’s suffocating forecheck.

The last thing that you want at this point? A penalty. Charlie McAvoy took a hooking penalty with 2:58 to go in the third. Tuukka Rask made a massive glove save on a shot through Miller’s screen from Kucherov. Despite a pretty solid defensive effort, Anthony Cirelli broke free in the slot and put a half slapshot past Tuukka Rask to take the lead with 52.2 seconds left in regulation.

Marchand’s late penalty iced things for the Bruins with 38.4 seconds to go and that was it. In a game that had a playoff atmosphere, Tampa Bay’s dominant third period was the difference. The final shots were 28-17 in favor of the Lightning. Up next for the Bruins are the New York Rangers at 7:30 PM ET at TD Garden. This is a tough one to swallow.