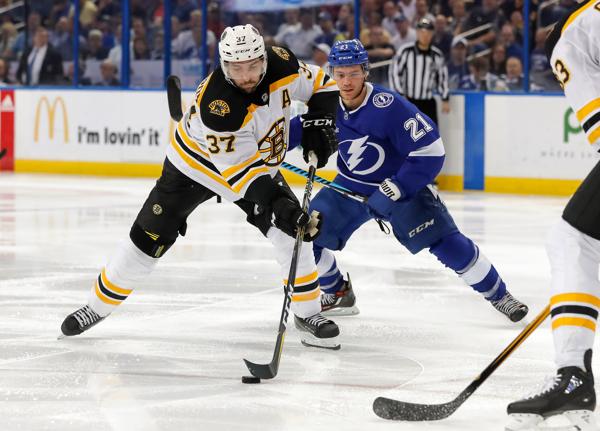 The boys in Black and Gold are back home playing their final season matinee game against the Tampa Bay Lightning. With a win this afternoon, Boston can notch their 50th win for the second consecutive season and 11th in club history. The Bruins have won their past two games and both teams have punched their way into the Playoffs.

Boston defeated the Minnesota Wild this past Thursday, in which fans got to see the NHL debut of Providence’s Zach Senyshyn, who would go on to notch his first NHL goal. The Bruins are now at 107 points, tied with the Calgary Flames in the league and locked at finishing second in the Atlantic Division. The top line continues to dominate as all three players have tallied up points to lead the team, as well as being in the top five in the league.

The Tampa Bay Lighting come into the TD Garden looking to nab the NHL record for most wins in a single season. Tampa Bay has 61 wins and is within one win away from tying the Detroit Red Wings record of 62 wins back in 1996. Forward Nikita Kucherov is one point away from tying Alexander Mogilny record of most points in a single season. Kucherov has 126, while Mogilny has 127–the most by a Russian-born player. Kucherov leads the team in points (126) and in assists (86).  Fellow teammate Steven Stamkos leads the team with 44 goals.

Kucherov leads the league in both points and assists; Stamkos is second in the league with 19 powerplay goals and has 16 points in his last nine games.  The Lightning have a regular season record of 61-16-4 while the Bruins are 49-23-9.

The Bruins rested many players on Thursday, but some could return today. Defenseman Kevan Miller sustained a lower-body injury on Thursday but is expected to play this afternoon. Expect goaltender Tuukka Rask in net today and for the Lightning expect Andrei Vasilevskiy in between the pipes. Chris Wagner is still nursing a lower-body injury, John Moore has an upper-body injury and Sean Kuraly is still recovering from hand surgery. For Tampa Bay, Dan Girardi, Victor Hedman, and goalie Louis Domingue are all nursing injuries.

Here are the Projected lineups:

WHEN TO WATCH: Today with puck drop at 1:00 PM, TD Garden

WHERE TO WATCH: NESN, SUN