I mean, of course this was going to be on the list. We’ve seen really strong, and really weak goaltending from both Tuukka Rask and Frederik Anderson over the past two series. Outside of a softy or two from both guys, the two have been really solid throughout the first six games of this series. Rask has a .921 save percentage with a 2.54 GAA and Anderson has a .925 SV% and a 2.70 GAA. With the potency of both offenses and some questionable defense by both teams, I can’t see this being a 1-0 game. There will be goals, it’s just a matter of who can make the saves when it matters.

Can the Offensive Stars Produce?

The superstars on both sides have been very on and off all series. Austin Matthews has lead the way for Toronto, scoring five goals in the six games (but in all honesty, hasn’t really dominated at any point). The Bruins top defensive pair of Charlie Mcavoy and Zdeno Chara have done an excellent job shutting down the John Tavares and Mitch Marner line, but with all of that talent, how long can that last?

The trio of Patrice Bergeron, Brad Marchand and David Pastrnak have been very streaky throughout the series for the Bruins. We all know how dangerous they can be when they’re on their game (they all absolutely torched the Leafs last series) but something has been off with them this series and for the Bruins sake, that better change. 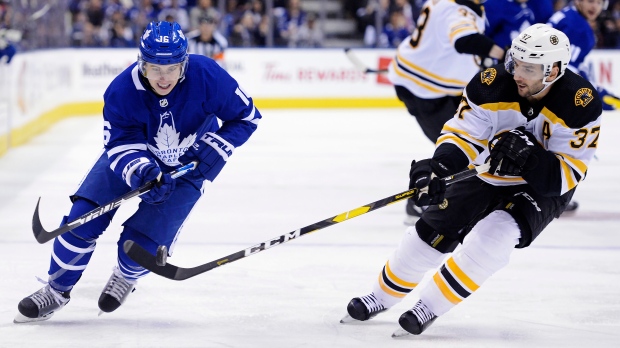 We’ve seen how important special teams have been in this series and throughout the entire playoffs. The Nashville Predators just fell to the Dallas Stars, largely in part to their horrendous powerplay (going 0-15 in the series). Boston and Toronto both have very good powerplays, with Toronto converting on 21.4% of their PP chances and the Bruins scoring on a staggering 43.8% of their chances. There’s no question the game will be a chippy one and I’d assume the referees arms will stay down for most of the game, but when a penalty is called, converting on that opportunity will be huge.

In Game 7 last year, the Bruins hard-nosed forechecking was a big reason why they were able to come back and take the lead late. In the games the Bruins have lost this series, they haven’t been able to maintain consistent pressure in the Leafs zone. The Maple Leafs defense is very susceptible to making mistakes with the puck when pressured so that needs to be the Bruins #1 priority throughout this game.

Forechecking obviously isn’t just a component of the Bruins game, it’s just as important for the Leafs to keep the pressure on the Bs. Putting pressure on smaller guys like Torey Krug and Matt Grzelcyk will be huge for the Maple Leafs, they’re easier to out-muscle compared to the rest of the d-core and getting them to cough up the puck will lead to big-time chances for Toronto. Isolating Zdeno Chara is also just as key, as he certainly doesn’t have the legs to keep up with Toronto’s speedy forwards.

Depth scoring is a key component of every single game and it’s just magnified in the playoffs. Guys like Charlie Coyle and Andreas Johnsson (who both have had very strong series) have key roles with their respective clubs. If the big names aren’t able to step up, look for these middle-six guys to pick up the slack. 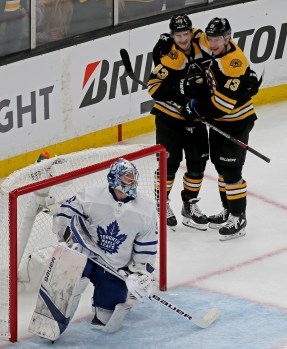 Scoring the first goal is massive, but keeping that lead is even more important. The team that has been ahead going into the third period has won every game this series and with every player fighting for their playoff lives, there’s sure to be a lot of pressure on both sides of the bench. Looking at the history between these two teams, the Maple Leafs have held the lead going in to the 3rd period in the past two game 7s, but have lost both after outstanding comebacks by the Bruins. If the Maple Leafs or the Bruins want to get to the next round, maintaining a lead will be the reason they get there.

Despite having a combined -10 rating in the series, Nikita Zaitzev and Jake Muzzin have done a pretty good job at keeping the Bruins top line in check. Unlike last series, the Bruins top line hasn’t been nearly as good. They haven’t been able to maintain possession of the puck quite as much and their cycling game, which leads to the majority of their chances, is nothing like it has been all season long. If Toronto wants to keep this line at bay, trying to keep this matchup will be their best bet.

As I said before, Mcavoy and Chara have done an excellent job holding Tavares and Marner to minimal offense in this series. With last change and home ice advantage, coach Bruce Cassidy will have to be on his game to keep the matchups in he wants throughout his lineup.

Regardless of the outcome, this should be a great game as it always is. I’ve had Bruins in seven from the start and I’m sticking with that pick. Go Bs.

Black N’ Gold Hockey Podcast #195 9-21-20 Sponsored By BetOnline.AG – Use Code CLNS50 For A 50% Bankroll Welcome Bonus After Your First Deposit