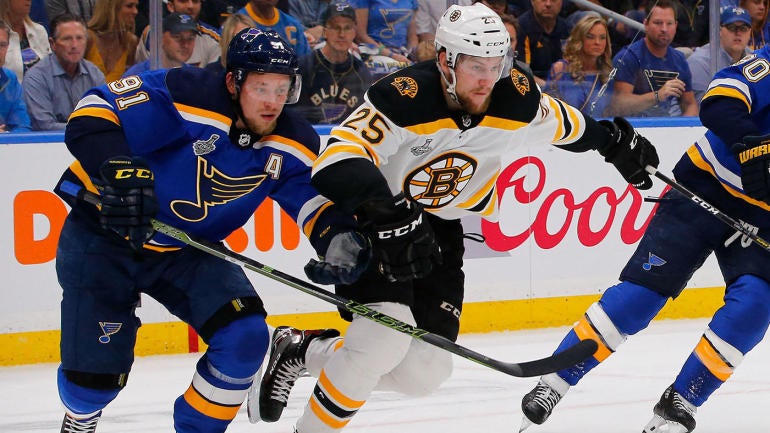 The goal scoring started really early, 43 seconds in off of a wraparound from Ryan O’Reilly. Tuukka Rask made the initial save on a point shot from Vince Dunn, but O’Reilly buried the quick wraparound very shortly after. The Bruins were forced to battle some early momentum from St. Louis from the get-go. Just what the Blues wanted.

The Blues continued to push the pace after scoring the first goal, outshooting the Bruins 7-3 through the first 6:53 and outhitting them 11-5. After that, the Bruins made some headway in terms of creating offense, but struggled with finding puck luck.

That all changed when Charlie Coyle got on the board for the ninth time in the playoffs. Danton Heinen took a hit to make a play and Coyle’s chance initially came off of a Zdeno Chara shot, before potting his own rebound. Chara’s assist was his fourth. It was 1-1 with 6:46 to go, goals in three straight games for Coyle.

Vladimir Tarasenko got lost in coverage and scored to take back the lead for the Blues with 13:14 left in the period. Tarasenko is the last person on the Blues you want to have a golden opportunity to score.

The Blues controlled play for much of the period, and also laid some pretty solid hits, which was a big reason as to why they were succeeding. They were the better team in the first period. Two big advantages for St. Louis in the first came in shots at 13-9 and in hits at 24-16.

Things were fairly standard early until Chara had a Brayden Schenn shot deflect up and off of his face, bloodying the Bruins captain and forcing him to get repairs.

The culprit – deflected puck to the face. pic.twitter.com/OfwylDXmOc

The first penalty of the game came 5:47 into the period when Coyle high-sticked Carl Gunnarsson. The Bruins killed off the penalty without one of their main penalty killers in Chara.

A Bruins power play came shortly after thanks to a delay of game penalty on Colton Parayko. The Bruins had a massive opportunity to tie the game, but they did not convert and the Blues held their one-goal lead.

Connor Clifton went to the box for an illegal check to the head of Tarasenko after a lengthy stint of offensive zone time for St. Louis. But who else but Brandon Carlo to tie the game with a shorthanded goal with 5:41 left? Carlo’s first career Stanley Cup playoff goal was assisted. Patrice Bergeron (8) and Brad Marchand (13) has the assists. The goal made Carlo the 20th Bruin to score a playoff goal this season. That’s a franchise record.

It was not a perfect period for the Bruins, but Carlo’s late shorthanded goal was massive. The Bruins took the hit advantage this time, 13-8, but the Blues held the shot advantage, 12-10. After two, shots were 25-19, hits were 32-29, both in favor of the Blues. Chara did not return to game action after taking a puck up high. The Bruins needed to feed off of the energy from the Carlo goal into the third period.

Good news for the Bruins came in the form of Zdeno Chara’s return, with a fishbowl on his helmet. Bad news came in the form of a Danton Heinen tripping penalty just 2:08 into the period. Rask made a series of huge saves on the penalty kill, helping the Bruins kill it off. Through four and a half minutes and after the Heinen penalty was killed, the Bruins held a 13-3 advantage in blocked shots.

Coyle drew a high sticking penalty with 13:18 remaining to give the Bruins their second power play of the game. Up to this point, Chara remained on the bench for the whole period. Not a whole lot of cohesiveness came on the power play, and as a result, the Bruins failed to score.

Oskar Sundqvist has certainly made some noise in different ways in this series. That’s one way to put it. David Backes decided to flatten him.

O’Reilly added to his monster performance in this game, and he got rewarded for it when he quickly buried a rebound. Poor coverage in front of the net did not help Rask after a tough shot to contain up high and O’Reilly found an open spot in the chaos. Not too long after, Rask made a big stop on Patrick Maroon on a 2-on-1. St. Louis remained ahead by a goal with 8:44 to go. Shots to this point in the period were 9-3 in favor of St. Louis.

Things were pretty bad for the Bruins for the remainder of the third. Not a lot of cohesiveness and a bad turnover by Clifton that led to Schenn’s empty-net goal. The Schenn goal came with 1:29, 4-2 St. Louis. With 25.7 seconds remaining, Alex Pietrangelo and Torey Krug went off following a scrum. Another scrum happened at the buzzer. Chara went the whole third period without a shift, he was there to rally his troops.

Next up is game five in Boston on Thursday at 8 PM ET. The shots were 13-4 in favor of St. Louis and the hits were even at 12. ST. Louis clawed their way back into the series with force. A pivotal game five awaits.