By: Lucas Pearson  |  Follow Me On Twitter @lucaspearson_
Break up day happens every single year, but this one obviously hurt more than the rest. You could tell that every guy in the room went through a ton throughout the entire year, here’s what we’ve learned so far.

This news doesn’t come as much of a surprise, but Chara confirmed that he had multiple fractures to his jaw, and his expected recovery is 5-6 weeks.

It seems like we’ve been waiting forever to hear some sort of update on Miller’s injury, but it’s been confirmed that he broke his kneecap vertically in a regular season game against the Wild in April. He was reportedly close to returning in the Carolina Hurricanes series, but re-fractured it while rehabbing, capping off an absolutely brutal year for the defenseman. 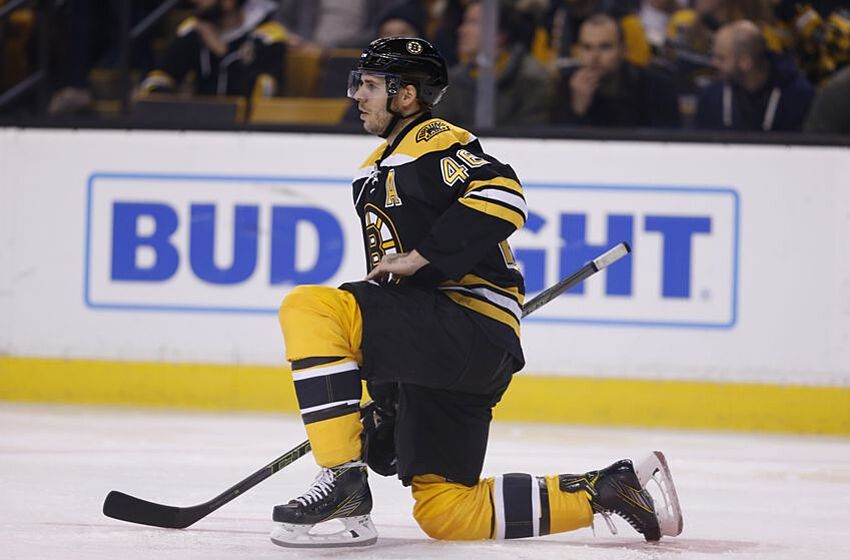 No injury news or anything like that, but it’s worth noting that in an interview Krejci said that he hoped that there weren’t going to be many changes to the roster this offseason, “we are very tight, very close.”

He didn’t say much about the topic, but it was clear that when Nazem Kadri cheap-shot Debrusk, it (likely a concussion) had lasting effects on him throughout the playoffs.

It was pretty obvious that something was up with Marchand in the playoffs, he revealed that he was dealing with a sprained hand (that he re-aggravated during their scrimmage), a strained groin and abdominal injuries.

Bergeron dealt with a groin injury throughout the playoffs but won’t need surgery.

Pasta said that he re-aggravated his thumb during the Columbus series.

This one surprised me a bit. Moore was hit from behind during a game in Tampa, and it blew out his shoulder and broke his humerus and could be out for four to six months. “I could barely hold a stick with two hands.”

Finally, some good news, when asked about his future with the team he said, “I don’t want to go anywhere. This is the best place on Earth. This has become home for me. I want to be here forever.” Hopefully, this bodes well in contract negotiations.

Some more good news. Johansson continued to say that he loved his time in Boston and is very eager to hear what the Bruins have to offer, “hopefully they can work something out.”

The 4th liner played with a fractured sternum and also injured his foot while blocking a shot in game seven against St. Louis that will need to be evaluated.

The upcoming UFA noted that he wants to stay but realizes that the defense is “a bit of a logjam.”

Backes was very vague when talking to the media and knows that there is a lot of uncertainty about his future, but reiterated that he wanted to stay in Boston.

David Backes on when he’ll get some clarity about his situation in Boston:

“I don’t know what that time schedule looks like. …. Obviously, if I’m going somewhere else — which I hope to not be. This is a hell of group in here.” pic.twitter.com/xSwO5mReFo

One of the biggest question marks of this offseason is “definitely very aware of the situations and scenarios that can play out” but also “wants to be here forever.”

#NHLBruins #HockeyTwitter #Boston #BruinsFam B’s fall to the Capitals 3-2 in OT! The Capitals lead the Series 1-0 with Game 2 set for Monday Night in Washington!

#NHLBruins #HockeyTwitter #Boston #BruinsFam SOG in the 3rd Period: WSH-9 BOS-8. Total SOG in Regulation: WSH-31 BOS-24. The game is still tied 2-2 and game 1 will be settled in Overtime!!