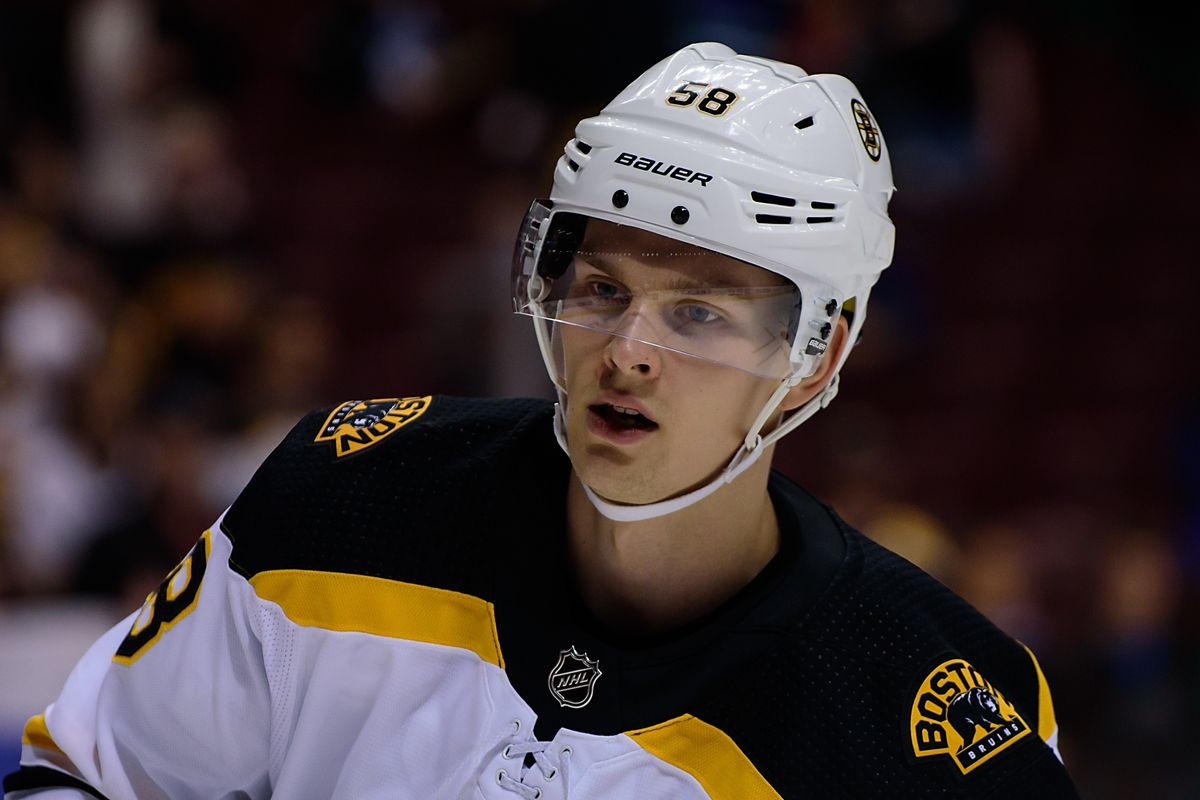 The Bruins’ prospect core is looking pretty solid after the 2019 NHL Draft. This list includes players on ELC’s, so a player like Cooper Zech will not be included because he is on an AHL contract.

Additionally, I will not include Anders Bjork and Karson Kuhlman on this list as Bjork, despite still being on an ELC, has played 50 NHL games. Karson Kuhlman has pretty safely established himself as an NHL player, in my opinion. With all of that on the table, here are my top-10 Bruins prospects right now.

At number one stands the top defensive prospect in the system. The 18th overall pick in the 2017 NHL Draft, Urho Vaakanainen absolutely the potential to be a top-pairing NHL defenseman. Currently, the defensive core is crowded, but Vaakanainen will carve out an important defensive role sometime in the near future.

His ability to clean things up in his own zone and dictate the play from the back end through the neutral zone is at a high level. Defensemen who can do that thrive in today’s NHL. Offense isn’t his strongest suit, but his skating and puck-moving abilities allow him to find his teammates with ease for scoring chances. This combination of skills puts him at the top of the Bruins prospect core in my eyes.

Check out this heads up assist by Vaakanainen in the AHL this past January.

Check out last nights first-period powerplay goal from #NHLBruins prospect Peter Cehlarik. This goal on the man advantage at the 9:21 mark was his ninth goal of the season and was assisted by Urho Vaakanainen and Trent Frederic. #BruinsFam #BruinsProspects #aHLBruins pic.twitter.com/50N0zDhUK9

Deciding between Jack Studnicka and John Beecher at number two was tough. But, I gave Studnicka the edge because of what he has proven in the past. Beecher proved himself to be worthy of first-round consideration behind a crop of high-end U.S. NTDP forwards this past season, but I think there is still potential to be unlocked in the future at the University of Michigan.

Studnicka possesses high-end skills in all three zones, especially in the offensive zone. His well-rounded game allowed him to thrive in the OHL with the Oshawa Generals and the Niagara IceDogs. The top-six center potential is definitely there. After lighting it up in Juniors, his sights are now set on an NHL roster spot.

Oh yeah, and he has some sick hands and finishing ability.

Jack Studnicka (#NHLBruins prospect) with one of the best rushes I've seen. Toe drag around one defender, through the legs of another, and then a backhander off both posts and out. The no-goal of the year. pic.twitter.com/xJJBB1ayU8

John Beecher has a great blend of size and speed down as a centerman. Here’s an example from yesterday at the World Junior Summer Showcase.

We've seen this a few times!@JohnWbeecher put USA Blue up by two with this slick breakaway tally against Sweden at the #WJSS 🚨 pic.twitter.com/B69TJrVnP2

That combination of size and speed gives him the potential to be a deadly second-line center down the road. Said combination also makes him a menace for defenders to contain. His time at the University of Michigan in the future will only do good things for his game and makes him a very intriguing prospect.

When I see Jakub Lauko, I think of Brad Marchand. They both possess high-end offensive ability as left-wingers and plenty of nastiness in their game. Lauko plays a high-energy style and has excellent puck skills. He absolutely has top-six forward upside. When he was drafted, he said he wanted to prove he was the steal of the 2018 draft at 77th overall. He’s also not afraid to show off his personality.

He was a true impact player for Rouyn-Noranda in their Memorial Cup Championship run this past season.

Axel Andersson is a right-handed defenseman with a powerful skating stride and solid puck skills, qualifying himself as another defenseman that really fits the mold of today’s premier NHL defenseman. He still needs some time to develop, but he projects as a top-4 defenseman. Here’s a glimpse of what he can make happen with those puck skills.

Axel Andersson is electric, the crowd can hardly contain themselves pic.twitter.com/fQ1dVZusnF

Everything Oskar Steen does, he does with blazing speed. He’s a very quick skater, smooth puck handler, and has an NHL shot already. His smaller frame doesn’t phase him when it comes to getting in the corners. He’s just a tough player to contain, and he’ll fight for a roster spot with the Bruins this season.

Below you’ll see Steen make a great read on a loose puck and show off that NHL shot he already possesses.

Jeremy Lauzon gave us a quick glimpse at what he can do in a short, 16-game NHL stint this past season. He moves the puck effectively, is stout defensively, and can hold his own in the offensive zone. While the Bruins defensive core is fairly crowded at the moment, Lauzon still holds the potential to be a second or third pairing NHL defenseman.

Below you’ll find a clip of an electric goal Lauzon scored for Team Canada in the 2017 World Junior Championships.

The first goalie on the list is Jeremy Swayman of the University of Maine. What sticks out with Swayman is his athleticism and quickness. His movement in the crease is very smooth and allows him to make tough saves. Of the Bruins’ goalie prospects, he possesses the highest NHL upside in my eyes.

Below you’ll find a glimpse of that high-end athleticism and quickness on display against Quinnipiac from 2017.

Zachary Senyshyn is another player who will fight for an NHL roster spot this season. He has a past history of being a pure goal scorer in part thanks to his excellent shooting ability. Don’t let the fact that he hasn’t lit up the score sheet in the AHL take away from his potential to be a legitimate goal scorer.

Check out Saturday's goal against the Bridgeport Sound Tigers from #NHLBruins prospect and #AHLBruins forward Zach Senyshyn. The timing and vision of veteran defenseman Kyle Cumiskey to get the stretch pass to the young forward for his 12th of the season was poetry in motion. pic.twitter.com/QLF2Mxv85Q

Kyle Keyser also possesses some great athleticism and quickness in the crease and rounds out the top-10. He was acquired as a diamond in the rough undrafted free agent signing and is now set to spend this season with the Providence Bruins and possibly the Atlanta Gladiators.

He has a thing for sprawling saves.

#Gens "Save Of The Year" candidate 1: Kyle Keyser, Nov 18 vs Niagara pic.twitter.com/BjkWJmzLLP

The Bruins prospect core is doing just fine, which is nice reassurance to have with an already proven cup contending team.