Training camp is right around the corner, and the Bruins are almost back. From David Pastrnak to Brandon Carlo, it seems almost every year a player “breaks out” and really exceeds expectations. Here’s six who I think have a good shot and having big years for the black and gold.

In his rookie season, Jake Debrusk tallied 43 points in 70 games, good for 8th in point-per-game out of all rookies. He added to those numbers by notching six goals and eight points in an excellent playoff showing. In just his second NHL season, Debrusk was able to light the lamp 27 times in only 68 games. After two solid seasons mixed with equally solid playoff runs, Jake Debrusk seems poised to take the next step in his NHL career and really have a big year. All of that may depend on who plays to the right of David Krejci. If Debrusk, Krejci and one of David Pastrnak (who would be my choice to play with the two) Charlie Coyle, Danton Heinen or an unmentioned winger can develop some good chemistry, a 30 goal, 60 point campaign is not out of the question.

It baffles me how many people dislike Danton Heinen. He began his tenure with the Bruins with a great rookie season where he notched 16 goals and 47 points to go with a +10 rating in 77 games (outscoring the aforementioned Jake Debrusk).  The following year did not begin the way Heinen would have liked, in his first 40 games he reached the back of the net just four times and added six assists but the second half of his year was a different story. The 24-year-old was able to score seven goals and 24 points in his final 37 games and was apart of arguably the Bruins best line in the playoffs with Charlie Coyle and Marcus Johansson. He’s one of the best defensive forwards on the Bruins and constantly does the little things right, and I really think this is the year that things will start to go his way.

Probably the most well-known talent out of all forwards in the Bruins’ farm system, Jack Studnicka has all the tools to become a really good player in the NHL. I praised him in my “Top-10 Bruins Prospects” piece, and after an outstanding year in the OHL and strong play in the World Juniors for Team Canada, Studnicka seems to be a strong contender to make the big club this season.

If he’s able to crack the roster, I’d love to see him (and the two players you will see below) play alongside Patrice Bergeron and Brad Marchand. We’ve seen what that duo has done for players like David Pastrnak, a struggling Danton Heinen and others in the past. If Studnicka is able to make the big club and have a role on the team, a 40 point season is certainly obtainable. 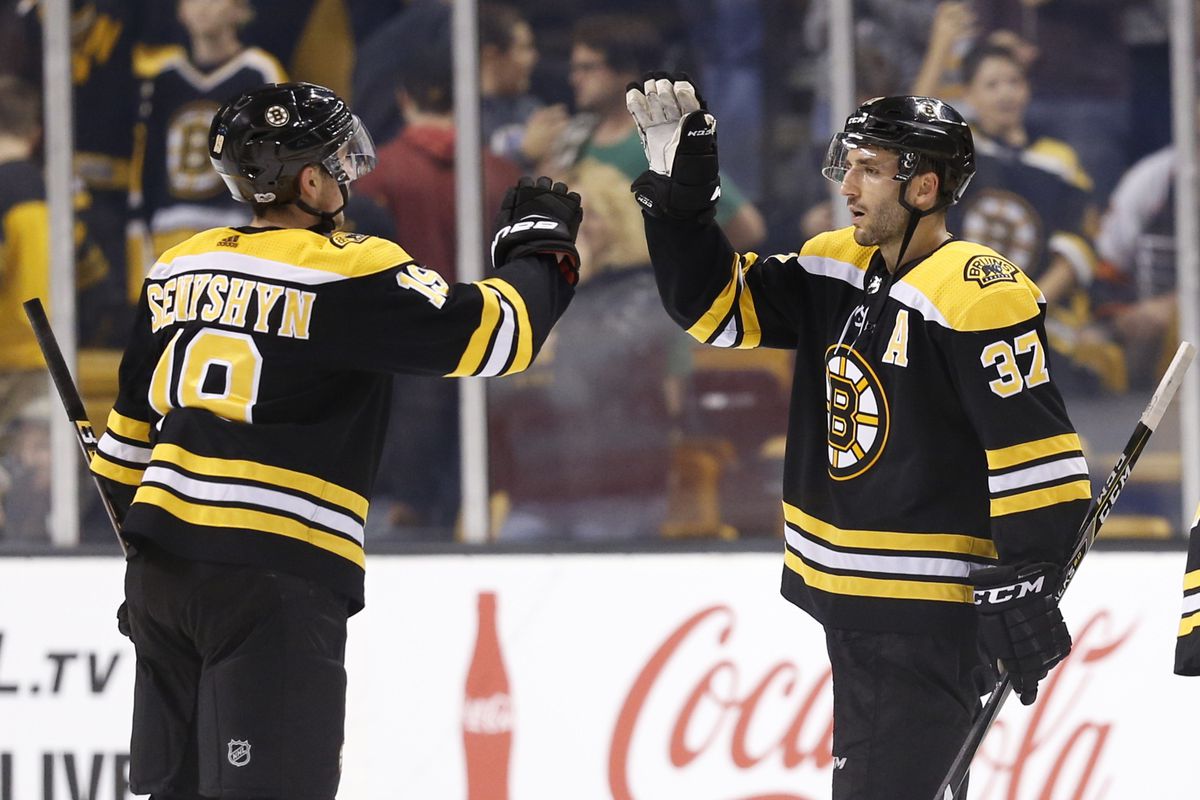 This coming season will be Senyshyn’s first season with a legitimate chance to make the Bruins roster. The 6’1 winger hasn’t blown anyone away in his two years in Providence, but as a two-time 40 goal scorer in the OHL, the skill is certainly there. We saw a glimpse of what Senyshyn could do at the tail-end of the season, and he didn’t look out of place at all and was able to light the lamp once (albeit an empty netter, but still good to see). Just like Studnicka, a stint on the top line could be huge for Senyshyn, and a big right-shot winger could prove to fit very well.

Anders Bjork has had a tough go in his first two years playing pro hockey. After bouncing back and forth between the NHL and AHL, Bjork’s past two years have been unfortunately cut short due to shoulder injuries. If we’re able to see a healthy Anders Bjork in the NHL this year, I expect big things. The former Notre Dame star is arguably the most talented player in the Bruins’ system and has the speed to make it in today’s NHL. While he struggled in the NHL last season, totaling just three points in 20 games, he had quite a bit of success playing with the top line the season before which is where he should be playing if he’s able to edge out the previous two players and make the roster I see big things for this year.

Matt Grzelcyk isn’t on this list because I think he’s going to turn into the next Torey Krug and put up a 60 point season. He’s on this list because this year is the perfect year to give Gryz a bigger role on the team. It seems the big man Zdeno Chara is nearing the very end of his career and we’ve seen that his age is starting to catch up with him. This past season, the Charlestown native developed into the Bruins’ best 5v5 defenseman and really showed he was ready for more than a bottom-pairing role. If coach Bruce Cassidy is able to rotate the duo of Chara and Grzelcyk with Charlie Mcavoy, Gryz should have his best, and most impactful season yet.

Check out the Black N’ Gold Hockey Podcast episode 142 that we recorded on 8-25-19 below! You can find our show on many worldwide platforms such as Apple Podcasts, Google Podcasts, iHeart Radio, Spotify, SoundCloud, and Stitcher.