The Boston Bruins continue their road trip when they face the Vegas Golden Knights tonight at the T-Mobile Arena. Both teams are off to a hot start with each posting a 2-0 record thus far early in the season.  Offensively, the Bruins team will be looking to dust off the cobwebs as they’ve had to relay mainly on the back end. Both goaltenders have been outstanding in helping the Bruins stay afloat in these past two games. Tonight’s game will  hopefully be the beginning of the team getting over some bad habits:

“…I don’t think we’re  playing the way we need to right now to score, not generating enough, lets start with that. We’re not playing off an original shot, we’re trying to make plays through sticks that  maybe aren’t there…It’s a lot to do with how you play in August. It’s not really live, you’re always trying to make that nice play instead of maybe a play that will generate a loose puck situation and if you go.” 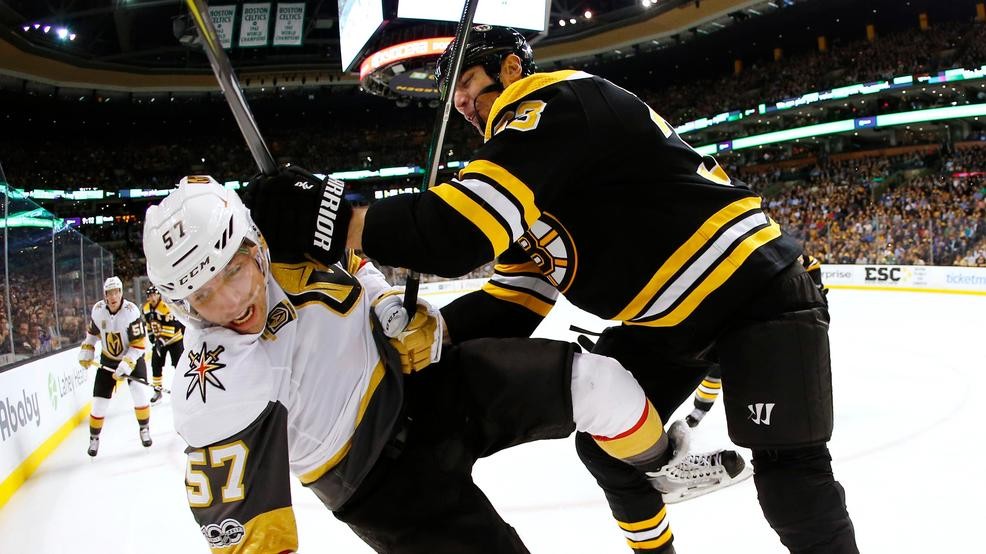 Boston has allowed only one goal so far with both Tuukka Rask and Jaroslav Halak minding the net. Halak had a shutout the other night against the Arizona Coyotes while Rask made 28 saves against the Dallas Stars. Rask (0.966 save percentage) will get the start in net for the Bruins.

Cassidy offered an update on Joakim Nordstrom and reported that he had been medically cleared but will not participate in tonight’s game. There may be a chance forward David Backes will see some ice time tonight. Recently the Bruins opted to have Par Lindhom on the fourth line in the game against Arizona.

Nordstrom is inching closer to returning to the lineup and has traveled with the team. The 27-year-old winger has been practicing and will need a few more before getting back on the ice.  Coach Cassidy explained that with Nordstrom  “there’s a little bit of rust:”

“What we want to be careful of is the guys that didn’t practice a lot, we threw them right in…He  (Nordstrom) didn’t play any exhibitions games. We’re gonna try to approach that one differently…His target date now becomes Thursday.”

For Vegas, expect Marc-Andre Fleury, who currently has a 0.965 Save Percentage,  in net tonight when they face the Bruins. The Knights are coming off to a great start; so far Vegas have tallied up three short-handed goals in two games. 32-year-old right winger Ryan Reeves leads the NHL with 14 hits in two games with Fleury stopping 55 of 57 shots on goal.

Tomas Nosek posted three points in the teams recent 5-1 victory over the San Jose Sharks. In his 800th career NHL game, Fleury made 34 stops. Defenseman Nate Schmidt continues to be monitored and will be out week-to week with a lower-body injury.

This will be the first meeting for Vegas against an Eastern Conference team as they look to continue their momentum. Here are the projected lineups for tonight:

WHERE TO WATCH: ESPN+, ATTSN-RM, NESN