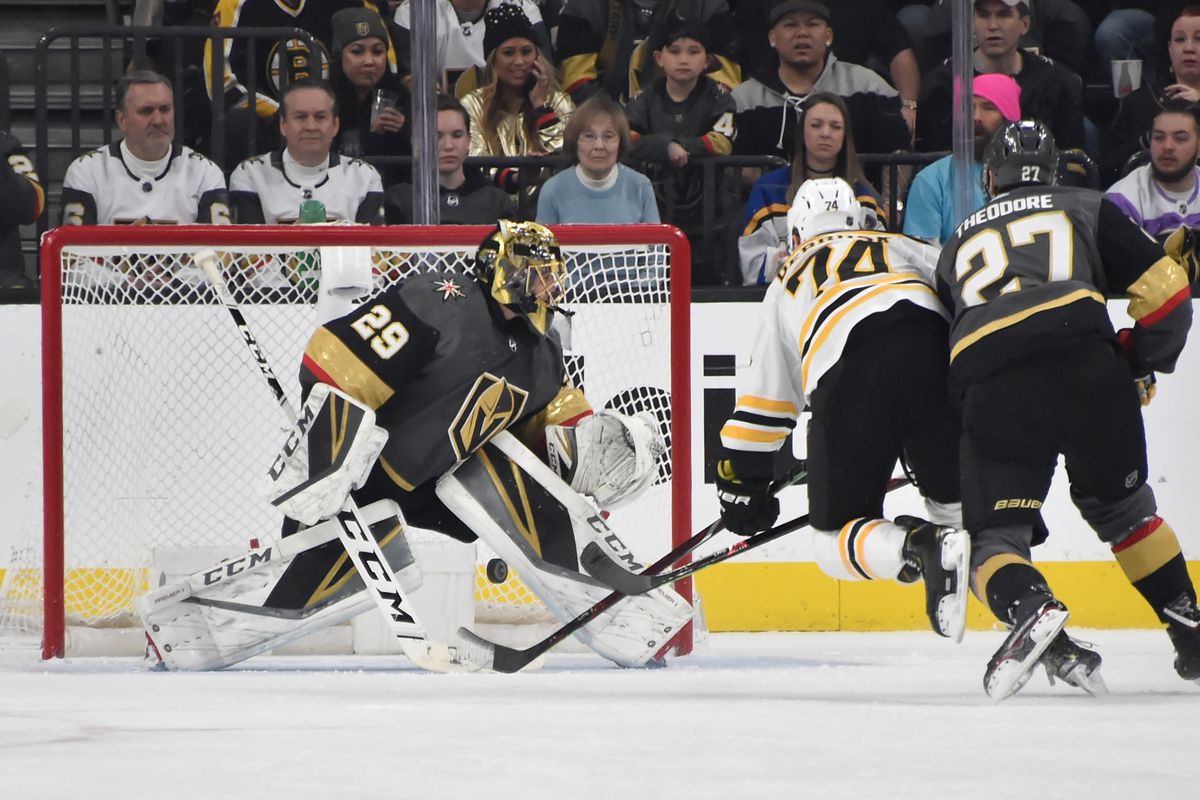 Two unbeaten teams that are set to be contenders in their respective conferences this year went at it in Vegas for the first time this year. The Bruins were 3-1-0 against the Golden Knights in their four career matchups against one another coming into this one. But, this marked Tuukka Rask’s first bout with the Golden Knights of his career. This game put Zdeno Chara in 23rd place all-time in games played (1,488), now ahead of Wayne Gretzky.

The game started off fast as David Pastrnak ripped a backhander with speed towards the net right off the bat. Brad Marchand talked about wanting his line to keep trending upwards, chances like that could do it. Brett Ritchie followed it up a couple shifts later with a backhand chance of his own. Some good offensive pace to start for the Bruins, with other chances to boot.

What ended up becoming some really solid back-and-forth was halted by a goaltender interference penalty on Ritchie just 5:15 into the period. The momentum that the Golden Knights established early on in the power play lead to a power-play goal for a wide-open Mark Stone, putting the Bruins down by one 6:36 into the first period. The first time the Bruins trailed in the 2019-2020 season.

It didn’t stop there for the Golden Knights, as former Bruin Reilly Smith broke free and buried a cross-crease pass to make it 2-0 with 8:20 into the period. After a solid first five minutes or so for the Bruins, the game started to slip away quickly.

They didn’t let it bother them too much, as David Pastrnak got the Bruins on the board. Pastrnak’s first of the season was assisted by Patrice Bergeron’s steal and a cross-crease pass from Brad Marchand 11:21 into the period.

More good fortune came the Bruins’ way with 2:22 to go in the period thanks to a Brandon Pirri slashing penalty. A wide-open net right off the bat couldn’t be capitalized on, but the top power-play unit was buzzing to start. The rabid offensive pressure paid off when Marchand buried a one-timer to tie the game. The tying goal, Marchand’s first of the season, was assisted by David Pastrnak and Torey Krug.

The final shots were 12-11 in favor of the Golden Knights in the most electric period of the Bruins season so far. Marchand wanted the line to continue to trend upwards, and that they did in the first period. The top line sprung a much-needed turnaround after being down by two early on.

You thought the top line was done? Nope. Brad Marchand buried his second of the game and third of the season on a partial break high over the glove of Fleury. Pastrnak’s second assist of the game came off of a crafty indirect pass, making it 3-2 Bruins just 33 seconds into the period.

To make it two goals in 54 seconds, Krug sent a shot on net that deflected off of Ryan Reaves’ stick and in. Brandon Carlo and Sean Kuraly had the assists. Things were changing very rapidly, as Krug’s goal marked the fourth unanswered goal for the Bruins.

David Backes then went to the penalty box for retaliation shortly after Krug’s goal. Luckily, the Bruins restored normalcy and killed the penalty.

Even though the frantic goal-scoring took a break, the Bruins dominated the majority of the flow of play in the second period. One huge chance for the Golden Knights came when Jonathan Marchessault split the defense and got in Rask’s grill, but Rask made the stop. The Bruins played some of their best hockey of the season.

Things got crazy again when it looked like Max Pacioretty scored within the final three minutes of the period. It actually hit the post and didn’t actually cross the goal line. Potential crisis averted. The shots in the second were 15-12 in favor of the Golden Knights, but the Bruins had the lead.

Two minutes into the period, Nicolas Hague went to the box for two minutes for hooking. Despite not scoring on the power play, the Bruins continued to create havoc in the offensive zone consistently.

Through the first nine minutes of the period, the shots were 7-0 Bruins, then Brayden McNabb took a holding penalty. Vegas’ first shot didn’t come until 11:32 into the period. The game shifted back in Vegas’ favor after Pacioretty scored on the power play following a Marchand cross-checking penalty, making it 4-3 late.

Gerard Gallant eventually pulled Fleury within the final two minutes. For the first time since 2002, the Bruins start the season 3-0. 82-0 is still intact. Rask made 31 saves, but unfortunately was hurt at the end of the game and had to be carried off the ice. The Bruins had 35 shots, and the Bruins staved off a tense final three or so minutes to this game. Next up are the Colorado Avalanche on the road at 9:00 PM on Thursday.

Check out the new Black N’ Gold Hockey Podcast episode 148 that we recorded on 10-6-19 below! You can find our show on many worldwide platforms such as Apple Podcasts, Google Podcasts, iHeart Radio, Spotify, SoundCloud, and Stitcher.