It was announced that this coming Saturday, October 26th former Boston Bruins players will participate in the inaugural “Face-Off For Heroes” Alumni Classic match-up, where they will face the New York Rangers alumni. The event will take place at the Bentley Arena in Waltham, MA at 1:00 PM

Video: Frank Simonetti discusses the Warrior for Life Fund and this Saturday's @NHLBruinsAlumni vs @NYRangers Alumni game at @bentleyu https://t.co/qnCJ5I1wFf 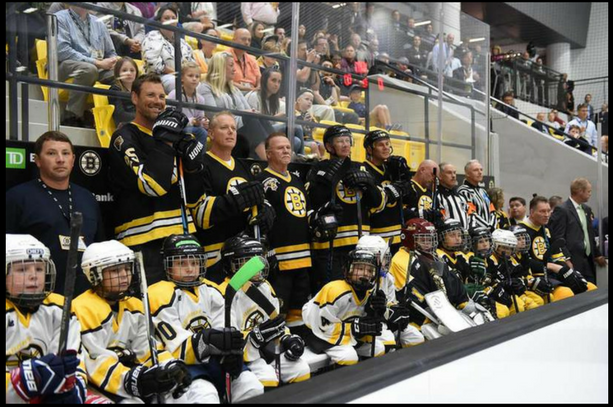 Benefits will go the Boston Bruins Foundation, the Navy SEAL Foundation and the Warrior for Life Fund. The Life Fund helps military families of every branch that have to deal with hardships of the effects of war along with helping those coping with challenges with disabilities, combat and extended deployment overseas through hockey.

They’re a sponsor of the Navy SEAL Foundation and support all active duty, retired veterans along with their families. Programs offered aim to provide both venues and infrastructure towards service members and families long-term.

The Fund was originally founded as the Virginia Beach Hockey Club (VBHC) Challenge team in 2012. Its main focus was providing the Hampton Roads military community a place to develop a positive team atmosphere to those that wanted to learn how to play hockey.  One of the other aspects of the VBHC is “promoting camaraderie, competition, and athleticism to those with and without disabilities. The only requirement was a strong work ethic, dedication, and a positive attitude.”

The brothers Mullen — Joey and Brian — will be among the many NHL legends at the "Alumni Classic-Face Off for Heroes" hockey game between the Bruins & New York Rangers Alumni on Saturday, Oct. 26 at Bentley Arena in Waltham, MA. @BrianMullenNYR
Tickets: https://t.co/NE7NYLfX8k pic.twitter.com/7nBAPHn95Q

The game itself will have three running time periods and have three-minute intermission in between. The 1st period will be 20 minutes, while both the  2nd and 3rd will be 15 minutes.  Boston Bruins own official anthem singer Todd Angilly will sing prior to the game.

Anyone looking to purchase tickets may do so through the Warrior Fund Website by clicking here. If you’re in the military or first responder, tickets are free. There will also be a raffle that the  NHL Alumni & Boston Bruins Foundation will run. A winner will be picked and they’ll have the opportunity to win some great prizes: a chance to outfit a youth, high school or prep school team of their choice with new CCM hockey equipment and win 4 Suite tickets to a Boston Bruins Game. The game will take place on November 5th in Montreal at the Bell Center and the winner will have a chance to tour the Center.

Raffle Tickets can be purchased directly by clicking here.

The Boston Bruins Alumni is “a non-profit organization made up of past players of the Boston Bruins.  The Alumni actively coordinates Benefit Hockey Games to raise money for various charities and youth groups.  You can check out their schedule for upcoming games.