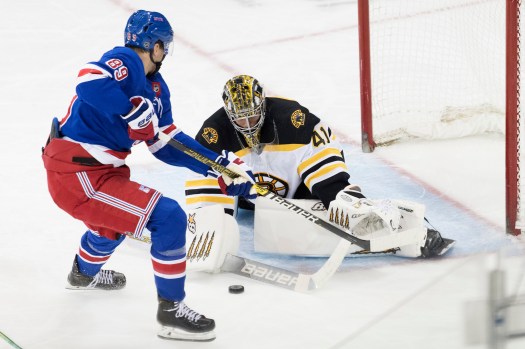 It was a Sunday night match-up between two Original-Six teams and each was coming into tonight’s game on a high note, as both the Rangers and Bruins won their last games.  However, it would be Boston who would come out the victor as they defeated New York on their home ice.

With the puck drop at Madison Square Garden, the Bruins would start the first period on a power-play after Patrice Bergeron was tripped by Rangers Brady Skjei.  As both teams continued their physical play and Boston having missed chances on Rangers netminder Henrik Lundqvist, it would be New York that would strike first. In what would be Mike Haley’s first career goal with the Rangers, he would get a backhand off a rebound at 10:19 to give the Blueshirts a 1-0 lead.

After a tough collision with Boston’s Patrice Bergeron, Rangers center Mika Zibanejad suffered an upper-body injury and did not return for the remainder of the game. Eleven seconds into the second period, Patrice Bergeron would grab the rebound after David Pastrnak was tripped into Lundqvist.

With the puck loose in the crease, Bergeron would tap one in net. Amid the confusion, the goal would be upheld as officials reviewed the play. With the ruling on the ice standing, Boston would be tied at 1-1 and the game would subsequently shift into the Bruins’ favor.

In what would prove to be a frustrating second period for the Rangers,   Brad Marchand would find enough space to squeeze in a backhander past Lundqvist, giving the Bruins a 2-1 lead at 1:08 in the second.  Playing with speed around the net, Bruins’ Charlie McAvoy would send a feed to Charlie Coyle who nailed a quick wrist shot in the Rangers’ net. With seven minutes left in the period, Marchand would snipe a wrist shot on the glove side of Lundqvist, making the score 4-1.

Goaltender Alexander Georgiev would take over Lundqvist in net for the Rangers at the start of the third period. Bruins’ Par Lindholm did not return to the game. In the first few moments in the third, Captain Zdeno Chara would send a rocket past Georgiev, making the score 5-1.

As both teams traded hits and giveaways, New York would battle back and with a beautiful set-up by Artemis Panarin, the Rangers would get on board as Pavel Buchnevich tucked one by Halak.

Boston would strike again as Bergeron sent one in net after a feed from linemate Brad Marchand, making the score 6-2. With the Bruins once again on the penalty kill, the Rangers’ Chris Kreider would find the loose puck to send it past Halak.

Seconds later and with a little over a minute left, Brady Skjei would find the rebound, sending a quick shot in the Bruins net. With 44.7 seconds left in the third, Patrice Bergeron would nail his third of the night.

Boston went 0-2 on the power-play and New York went 1-5 on the power-play. Lundqvist made 27 saves on 31 shots before being pulled at the end of the second.  Alexander Georgiev made nine saves on 11 shots. Bruins Jaroslav Halak made 25 saves on 29 shots and is now 3-1 in five games played.

With Bergeron’s hat-trick, the top line had 13 points combined: Marchand had two goals with three assists. Pastrnak had five assists and continued his game point-streak.

The Bruins are now 8-1-2 and have won three straight games. New York is 3-5-1 and is seventh in the Metro Division. Boston is currently second in the Atlantic Division.

Bergy with the hat trick, while Marchy and Pasta pick up five points each. pic.twitter.com/JS0CcDetbL