By: Liz Rizzo | Follow me on Twitter @pastagrl88
In their second game of a back-to-back, the Boston Bruins flew back home late last night as they ready themselves to face one of the league’s best teams. After snapping a four-game losing slump, the B’s are gearing up for a tough match-up when they play the Washington Capitals at the TD Garden.
Call it what you may, the Caps have been the Bruins kryptonite for a while now with Boston finally slaying that dragon when they narrowly defeated them 1-0 this past February. In the last 20 games played between these two teams,  the Bruins have only won four games. Today’s match-up will undoubtedly be a test for both teams as they each look to place another “W” in the win column.

Washington will be traveling to Boston after losing to the Montreal Canadiens last night at home 5-2. Prior to the game, the Capitals had a 13-game point streak and much like the Bruins will be looking to start a fresh new one tonight. The loss against Montreal was the team’s first in regulation in over a month (their last loss was to the Colorado Avalanche on October 14th).  They are 7-1-1 when facing an Eastern Conference opponent this season so far.
After a scoreless first period, the Canadiens got on board, blanking out the Caps 4-0 at the end of the second period. Washington came up short on their comeback as they netted two goals in the third but never fully recovered. The Caps are now 11-1-2 in their past 14 games played. 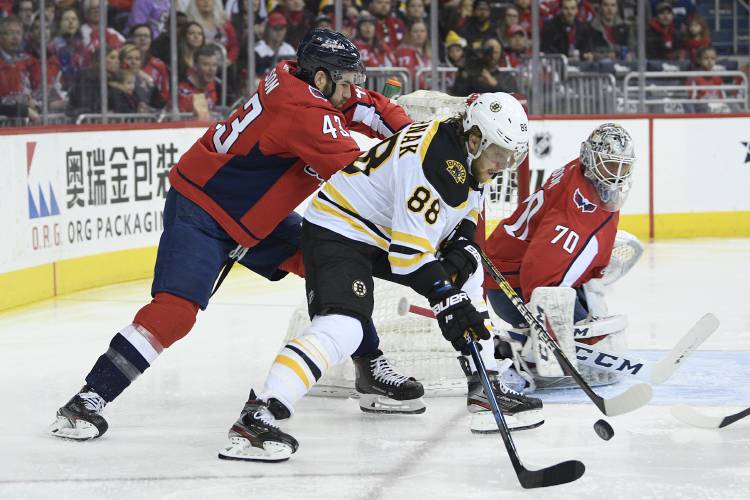 Despite the four-game losing streak that halted a 10-game point streak for the Bruins, the team is currently the only one in the NHL that has not lost in regulation at home.  After getting the B’s onboard last night against the Toronto Maple Leafs,  forward Charlie Coyle has four points with one goal and three assists. Brad Marchand had quite the night in his 700th NHL career game as he notched two goals, which were the difference makers in a much-needed win for the team.

.@Bmarch63 reacts after potting two third-period goals during the #NHLBruins 4-2 victory over Toronto in his 700th career game: pic.twitter.com/asYqHzOowF

The Bruins and the Capitals lead their respective Divisions with Washington having played two more games than Boston. With the loss, the Capitals are now 14-3-4 in 21 games while the Bruins are 12-3-4 in 19 games. Marchand is on pace to break his previous 100-point season. He has now leapfrogged over teammate David Pastrnak in the NHL leader-board with 32 points (third in the league).  Pastrnak still leads the league with 16 goals.
Marchand is fourth in the league with 19 assists; Zdeno Chara is tied for second in the league in plus-minus at 13. Washington goaltender Braden Holtby is tied for second in the league for wins (nine), while Tuukka Rask is tied for ninth with eight wins. John Carlson leads the Capitals team with 31 points and 23 assists. Alex Ovechkin leads with 14 goals.
In the last five games, John Carlson has notched eight points with seven assists. Center Evgeny Kuznetsov has four goals. For the Bruins’ last five games, David Krejci has five points and four assists while Marchand has three goals. Expect Tuukka Rask (8-2-2) in net for the Bruins. The 32-year-old goaltender now has a 2.14 goals-against-average with a .927 save percentage. For Washington, expect Brayden Holtby (9-1-3) in net.  The 30-year-old now has a 3.06 goals-against-average with a .903 save percentage.
There was no morning skate for the Boston Bruins. Here are tonight’s projected lineups:

WHEN TO WATCH: Tonight with puck drop at 7:00PM
WHERE TO WATCH: NESN, ESPN+

Via @BlackNGoldPod writer Max Mainville.
Give Max a follow @tkdmaxbjj