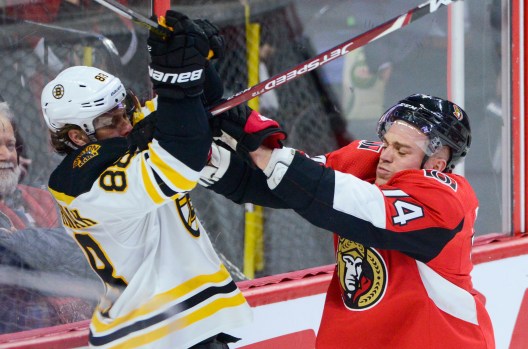 In the second game of a back-to-back, the Boston Bruins finished their trip up north on a positive note. After Wednesday’s throttle win over the Montreal Canadiens, Boston was going for broke and have now won five in a row. Despite the slow start, turn-overs, and giveaways (on both ends), the team managed to win from behind if not for the stellar performance of Tuukka Rask.

Boston would come out in the first looking a bit tired and slow on their legs while Ottawa had more bite to their game.  At times, the Bruins team found themselves chasing the puck and were unable to clear their own zone. In an effort to get things going, Coach Bruce Cassidy juggled the lines around. While the team looked to get their game going, Tuukka Rask made the saves that kept the score 0-0 through two periods.

The Bruins looked more cohesive in the second with multiple chances to score, however, they could not manage to get the puck past Ottawa’s Anders Nilsson. Boston had been outshot 10 to 24 by the end of the second.  Both Ottawa and Boston went 0-2 on the power-play tonight.

With the third period underway, the Senators Tomas Chabot would score off a wrist-shot 41 seconds into the period, getting Ottawa on board.  Minutes later, Bruins’ Brad Marchand would get Boston on board at 05:15 with his fifth goal in four games. He would score his 18th goal of the season off a pass from Anders Bjork as he slipped one between  Nilson’s pads.

We're running out of words to describe this guy 🔥@Bmarch63 | #NHLBruins pic.twitter.com/0dnKoEuDAn

With the game tied at 1-1, momentum would shift in Boston’s favor. At 08:45 in the third,  Bruins Captain Zdeno Chara would score his fifth goal of the season with a hard slap shot from a pass by Brendan Gaunce. The 25-year-old Gaunce (making his Bruins debut) would make the play in the slot to feed the pass to Chara, who would score the game-winning goal.

Ottawa had several close chances to score but Boston’s Rask denied their efforts. The Senators were unable to capitalize early on while on the power-play as Boston held on to win 2-1. The boys in  Black and Gold are now 6-0-3 in their last few games and have improved to 17-3-5. Rask made 33 saves on 34 shots to post his fifth straight win of the season. He improves to 12-2-0 this season. Anders Nilsson made 19 saves and the Senators have lost their last two games in regulation for the first time since October.

Connor Clifton had the night off and Steven Kampfer would slide up next to Matt Grzelcyk. Gaunce made his debut on the second line, centering with Jake DeBrusk and Charlie Coyle. News came out from the Boston camp of the multi-year contract extension of Coyle and Chris Wagner.

With the loss, Senators’ goaltender Anders Nilson is now 7-5-1 as he minds the net while Craig Anderson nurses a minor injury sustained during Monday night’s game against the Columbus Blue Jackets.

"It took us a while to sort of get to our game where we could get through there and establish a little something. Eventually we got there, and it took everybody. We found a way to win."

THREE STARS OF THE GAME:

Boston will once again face Ottawa for the third time this season on December 9th with the Bruins leading the series 2-0. The B’s will head back for a game-day matinee at the TD Garden when they face the New York Rangers.

WHERE TO WATCH: NBC