By: Liz Rizzo | Follow me on Twitter @pastagrl88
The Boston Bruins closed out their five-game homestead on a sour note and were handed their first regulation loss at the TD Garden this season.  Boston would face a tough Avalanche team, who are second in the Central Division and unlike Thursday night’s game against the Chicago Blackhawks, the B’s were unable to turn things around.

In the first period, Boston had their legs going, knowing full well Colorado would come out with guns blazing ready to extend their own winning streak. The Bruins are 3-0-1 in their first four games at home this week. Boston had multiple chances on the net with good zone time down Colorado’s end while the Avs had no problem throwing their weight and speed towards the Boston net. At 13:14, Bruins’ Chris Wagner opened up the scoring in the first with a quick tip-in shot past Philip Grubauer.
Colorado would get on board with minutes left in the first period when Valeri Nichushkin scored with a backhand that slipped behind Jaroslav Halak. With what appeared to be some sort of muscle/groin pull, Grubauer would be replaced by Pavel Francouz after gingerly skating off the ice.
With the second-period underway, Boston found themselves spending more time down their own end. The defense started to break down and Colorado’s Ian Cole would slap one past Halak, making the score 2-1. The Bruins would again push towards Colorado’s net, taking advantage of tough turnovers by the Avs. Despite intense pressure from Boston, Colorado’s Pavel Burakovsky would score off a wrist shot, putting the Avalanche up 3-1. 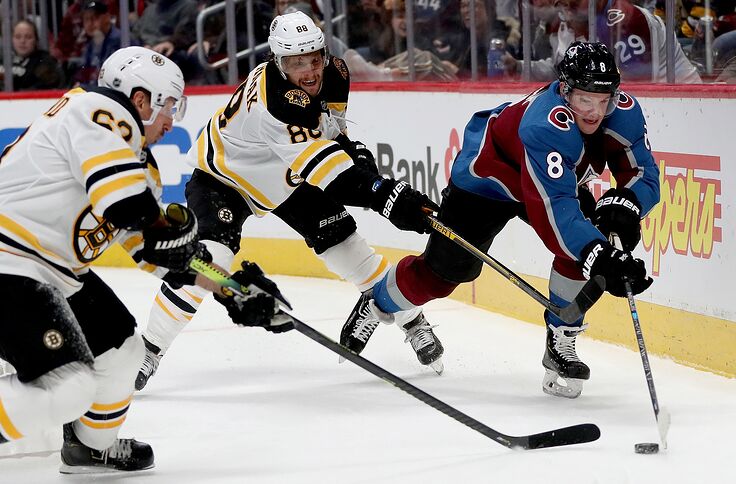 Boston again found itself trailing at the start of the third period. Trying to keep their frustration in check, the Bruins were looking to stage a comeback (much like the recent bout against Chicago).  In a relatively clean game, Boston would draw the first penalty of the night, however, they were unable to capitalize as Brad Marchand would be called on a hooking penalty. With 1:35 left on the Colorado power-play, the Bruins would also go on the power-play on a high-stick to Zdeno Chara.

UNABLE TO CLOSE THE GAP

The third period continued to wind down and with minutes left, the Bruins would bombard the Avs net with a cascade of missed shots.  David Pastrnak would draw a penalty late in the third, giving Boston one last push to staging a miraculous comeback.  On a 6-4 in Boston’s favor, the Bruins were unable to connect. In the last few seconds, the Colorado Avalanche would net an empty-netter, making the final score 4-1.
Shots on goal were even at 20-a-piece and both teams were unable to score on the power-play with the Bruins going 0-for-3 while Colorado went 0-for-1. The Avs continue their win streak this season and completed their season-series sweep against Boston. Colorado previously beat the Bruins 4-2 on October 10th. Boston’s record is now 20-4-6 while the Avalanches are 19-8-2, winning six in a row.
WHAT’S NEXT: The Bruins will face the Ottawa Senators on Monday, November 9th for the first of a four-game road trip.

Check out the new Black N’ Gold Hockey Podcast episode 156 that we recorded below! You can find our show on many worldwide platforms such as Apple Podcasts, Google Podcasts, iHeart Radio, Spotify, SoundCloud, and Stitcher.

Happy Tuesday, @andrewtaverna and I recently started a podcast @pucklinespod lets get the account up to 200 followers by the end of the week! #NHLBruins #Hockeytwitter #Hockeybets

We have been quiet today! Sorry for going MIA, but we were busy giving our YouTube channel a facelift 😉