Just a week or so after receiving the First Star of the Week award, Brad Marchand has added yet another accolade to his already long list. Ten days ago, the American Hockey League announced that the Bruins’ winger was selected as the Ephesus/AHL Graduate of the Month for November.

In the 14 games he played throughout November, Marchand tallied 11 goals and 11 assists, good for 6th in the league within the month. The five players ahead of him? Connor McDavid, Nathan MacKinnon, Patrick Kane, Artemi Panarin and Leon Draisaitl. Of those five players, just Leon Draisaitl had gotten a taste of the AHL, where he played six games in 2015. I was curious and did a little research on what other AHL alumni have had major impacts this season. Maybe it’s not all that surprising, but just four of the top 15 scorers in the NHL have played in the American Hockey League. Those four are Marchand’s teammate David Pastrnak, Capitals defenseman John Carlson, the aforementioned Draisaitl and of course Marchand. The little ball of hate has more games in the AHL than all three combined, lacing them up in the AHL for 113 games in his career. It’s not incredibly normal that a player with an extended stay in the AHL makes a big mark in the NHL, but Marchand is anything but normal. Marchand’s years in Providence were a major part of what has made him so damn good today, so let’s take a look at his journey.

In his time in the AHL, Brad Marchand was able to make quite the name for himself. Coming off of a big season in the QMJHL and a promising World Juniors showing, the grind to make it to the NHL began for the Halifax, Canada native. In his first season with the Providence Bruins, Marchand portrayed what made him so good in juniors. He maintained his strong playmaking ability and added the snarl we all know and love by putting up 59 points (41 of which were assists) and 67 penalty minutes.

The next season was a massive one for Marchand’s development. He bounced between the minors and the big leagues throughout the season, not able to find any sort of consistency at the NHL level. For a Bruins team that was looking for scoring, Marchand went goalless with just a single assist in the 20 games he played in the NHL. Despite the very minimal success with Boston, Marchand still managed to put together a successful AHL season with 32 points in 34 games with Providence.

During that season’s playoff run, Marchand was apart of the Black Aces. When a hole seemingly opened up for the skilled forward when David Krejci went down with an injury, the Bruins elected to give NHL journeyman Trent Whitfield the shot over the young Marchand. That choice did not work out for Boston, as Whitfield failed to record a point in the four games he played and the Bruins suffered one of the franchise’s biggest collapses in team history, blowing a 3-0 series lead to the Philadelphia Flyers.

Following the infamous 2010 collapse, Brad Marchand made quite the promise in the annual exit meetings with the then Bruins’ head coach Claude Julien. Despite failing to reach the back of the net once in 20 NHL games AND not reaching 20 goals in either of his two seasons in the AHL, the former 3rd rounder promised to hit 20 goals in the 2010-2011 season. So naturally, the undersized forward who was never a prolific goal-scorer faltered and had a bust of a season, right? Well, you all know that isn’t the case. Marchand scored 21 goals and helped lead the Bruins to their first Stanley Cup victory, ending their nearly 40-year drought. 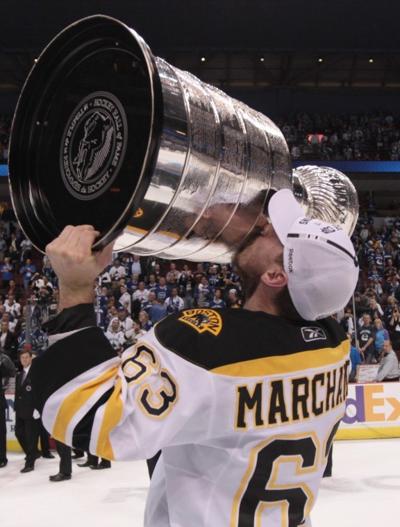 Year after year following his rookie season, Marchand’s role with the Bruins continued to evolve. He’s steadily progressed from a 40 to 50, to 60, to 80 and now 100 point player. Playing in the AHL was just the first step out of many for Brad Marchand to cement himself as one of the best players in the entire NHL. By winning the AHL Graduate of the Month Award, it seems Marchand has had a bit of a “come full circle” moment.

I feel it is worth adding that the Bruins took their time with Marchand and it paid off. Not every player can skip straight past the AHL and jump to the NHL and just because they have the skill, speed or size that doesn’t always mean success. This is important to the Bruins’ system that is filled with players with great potentials. Just because guys like Zach Senyshyn, Jakub Zboril, and Trent Frederic have spent their first few pro years in the AHL, that doesn’t mean they don’t have the chance to become true NHL players.

Check out the new Black N’ Gold Hockey Podcast that we recorded below! You can find our show on many worldwide platforms such as Apple Podcasts, Google Podcasts, iHeart Radio, Spotify, SoundCloud, and Stitcher.