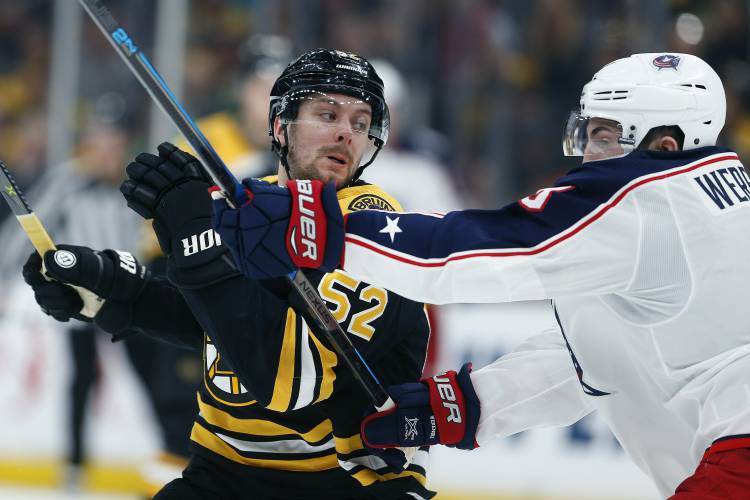 Merzlikins
Kivlenieks
The Columbus Blue Jackets made their way to TD Garden to kick off the 2020 slate of the season for both teams. The Blue Jackets came into this one without a single regulation loss in their last ten games and 6-0-4 record as a result. After a tough shootout loss to the New Jersey Devils, the Bruins looked to get back in the win column. Good news came in the form of David Krejci, Torey Krug, and Charlie McAvoy all returning to the lineup. Additionally, how about a milestone to get 2020 going?

He is one of 14 players in NHL history to accomplish that feat, joining Sharks forwards Joe Thornton and Patrick Marleau, who also hit that mark tonight. pic.twitter.com/yl8e6FTUXK

It appeared that the Blue Jackets found themselves a golden opportunity just 17 seconds into the game. But, Gustav Nyquist’s goal was overturned after a video review for goaltender interference. The Bruins dodged a bullet early on. Joakim Nordstrom flew into 2020 with some jam.

It was a feeling-out process for much of the rest of the period. While the Bruins controlled the flow of the game for a solid portion of it, there weren’t many great scoring chances and the period moved pretty quickly with very few whistles. In fact, it was the quickest period of the season for the Bruins. The Blue Jackets outshot the Bruins 9-8 through the first 20 minutes.

With the quick first period came a lack of penalties. That changed in the second period when Nick Foligno went off for hooking with 15:12 remaining. The Bruins entered the man advantage with the third-best power play in the NHL and an eight-game power play goal streak. Zach Werenski nearly gave the Blue Jackets the lead in shorthanded fashion, but hit the post.
The Bruins held an 8-6 shot advantage in the period through 10:28 of play, but overall in the game until this point, Columbus had already blocked 12 shots. That’s a pretty effective way to keep a game scoreless.
Dean Kukan then went off for tripping shortly after. David Pastrnak scored his 30th goal of the season just four seconds into the power play. Krug (22) and Patrice Bergeron (19) had the assists to help Pastrnak become the NHL’s first player to reach the 30-goal mark this season.

Just under a minute and 30 seconds after the Pastrnak goal, McAvoy found his way to the box for interference. The Bruins went killed it off. Brandon Carlo made some waves in the period on both sides of the ice. A great defensive read on a late 2-on-1 to keep the game scoreless, and a smart offensive zone pinch nearly extended the lead.

Great play on the 2-on-1 here by Brandon Carlo pic.twitter.com/RiDZfGrGzx

Sneaks down into the slot and even after the play appears to get broken up, stays there and rings one off the iron. pic.twitter.com/yoPEGZfDnP

Zdeno Chara took a holding penalty within the final minute. The second period flew by, much like the first. The main difference is that David Pastrnak scored. Despite being down by a goal, Columbus didn’t let up. They held a 14-12 shot advantage in the period, bringing their total advantage to 23-20. A huge third period awaited both teams.

The Bruins killed off the remaining portion of Chara’s holding penalty, but Sonny Milano got the Blue Jackets on the board not too long after. He sent the puck towards net seemingly with the idea of it bouncing off of Matt Grzelcyk or Nathan Gerbe, and it bounced off of Grzelcyk as him and Gerbe battled in front of the net. The game was tied with 17:54 still remaining.
The third line and Charlie Coyle went on to create some great chances, amongst others, but neither team wanted to budge and fall behind late in the game. Jake DeBrusk had an excellent chance on a rolling puck slip out of his grasp in the final two minutes. Ending this stalemate in intermission was not an easy task. Some great effort of Grzelcyk through the neutral zone and beyond made the DeBrusk chance happen.

Some incredible puck movement by Matt Grzelcyk almost leads to the tiebreaker.

When Grzelcyk gets going, he gets GOING. pic.twitter.com/ZuZpa5Wvrv

Both goalies played pretty well in regulation, and in doing so forced this game to overtime. There wasn’t a lack of goal scoring for a lack of trying. It became one of those games where you wait for something to open up and end it.

Pastrnak nearly buried his second of the game and 31st of the season early on. Pierre-Luc DuBois made good on a one-timer set up by Seth Jones not too long after to end this one 52 seconds into overtime.

How a typical Bruins overtime plays out:

– Bruins control play
– Bruins almost score
– Other team breaks up a play
– Other team take its the other way in an odd-man rush
– Other team scores pic.twitter.com/ub9Uruxiik

An overtime loss is a rough way to start 2020 for the Bruins. Through the third period and overtime, the Blue Jackets outshot the Bruins 10-6, and 33-26 overall. Tuukka Rask made 31 saves. Next up are the Edmonton Oilers at TD Garden at 1 PM ET on Saturday. The Bruins are 24-7-11.

Check out the new Black N’ Gold Hockey Podcast episode 160 that we recorded below! You can find our show on many worldwide platforms such as Apple Podcasts, Google Podcasts, iHeart Radio, Spotify, SoundCloud, and Stitcher.

Ep 231 sponsored by @betonline_ag is now available!
Go to http://BetOnline.AG and use code CLNS50

Nothing says you're the biggest #NHLBruins fan around like this Oversized Gaming Chair from @Fanatics.
Click the link below for more details!