It was the perfect ending to the Boston Bruins Moms Trip and suffice to say, the ladies brought some much-needed luck as the boys in Black and Gold rallied from behind, beating the Winnipeg Jets 5-4.

With the first period underway, both teams had decent shifts with Boston outshooting Winnipeg early in the period. As the Bruins continued to push the puck towards the Jets net, it would be the other team who would strike first. Winnipeg’s Kyle Connor would net his 22nd goal of the season as he scored off a backhand at 7:35. Boston would be playing from behind and had multiple chances with a potential goal on a 2-on-1 on goaltender Laurent Brossoit. Zdeno Chara would be out for the game, reportedly due to issue with his jaw: he did not speak to the media after this morning’s skate. 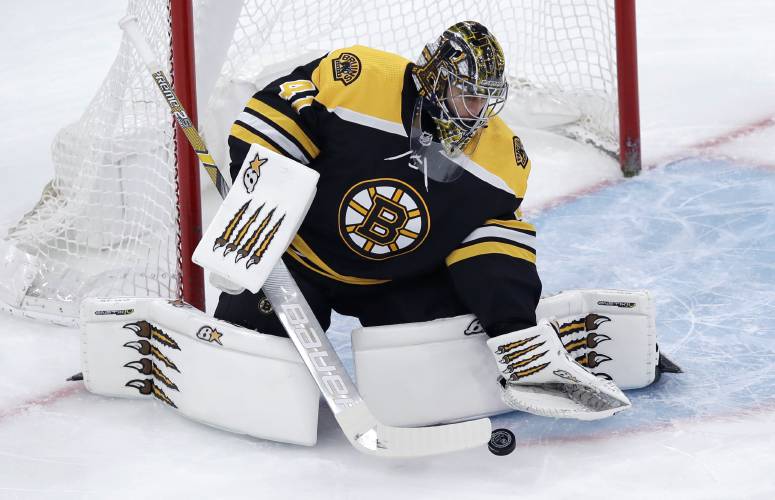 Boston would fire back and with minutes left in the first period, it would be number 33 for David Pastrnak as he scored, tying the game at one-a-piece. The 23-year-old right-winger extends his game-point streak to 12 games.

Boston would draw a  penalty in the first few minutes of the second period, however, they were unable to muster a goal down Winnipeg’s end. The Jets would go on the power-play on a “too many men on ice” call. At :23 seconds left to the man advantage, the Jets would score one past Jaroslav Halak, making it 2-1. Center Andrew Copp would notch his seventh goal of the season.

The Jets were down a man as the Bruins drew a tripping penalty that quickly led to a goal by (you guessed it) David Pastrnak.  The Czech-native blasted a one-timer rocket past Brossoit. In a back and forth effort, both teams have a good amount of zone time on either end of the ice. At 1:11 left in the period, Jake DeBrusk took full advantage of a Jets line-change and scored, putting the Bruins ahead for the first time. Winnipeg would get one last opportunity to even the score as they went on a power-play and unfortunately for Boston, their lead would be short-lived. Jets’ defenseman Neal Pionk scored his 4th goal of the season.

The third period saw the Bruins go on the power-play but they were unable to score despite some really good missed chances. After some miscues down Boston’s end, Winnipeg’s center Mark Scheifele would pot his 22nd of the season, making the score 4-3.

Jake DeBrusk took the puck to the net on a self pass that would bounce off Brossoit, creating a rebound opportunity that saw David Krejci setting up a play, allowing Pastrnak to notch his seventh career hat-trick in regular season, tying the game 4-4. Seconds later DeBrusk would score his 13th and second of the night as he tipped the game-winning puck in Winnipeg’s goal.

5-4 over the Jets. A hatty for @pastrnak96 and two for @JDebrusk! pic.twitter.com/v4uvYs0nbz

Boston would draw a penalty, however, they were unable to score. The Bruins continued to play heavily down the Jets zone, keeping the momentum on their side. Winnipeg had chances as the clock ticked down to the final minutes of the game and in a nail-biter, Boston held on to win in regulation 5-4.

WHERE TO WATCH: NHLN, MSG+, NESN