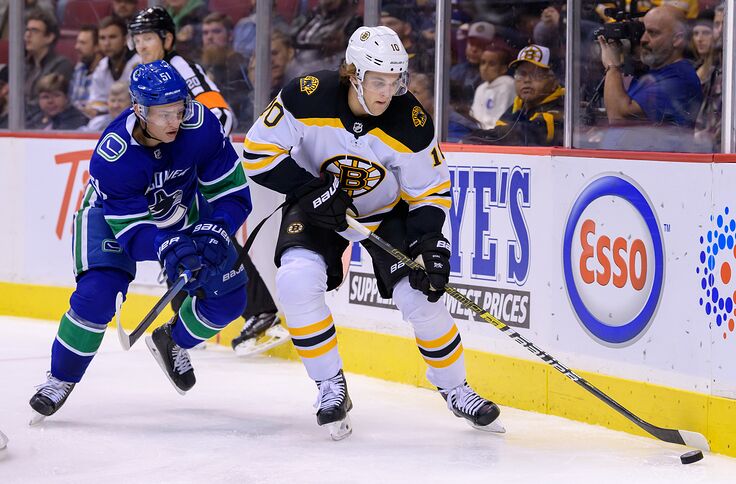 Another back-to-back stood in the way of the Bruins, starting with the Vancouver Canucks. Just recently beating the Winnipeg Jets and Minnesota Wild in a back-to-back set the tone for another one. The Chicago Blackhawks are next up after this one, tomorrow night at 8 PM ET at the United Center. It’s definitely an interesting way to get back into the swing of things for the Bruins after their long break.

Both teams were playing with great pace in the early going. Most notably was the Kuraly-Coyle-Bjork line creating havoc on the forecheck.

Charlie Coyle buried a nice goal off of a shot from Charlie McAvoy, but a challenge was called by Canucks head coach Travis Green to check for offsides. While the play looked to be offsides during the review process at first, it was ruled a good goal and the Canucks were assessed a delay of game penalty for losing the challenge. McAvoy’s helper on the goal was his 18th, Anders Bjork’s was his eighth. It was 1-0 Bruins with 5:36 remaining.

Despite only getting on the board once, the Bruins held a healthy 13-6 advantage in shots going into the first intermission. I don’t think the Canucks didn’t play bad despite not generating a lot of chances.

The Canucks were assessed two penalties in quick succession – delay of game on Troy Stecher and tripping on Alexander Edler. As a result, the Bruins were given a brief 5-on-3 with 13:14 remaining. Solid play from Jacob Markstrom helped lead to a huge penalty kill for the Canucks, and the score remained 1-0.

David Pastrnak had six of the first 20 Bruins shots, and Markstrom stopped them all. He also stopped a shorthanded breakaway chance from Chris Wagner, while Wagner was working to kill of Bjork’s hooking penalty. The Bruins went on to kill the penalty successfully. Tuukka Rask made a nice save of his own on Canucks captain, Bo Horvat.

Matt Grzelcyk got the sequence going from behind the Bruins net for Brad Marchand’s goal. Patrice Bergeron (21) and Charlie McAvoy (19) ended up with the helpers though. A great sequence from the start increased the lead to two with 4:35 remaining.

Charlie McAvoy drives to the net and good things happen.

Brad Marchand taps home his 23rd goal of the season.

Shortly after the goal, Wagner went off for two minutes for hooking. Coyle saw a great shorthanded chance come his way, much like Wagner earlier in the game, but was denied by Markstrom. The Canucks failed to convert and the period eventually ended without any more goal scoring. Shots in the period were 17-9 in favor of the Bruins, bringing the game total to 30-15.

Markstrom continued to make big saves for the Canucks, robbing Jake DeBrusk on a give-and-go in the slot. The game could have been much more lopsided if he wasn’t in net. Despite trailing, in the game, Markstrom was fantastic.

Torey Krug went off for slashing with 7:22 remaining, giving the Canucks a huge opportunity to cut their deficit to one. The trend of solid shorthanded scoring chances continued, this time with Sean Kuraly toe dragging and his way to a chance that was stopped by Markstrom. In doing so, he forced a slashing penalty on Quinn Hughes, making it 4-on-4. David Krejci made it hurt on a nice play with Kuraly. Brandon Carlo had the secondary assist, his 13th of the season, while Kuraly’s was his 14th.

David Krejci makes it 3-0 #NHLBruins in the 3rd on the 4v4 pic.twitter.com/S9zrYC8kqC

Jay Beagle collided with Rask and McAvoy didn’t like it, so they had a tussle. Beagle received a two-minute minor for goaltender interference and ten-minute game misconduct as a result. Tyler Myers then took a delay of game penalty and created a 5-on-3. Karson Kuhlman buried one on the man advantage with 1:50 to go, marking his first goal of the season. Coyle (19) and Grzelcyk (13) had the helpers.

Charlie McAvoy was NOT a fan of Jay Beagle going into Tuukka Rask pic.twitter.com/0ofCrngAZw

Rask held on for the shutout in this one, making 25 saves for his third of the season. The final shots were 42-25 in favor of the Bruins, 12-10 in the period. The win marked four straight wins dating back to Jan. 21 against the Vegas Golden Knights. Next up are the Chicago Blackhawks tomorrow night at the United Center at 8:00 PM ET. The Bruins are 32-10-12.

Check out the new Black N’ Gold Hockey Podcast episode 164 that we recorded below! You can find our show on many worldwide platforms such as Apple Podcasts, Google Podcasts, iHeart Radio, Spotify, SoundCloud, and Stitcher.