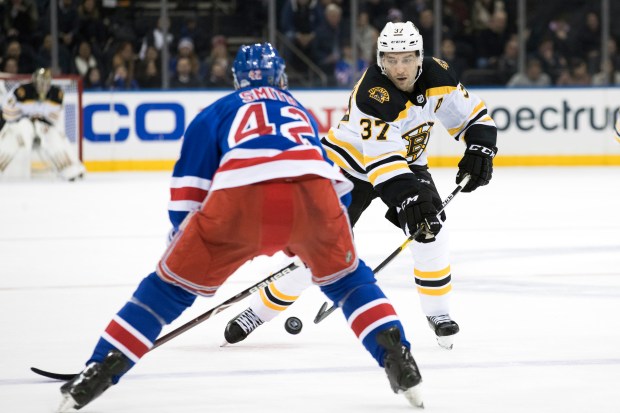 After a feeling-out process to start the game, things got going when Brad Marchand and former Bruins prospect, Ryan Lindgren found themselves in a scrum in front of the Rangers bench. Lindgren sat for two minutes for roughing as a result – giving the Bruins the first power play of the game with 8:29 remaining. Despite a few good chances, the Bruins couldn’t get one past Alexandar Georgiev.

It appeared the game was going to be scoreless heading into intermission, but a series of bounces following a shot from Charlie McAvoy sent the puck over Georgiev and in.

The goal was originally credited to Chris Wagner, but it was eventually changed to Charlie McAvoy. McAvoy’s third goal of the season was unassisted with 42 seconds remaining in the period. A pretty even period overall ended with an 11-9 advantage in shots on goal for the Bruins.

The Bruins held an early advantage in shots, 5-1 through the first five minutes of the period. Things got interesting when David Krejci inadvertently high-sticked Lindgren and drew blood, warranting a four-minute power play for the Rangers as a result. The Bruins managed to kill it off and maintain their lead.

A big scrum in front of the Rangers net and some cross-checking led to Marchand sitting for two minutes. It didn’t hurt the Bruins much, as Charlie Coyle forced a turnover at the defensive blue line on the penalty kill and made no mistake in burying it in shorthanded fashion. Coyle’s 14th goal of the season was unassisted with 1:18 remaining.

Brad Marchand doesn’t like to see anyone touch Patrice Bergeron and then Pavel Buchnevich cross checks his helmet off.

Somehow Marchand’s the only one in the box. pic.twitter.com/tPNAXpQBxm

Charlie Coyle buries the shorthanded goal — Boston's second in as many games.

Mika Zibanejad took a tripping penalty with 27 seconds remaining. No one scored before time expired in the second period. The Bruins held a 13-8 shot advantage this time around, bringing the total to 24-17 in their favor. Jaroslav Halak was having a very solid game in net.

A minute and thirty seconds of power play time remained for the Bruins to start the period. Ahead of the Karson Kuhlman interference penalty at 15:37, we saw a similar trend to the one we saw to start the second period, a 5-1 shot advantage. Halak made a big save on Ryan Strome early in the Rangers power play. The remainder of the power play was much calmer after that, and the Bruins killed it off.

Torey Krug took a tripping penalty with 10:55 left. Zibanejad made it hurt when he roped a wrist shot from the point off the post and in. It was a 2-1 game with 9:52 remaining. The screen from Pavel Buchnevich in front of Halak on the goal was key.

The goal gave the Rangers a very noticeable spark as a result. The crowd was into it and they generated a series of dangerous chances. The Bruins were forced into their own zone for much of the final five minutes of the game.

Georgiev was pulled for an extra attacker with around 1:30 remaining, and Rangers head coach David Quinn called a timeout with 35.5 seconds remaining. Patrice Bergeron put the game out of reach with 12.2 seconds remaining, following a nice interception in the neutral zone. Bergeron’s goal was his 26th of the season, Marchand’s helper was his 51st.

Shots on goal were even at nine in the third period, bringing the total to 34-26. Halak was instrumental in the win, making 25 saves. Things got a bit dicey at the end, but the Bruins came out with the win. Next up are the Edmonton Oilers on Wednesday at Rogers Place at 8:30 PM ET. The Bruins are 37-11-12.

Check out the new Black N’ Gold Hockey Podcast episode 164 that we recorded below! You can find our show on many worldwide platforms such as Apple Podcasts, Google Podcasts, iHeart Radio, Spotify, SoundCloud, and Stitcher.