It’s been a few days since the trade deadline and I still don’t quite know how to feel about it all. There’s no questioning if the Bruins improved, they did, but many (including myself) am still asking if Don Sweeney and co did enough for this season, but that’s not the point of this article. Regardless of what the Bruins did to affect the team for this year, the trades made certainly helped the team for years to come. 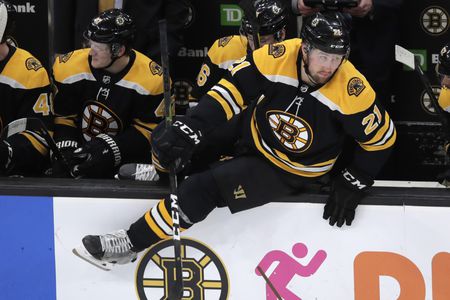 Unlike years in the past where we saw the Bruins’ management go after rentals like Marcus Johansson, Rick Nash (oof) and Lee Stepniak (even bigger oof), the Bruins acquired players with term. They saw how well it worked with last year’s acquisition of Charlie Coyle and looked to continue that success of grabbing players that won’t be gone at the season’s end.

Both Ritchie and Kase have extra years on their contract and even more years of team control due to their RFA status. The duo are both young and have plenty of room to grow on their already solid NHL careers. Nick Ritchie is a hard-nosed player that fits the style of play the Bruins love. The former 10th overall pick is still young at 24 years-old and with his recent play (three goals and three assists in his last four game) has a chance to trump his career-high in goals of 14.

If healthy, Ondrej Kase has a real chance to be a game-changer for the black and gold. Two seasons ago, the Czech Republic native hit the 20 goal mark in 66 games. The following season was unfortunately cut short due to injury, but Kase was well on his way to hit career highs in both points and goals with 11 goals and 20 points in 30 games. Now playing on a far better Bruins squad, we’d hope to see the improved play on his part.

The Bruins have a lot on their plate this offseason. Powerplay QB Torey Krug is an upcoming UFA and will certainly get paid whether he stays or goes. Matt Grzelcyk, Jake Debrusk, Anders Bjork and Karson Kuhlman are among the slew of RFAs that will get a considerable bump in salary. There’s no guarantee if Zdeno Chara will call it quits after this season, but if he doesn’t, that’s another contract to add to the books. Fellow Slovakian and backup goaltender Jaroslav Halak has been huge for the Bruins over the past couple years and it would be a tough loss if the Bs weren’t able to resign him.

The Bruins had about $17 million in projected cap space for next year before the deals. With the subtraction of Heinen and Backes’ combined $7.3 million and addition of Kase and Ritchie’s and additions of roughly $4.1 million, it gives the Bruins an extra $3.2 million worth of cap space to work with. If we loosely project what the Bruins UFA and RFAs we get contracts that look like this:

Kevan Miller – Honestly no idea with all of his injuries, I think he’s a goner regardless. 1m

Jake Debrusk – This one really depends if it’s long-term or a bridge, I’d say 4-5m

Check out the new Black N’ Gold Hockey Podcast episode 168 that we recorded below! You can find our show on many worldwide platforms such as Apple Podcasts, Google Podcasts, iHeart Radio, Spotify, SoundCloud, and Stitcher.