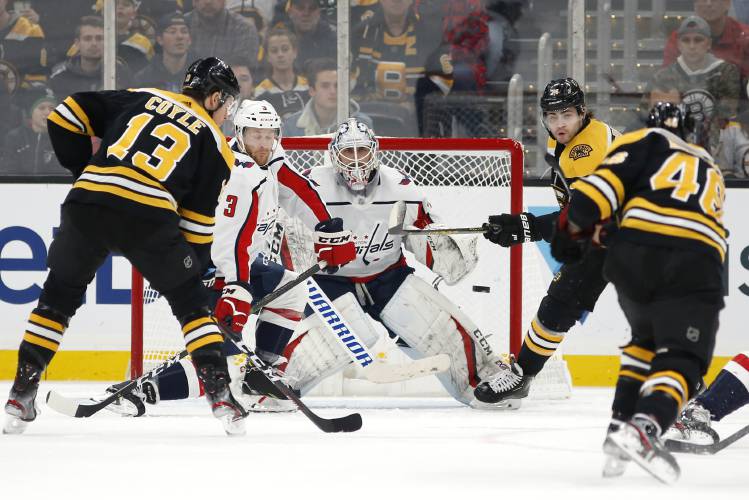 While it’s not completely set in stone, things are trending in the right direction towards the NHL returning to play. The Bruins are going to be competitive no matter what lineup they put together, but there are certain line combinations that could work better than others. With two new forwards, Nick Ritchie and Ondrej Kase, getting some of their time to get acclimated cut short, it’s important that the coaching staff puts them in ideal situations as soon as possible.

The second and third forward lines

There are so many different ways that these lines can be put together, but there is one in particular that sticks out to me the most as the best option. Putting the lines together in this fashion would essentially give the team a line 2a, 2b situation because the lines are so balanced.

There’s no doubt that Jake DeBrusk, David Krejci, and Ondrej Kase could find success together if that is how the second line is constructed, but I like this option a bit better. Ritchie and Kase have some familiarity together from their time as teammates in Anaheim, as well as Boston for a brief period of time, obviously.

Ritchie on the left-wing gives the line a physical boost and someone who can get pucks deep, make defenders sweat behind the net on the forecheck, and bring a formidable netfront presence. Couple those abilities with a savvy playmaker like Krejci, and a speed demon with great hands and shooting ability like Kase, and you have a dangerous line.

Moving DeBrusk down to the third-line left wing adds even more speed on the wing combined with Anders Bjork on the right-wing. The DeBrusk-Coyle-Bjork line has been pretty effective together in the past, and would give the Bruins an excellent third line. Speed to burn and plenty of skill on the wings, and an all-around beast in Charlie Coyle in the middle. Structuring the middle-six forward group this way gives the lineup the most balance in that area, in my opinion.

With the top line obviously intact, and the middle-six structured the way it is, that leaves the Bruins with a small quandary on the fourth line. With Par Lindholm most likely being the extra forward, it comes to down to who plays right wing, Chris Wagner or Karson Kuhlman.

I think they should roll with a committee at the position. Both are effective fourth-line players, so a committee would be ideal. If it gets to a point where one player is playing much better than the others, then roll with that player.

The same thing goes for the third defensive pairing, who plays with Matt Grzelcyk? John Moore likely being the extra defenseman, leaves them with Jeremy Lauzon or Connor Clifton to play with Grzelcyk. Both players have had solid seasons and bring similar skill sets – defensemen that play physical and can move the puck effectively. A committee between the two gives the team more flexibility.

Luckily for the Bruins, these lineup questions aren’t too pressing. They can be seen as good problems to have, and that’s how I view them. They’re in a great position as the league inches more and more towards returning to play.

One thought on “Lineup Questions Facing The Bruins Going Forward”

Episode 51 is also available on the BNG website as we talk about this past week for the Boston Bruins. #NHLBruins #NHL #HockeyTwitter check it out here https://blackngoldhockey.com/2022/01/21/black-n-gold-weekly-episode-51/

Episode 51 of the show with @DJaillet95 is here. We discuss the last week of action for the Boston Bruins, talk Tuukka Rask, and overreactions from fans. Check it out and please subscribe #NHLBruins #NHL #HockeyTwitter https://youtu.be/Er62teF1s-8