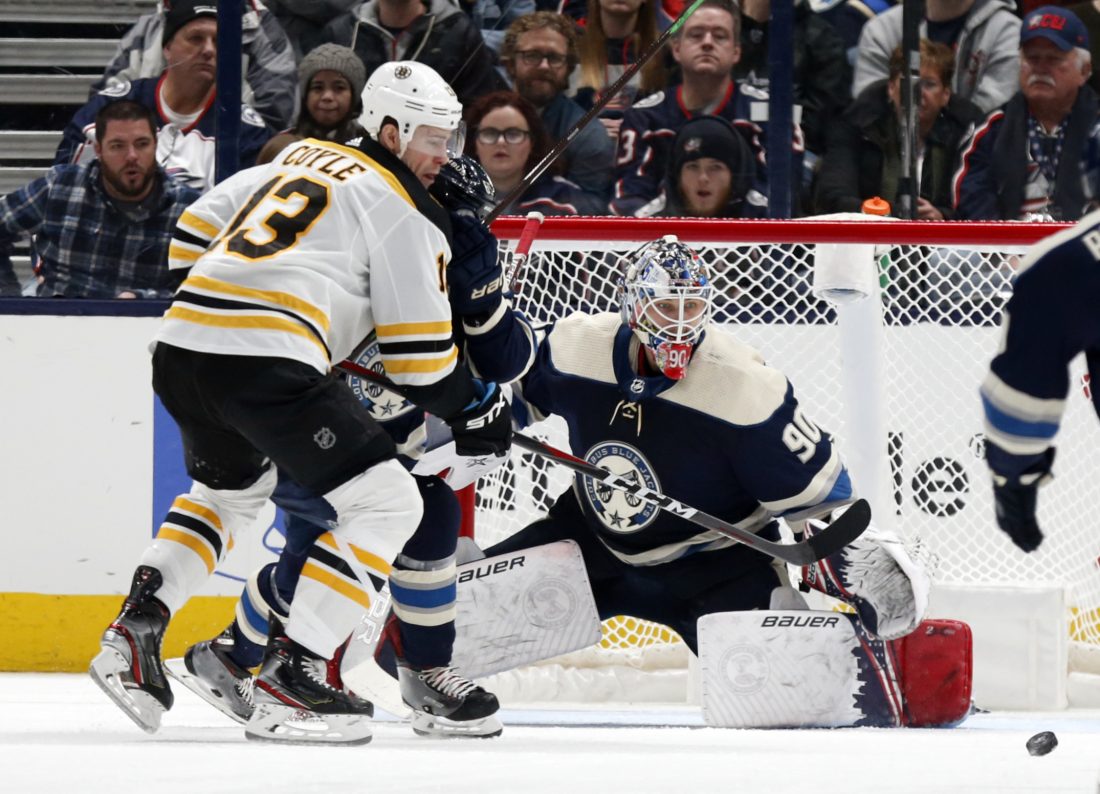 As expected in the first game action since early March, both teams were feeling each other out and getting their feet under them. Things were fairly pedestrian for the first four minutes. That was until Boone Jenner got the Blue Jackets on the board four minutes and 27 seconds in, connecting on a sweet saucer pass from Liam Foudy.

John Moore took the first penalty of the game with 6:42 remaining for interference. The Bruins killed the penalty successfully. Good to not start 0 for 1. Not too long after, Matt Grzelcyk and Seth Jones both took separate penalties. Grzelcyk went off for hooking, Jones went off for slashing, and a 4-on-4 ensued. Brad Marchand went off for hooking late in the 4-on-4. Zach Werenski then buried a one-timer from the point just seconds later on the 4-on-3 to give the Blue Jackets a two-goal lead with 1:42 left.

Gustav Nyquist made it three for the Blue Jackets just 18 seconds later. Outside of being down on the scoreboard, the Bruins just couldn’t put much of anything together in the offensive zone. Luckily, it doesn’t count for anything. The Bruins were outshot 13 to 7.

The Bruins played a bit better to start the period, but still struggled to score. Brandon Carlo went to the box for tripping with 12:42 to go. Jaroslav Halak came in for Tuukka Rask with 10:06 remaining. Rask stopped 17 of 20 shots. Elvis Merzlikins did the same for Joonas Korpisalo. Korpisalo stopped all of the 11 shots that he faced.

David Pastrnak got the Bruins on the board, at last with 7:44 remaining, beating Merzlikins on the five-hole. Sean Kuraly and Charlie McAvoy had the helpers. Seth Jones took his second penalty of the game, this time for interference with 5:03 remaining. Nothing came of it for the Bruins.

David Pastrnak is back.

Pastrnak’s goal was the only one scored in the second period. Despite being bailed out by a couple of posts, the Bruins definitely turned things up a notch, primarily offensively. Shots in the period were 12-9 in favor of the Blue Jackets, bringing the total to 25-16.

Pierre-Luc DuBois went off for cross-checking early in the period, but the Bruins couldn’t make it hurt. Shortly after, Par Lindholm went off for goaltender interference. Both penalties were killed effectively.

Jaroslav Halak was pulled with around a minute left, but it wasn’t enough. Alexandre Texier buried an empty netter with 1.5 seconds left and that was it. Shots in the third were 8-6 in favor of the Bruins, 31-24 Blue Jackets overall. Although it was a lackluster performance for the Bruins overall, it’s nothing to freak out about. Next up are the Philadelphia Flyers on Sunday to get round-robin play started. Puck drop in Toronto is set for 3 PM ET.

Check out the new Black N’ Gold Hockey Podcast episode 187 that we recorded below! You can find our show on many worldwide platforms such as Apple Podcasts, Google Podcasts, iHeart Radio, Spotify, SoundCloud, and Stitcher.