These were the not-so-impressive lines from when the Bruins played the Sharks on February 18th. The Bs still managed to get a big win (albeit controversial) with this group of forwards. In a few weeks, the Bruins will have their all-star forward back in David Pastrnak. Pasta, along with the trade-deadline additions of Charlie Coyle and Marcus Johansson will make the Bruins forward depth incredibly deep and dangerous. The question remains still, what does this lineup look like with a healthy roster?

There’s a lot of things to take into account. Could Pastrnak slide back in on the 2nd line with Jake Debrusk and David Krejci? Johansson seemed to have immediate chemistry in his first game with Krejci and Debrusk on the 2nd line. He played very well, and that line generated a lot of really good scoring chances throughout the game, including a pretty tic-tac-toe goal from the trio. If that line continues to gain more chemistry, it’s probably worth keeping them together.

Maybe Cassidy decides to reunite the super-line. Obviously, the combination of Marchand, Bergeron, and Pastrnak is arguably the best line in hockey but with Danton Heinen finally finding his game and the 1st line still producing at a high level, it would be interesting to keep the line together and try out Pastrnak on the 3rd line.

Pastrnak on the 3rd line? How do can you put a PPG player on the 3rd line and still expect him to produce? Well, a man by the name of Phil Kessel did that and look where it got the Penguins. The notorious HBK line consisted of Carl Hagelin, Nick Bonino, and Kessel, and was a huge reason why the Penguins were able to win their 2016 Stanley Cup. The ability to have three lines that can score at will is very hard to come by, especially in the playoffs.

It’s very likely the Bruins will end up playing the Toronto Maple Leafs in the first round of the playoffs. The Leafs also tout a very effective 3rd line, with former 30 goal scorer, Nazim Kadri centering rookie Andrea Johnsson, who has 19 goals and 36 points in 56 games and William Nylander, who’s coming off of back to back 61 points years. I’d say a line of Pastrnak, Charlie Coyle and David Backes (who looks a lot better playing with Coyle) would be a match-up favorable to the Bruins.

With that top 9, and a 4th line that coach Bruce Cassidy can throw out against almost any other line, Cassidy can pick and choose his match-ups and expect great results. There may not be a deeper forward group in the NHL. 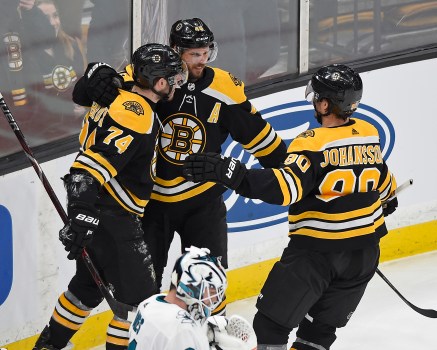 In all honesty, I think Cassidy will end up resorting to putting Pasta back on the top line, but I really do think it’s at least worth a shot to test Pastrnak on the third. Even with the super-line, Cassidy can just pick and choose who he wants in the lineup. They have so many options with the additions at the deadline. Coyle can end up playing with Krejci or continue to play well at 3C. Johansson had a lot of success in Washington with Nick Backstrom and Alex Ovechkin, so maybe he’s another guy to try out on the top line. Rookie Karson Kuhlman and Peter Cehlarik both looked at home in their handful of games with the Bruins and played on the 2nd and 3rd line but look to be healthy scratches as of now. Even Joakim Nordstrom has seen looks all throughout the lineup this year and continues to be a speedy, defensively reliable player. The Bruins have options galore.

Now at the end of the day, whatever group of forwards the Bruins throw out will be a really good one. The acquisitions at the deadline give this team a brand new feel and make them a real Stanley Cup contender. Oh boy, are playoffs going to be fun.