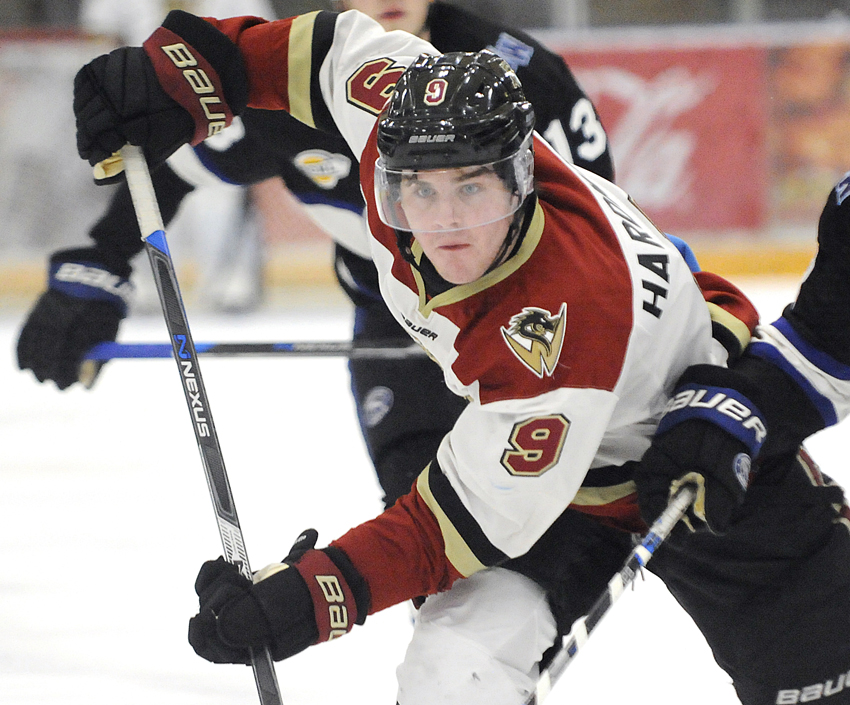 A native of Hanover, Massachusetts, the early portion of Mike Hardman’s hockey career started with the Bay State Breakers and Providence Capitals as a young kid, and eventually blossomed into a very productive year in the BCHL that helped him catch the eye of Jerry York and the Boston College Men’s hockey staff. I caught up with Hardman ahead of development camp.

For Hardman, his determination and diligence paid off in his quest to play college hockey at the Division I level. Hardman will join the Boston College Eagles, along with 2019 first-round pick Matthew Boldy, Spencer Knight, and Alex Newhook, amongst others this fall.

Dream come true to announce my commitment to play D1 hockey at Boston College. Can’t thank my family, friends, and coaches enough for their support ! #GoEagles

After development camp, Hardman is very excited to be a part of such a talented group. “It’s really exciting, grew up in Hanover so going to Beanpots and Hockey East games, it’s really just a dream come true to play for coach York and just to go to school at BC is unbelievable,” said Hardman. “We have a good class coming in, but if you look at all of the other Beanpot schools, there’s a lot of good freshmen going to those schools too, so, it’s going to be a really, really fun year and hopefully we can win some championships.”

Hardman played prep hockey at The Winchendon School (MA) before playing for the USHL’s Des Moines Buccaneers for a year ahead of his most recent season with the BCHL’s West Kelowna Warriors.

His lone season with West Kelowna, ahead of his freshman year with Boston College this fall was his best yet. His 72 points (39-33-72) in 58 games were good for third in BCHL scoring behind Ryan Brushett (84) and Alex Newhook (102). His 39 goals were good for second in the league. His success at the BCHL level drew the attention of more college teams, so Hardman eventually decided to flip his original commitment from Union College to Boston College this past January. Although he gained a lot of confidence from playing in the BCHL, he knows the transition to NCAA hockey will be a challenge.

What a ride it's been ! So many memories made and so many people met. Thank you @BCHLWarriors for an unforgettable season. I'll cherish my time in West Kelowna forever

At 6-foot-3, 190 pounds, Hardman carries a big frame on the left wing and uses his size to his advantage. He looks forward to continuing to do so in the future, starting with development camp. “I think the big thing for me is I’m a big guy with a good shot, good hands as well and I think my skating has gotten a lot better in the past couple years,” said Hardman.

As much as he recognizes his strengths on the ice, he is looking forward to improving parts of his game that need some work. “The biggest thing for camp is to see how my game is against others, you’re playing against some guys that are first-rounders, so I’m just looking at these guys and seeing what I need to work on,” said Hardman.

Additionally, he wants to improve certain aspects of his skating game, “It’s my first three steps, accelerating, I think when I’m skating, I can keep up with anybody, but getting off to a quicker start is the biggest thing for me.”

Unfortunately for Hardman, his name wasn’t called this past weekend at the NHL draft, but he isn’t going to let going undrafted deter his focus going forward. “I was pretty disappointed with what happened in the draft, but I think it might be the best thing for me going forward,” said Hardman. “I’m really just humbled and happy to be invited to Bruins camp, it’s going to be a ton of fun.”