The Anaheim Ducks were fed a huge, healthy bowl of pasta this afternoon as they fall to the Boston Bruins in a Columbus Day matinee game at the TD Garden. Knowing very well that they’d be facing a stingy Ducks team, Boston needed to play tighter and more stingier. Both teams came into today’s game evenly matched at 4-1-0 and despite the high amount of turnovers (Boston) and icings (Anaheim), the B’s would come out with a solid  win.

In the first period, the Bruins would get on board as David Pastrnak nailed his first of the day during the power-play. With Anaheim’s Michael Del Zotto in the box and Boston going against a team with a high penalty kill, the first line would once again connect. As Anaheim attempted to swipe the puck out of their zone, defenseman Torey Krug stopped the play, feeding it to Patrice Bergeron who then neatly sent the puck to his teammate. With a one-time snipe to the net, the 22-year-old Pasta would net the goal eight seconds into the penalty.

Coming into the second at 8:22 Anaheim’s defenseman Hampus Lindholm attempted to to get the puck out, however it was picked off by Boston’s Brad Marchand who sauced the pass to Pastrnak, making the score 2-0. Anaheim’s would answer as right-winger Rickard Rakell found enough space to send a quick wrist shot pass Jaroslav Halak, making the score 2-1.

In what would be his fifth hat-tick of his career, Pastrnak would swipe the puck off the faceoff, sending a wrist shot pass Anaheim’s goaltender John Gibson in the second period at 2:20. Minutes later, Boston would once again be on the power-play. Both DeBrusk and Marchand were fighting for puck in the corner, sending it back out where it reached Krug. With a home pass by Marchand, Pastrnak would tip in his fourth goal of the day making it 4-1.

Anaheim would get on board at 16:08 in the third when center Adam Henrique (from a Nick Ritchie pass) sent one in, making the score final score 4-2. With the win, the Bruins are now 2-0 on home ice with a 5-1 record.  The Ducks are now 4-2-0,  playing behind first-year coach Dallas Eakins.

Anaheim came into the game ranking third in the league on the penalty kill at 93.8%, but has yet to score on a power-play.  Goaltender John Gibson came into today’s match-up with a .961 save percentage, however with today’s loss he now has a .826 save percentage. He made 19 saves on 23 shots. Bruins’s Jaroslav Halak made 30 saves on 32 shots and now has .938 save percentage. 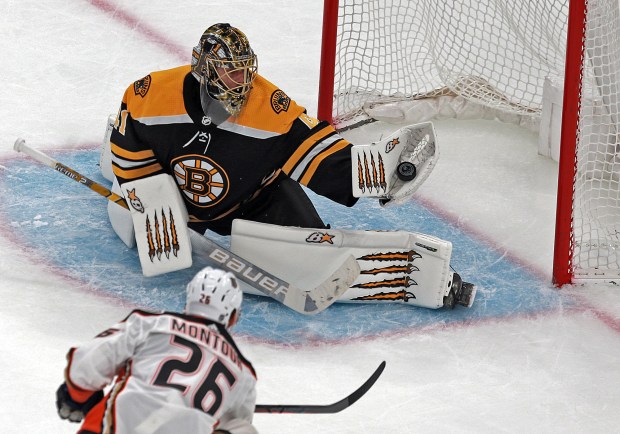 Bruins Brett Ritchie faced his brother Nick for today’s match-up. David Krejci was seen going down the tunnel in the first period, nursing an injury. He was seen coming back on the ice for a few shifts during the second, however left  not returning for the third period. Coach Bruce Cassidy offered no updates on Krejci.

NEXT GAME: AT TD GARDEN versus Tampa Bay Lightning at 7:00 PM

We'll save you some time.