On July 2, the 2017 Boston Bruins Development Camp roster and the official schedule was released. Development camp started yesterday, July 7. Here is the schedule from yesterday and the rest of it going forward. A list of who is attending is presented as well as some other information:

(Locations and times are subject to change)

(Players are listed in alphabetical order by last name)

*Indicates attendance to Development Camp is on an invite basis

Like with the forwards, there are a lot of new faces at development camp this year on defense and in the crease with the goalies. Learn more about the 2017 Boston Bruins development camp forwards here. The question is, who are these guys and what is worth knowing about them?

The 17-year-old native of Örnsköldsvik, Sweden played J20 hockey for Modo Hockey in Sweden. As many seventh-round picks are, he is a project, but one with some upside. He only played three games at the U18 level and had two assists.

In his second season at the J20 level, Berglund tallied five goals to go along with 10 assists, for 15 points in 37 games. Those stats are pretty impressive for a defenseman playing in the most competitive Swedish junior hockey league at 17-years-old. He then played for just Modo Hockey and had one assist in 12 games.

It will be intriguing to see how a 17-year-old, right-shot defenseman does at development camp, although he turns 18 in less than a month.

Here’s what Kirk Luedeke of scoutingpost.com had to say about Victor Berglund:

“Small, skilled defender was a total stealth/under the radar pick, as no one we were with at the draft knew who he was. We’ll let Bradley describe him thus: “Our Swedish guys were on top of him. They think he’s a mobile D. He’s skilled, ultra-skilled, and he skates well. Small. Six-footer, but [European scouts] P.J. [Axelsson] and Sven [Svensson] and Victor [Nybladh], they were pounding the table for him and we went along with it and I think we might have something there. Talking to his strength coach after the pick, he’s got him working on putting some muscle and weight on so we look forward to seeing him, too, at development camp.”

Like Kirk noted, Berglund is on the smaller side at 6-feet tall around 165 pounds. Physical maturity will be essential for Victor Berglund’s development and hopes of playing professional hockey someday.

Ian Brady is the only current college hockey player on the list, along with Rob McGovern (U. Maine). A 23-year-old native of Lombard, IL, Brady spent four years as a right-shot defenseman at the University of Nebraska-Omaha. He stands at 6-feet tall, 205 pounds. He then went on to play two games for the AHL affiliate of the Buffalo Sabres, the Rochester Americans. He had one assist in those two games. What he will do next year is unknown.

Brady just finished up four years UNO in which he played 141 games. In those games, he tallied 15 goals, 62 assists, and 77 points. Most recently, in his senior campaign, he had 3 goals 18 assists and 21 points, good for his best scoring season in college. Brady is a USHL alumni of the Cedar Rapids Roughriders, a team in which he played three seasons with.

Brady is a USHL alumni of the Cedar Rapids Roughriders, a team in which he played three seasons with. He will be for sure be a fun prospect to watch with good upside as one of the older guys at camp this time around.

Daniel Bukac is an interesting prospect. Drafted with the Boston Bruins’ last pick in the draft, 204th overall, there appears to be some late-round value with Bukac.

The native of Most in the Czech Republic carries a solid frame at 6-foot-4, 185 pounds and skates well for his size. In his first season with the Brandon Wheat Kings, Daniel Bukac managed to score two goals and 15 assists in 72 games. With a bigger role next year, we could see some good things from the Czech blueliner.

Here’s what Kirk Luedeke of scoutingpost.com had to say about Daniel Bukac:

“Big, rangy Czech defender is raw and needs a lot of development, but could have a decent payoff down the road. Good skater for his size who will get better and more powerful in his stride as he adds lower leg strength. Long stick- terrific reach. Didn’t put up many points, but had a tough transition to North America with the Wheaties and came on strong at the end. More from Bradley: “He’s raw. He’s a project. Kid from the Czech Republic that played in the Western Hockey League. At the start of the year – he’s come leaps and bounds with his development. Talking to the people – the coaches, the management, and the GM in Brandon, they’re very excited about him coming back to Brandon. They’re expecting big things from him. We look forward to seeing him in camp.”

Bukac sounds like a great late-round value pick. Down the road, if he does get close to the NHL level he might have guys like Charlie McAvoy and Brandon Carlo to mentor him, as all three players are right-shot defensemen. I for one am very excited about Daniel Bukac.

The guy that many fans are the most exciting for in the new prospect development camp crop, Finnish defender, Urho Vaakanainen. The Joensuu, Finland native played for JYP in Finland as a 17-year-old and impressed even with little offensive production. The Bruins could have gone for a talented winger at number 18 overall, but Vaakanainen is by no means a bad pick.

With JYP, he tallied just two goals and four assists, good for six points in 42 games. Don’t be concerned about the lack of production. He is young playing against older players, and not all defensemen have to be a massive point producer.

Vaakanainen has confidence in himself, which isn’t bad. Let’s just hope it doesn’t turn into cockiness:

I like a kid with confidence. If Urho works on his offensive game and physicality, a bit, we could have a top-four guy in the making when Zdeno Chara is gone. He isn’t wrong about his skating and the fact that he is a two-way defenseman. Whether he is the ‘whole package’ is unknown.

Here’s what Kirk Luedeke of scoutingpost.com had to say about Urho Vaakanainen:

“Good height and long limbs; plus-skater who can move with speed, quickness and agility. Breaks out pucks efficiently with head up. Will join the rush and can handle the puck effectively from the blue line when the play is in the offensive zone. Smart defensive player who uses his length and reach to deny paths to the net. Not overly physical and prefers to use angles, gap work and a quick stick to keep opponents from generating scoring chances. Six points for JyP in his second pro season in the SM-Liiga, but could be on the verge of breaking out offensively with SaiPa next season.”

It’s time to jump on the Urho Vaakanainen bandwagon if you haven’t already. 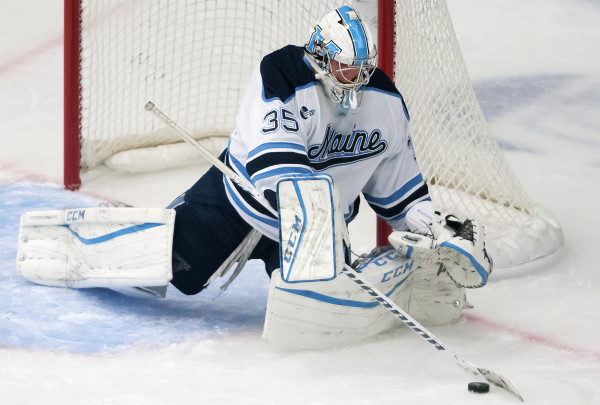 Robert McGovern: The Weymouth, MA native is new to Bruins development camp and spent the last two years at the University of Maine, of Hockey East in the NCAA.

The 22-year-old is a tower in the net at 6-foot-4, 220 pounds. Things haven’t been easy for McGovern in college due to a rebuilding Maine Black Bears team in front of him. Maine is a team that lacks great puck-movers on the back end.

In his NCAA career, he had made 49 appearances. His GAA dropped from 2.78 in year one to 2.99, but his save percentage went up from .905 to .912%. His overall record at Maine is 11-29-6, 9-15-3 this past season. Things have been rigorous for McGovern, but he is still an impressive player, with good qualities playing against a high level of competition.

The spotlight will be bright as there are only three goalies at camp. Jeremy Swayman and Daniel Vladar being the others. Thank god Don Sweeney drafted a goalie. Trading a third-round pick for Zac Rinaldo made it so he missed out on promising goalies like Wilbraham, MA native Keith Petruzzelli, and Memorial Cup Champion goalie Michael DiPietro, as well as other goalies. This is not meant to diminish Swayman’s value by any means. Six goalies were taken in the third round.

An Anchorage, AK native, Swayman stands at 6-foot-2, 190 pounds in the blue paint and could join camp invitee Rob McGovern at the University of Maine in the 2018-2019 season. Autocorrect tries to correct his last name to ‘Swagman.’ New nickname?

Last season with the USHL’s Sioux Falls Stampede, Swayman appeared in 32 games and finished with a 2.90 GAA, and a .914 save percentage. He was ranked as 12th on NHL Central Scouting’s North American goalie list. Not bad for an 18-year-old being thrown into over 30 appearances his first season at a new level of competition.

Playing in the NCAA next year, no matter how much action he gets, will be very beneficial for his growth as a prospect.

Here is what Kirk Luedeke had to say about Jeremy Swayman:

“High-end athlete with good size who probably isn’t finished growing (his dad is 6-6) checks all the boxes for a developmental project goalie. Excellent quickness and great hands- glove and blocker are effective at catching pucks or directing them away from danger areas. Gets a good lateral push and tracks pucks well. Put up very good save percentage and GAA numbers (.914, 2.90) on a non-playoff USHL club, and was often lost in the spotlight of other bigger-name goalies playing in that league. Needs to be more patient at times- gets caught trying to do too much and will have to put in the work to refine his game and keep getting better. Says all the right things, but the proof will be in the continued progression and body of work.”

Kirk notes his Dad’s height being 6-foot-6, so if Jeremy keeps growing, we could see another Ben Bishop with that size. Ben Bishop was once a Maine Black Bear too. Did that just blow your mind? Kirk also notes that it was tough for Swayman to succeed as much as he may have wanted to with a non-playoff team in front of him.

Kirk also notes that it was tough for Swayman to succeed as much as he may have wanted to with a non-playoff team in front of him. The thought of him growing with at a higher level with a Maine team will hopefully improve.

Swayman is a guy to be excited about because the Boston Bruins really needed to add a solid goaltending prospect and they did. He will be a bit of a project, but one that sounds very promising.

Development camp season is an exciting time for all. Fans, coaches, and other players see the future of the organizations that they are involved with at the time.