Getting To Know The Newest Boston Bruins Development Camp Forwards 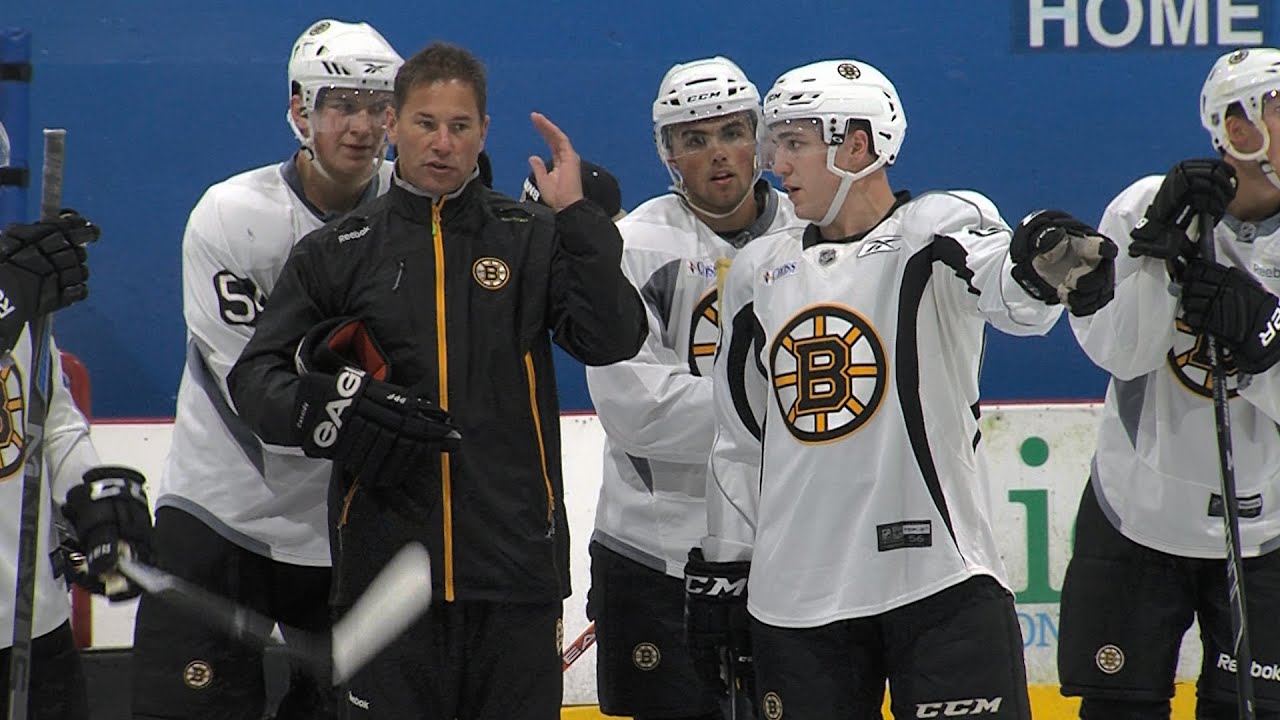 Earlier today, the 2017 Boston Bruins Development Camp roster and the official schedule was released. Here is what was released:

(Locations and times are subject to change)

(Players are listed in alphabetical order by last name)

*Indicates attendance to Development Camp is on an invite basis

There are a lot of new faces at development camp this year. The question is, who are these guys and what is worth knowing about them?

Mason Jobst: We start with Mason Jobst, a 23-year-old forward who plays at Ohio State University in the NCAA. Jobst has seen great scoring success in his first two years as a Buckeye and will likely carry some heavy weight on his shoulders heading into his junior season.

The Big-10 is not an easy conference to play in, Jobst doesn’t let it bother him too much. He’ll have a new Big-10 foe, as the University of Notre Dame is relocating there this season. Jobst is left-handed and stands at 5-foot-8, and weighs around 185 pounds. He clearly uses his size well, has great skills, and a great offensive mindset.

In 74 NCAA games to date, Jobst has tallied an impressive 31 goals and 54 assists, good for 85 points. Very impressive underclassman numbers for the Speedway, IN native.

Jobst boasts many illustrious titles, they are listed in the video below:

Jobst will be a player worth watching at development camp next week and in the future. I definitely wouldn’t hate to see him sign in Boston when his NCAA career comes to an end.

Karson Kuhlman: Next up is 21-year-old University of Minnesota-Duluth Bulldog right-handed center, Karson Kuhlman. Kuhlman is 5-foot-11 and around 180 pounds. He has been a Bulldog in the NCHC for three seasons and will be senior this upcoming fall.

In 122 games as a Bulldog, he has 26 goals and 34 assists, good for 60 points. He only has 29 PIMs in his college career which displays good discipline, a good temper, and poise. Not the most impressive point totals, but serviceable and worth noting nonetheless.

Kuhlman is a native of Cloquet, MN and plays in his home state, a hockey warehouse. The Bulldogs fell to the University of Denver in the National Championship game this past season. He gained some valuable experience in his first season as an upperclassman. After wearing the “A” on his sweater the past two seasons, Kuhlman will be the Bulldogs captain for this season.

Here is a video of Karson and his UMD buddy Adam Johnson. Adam knocked Boston University out of the national tournament in overtime.

It’s good to see the Bruins bring in a right-winger here because they have a very weak right-wing prospect core outside of Zachary Senyshyn.

Josh has had a solid start to his college hockey career, in 72 games he amassed 18 goals, 34 assists, and 52 points. Most recently, he had 27 points in 35 games. Those are pretty good numbers on a team that struggled last season in Miami U (Ohio). He carried a -13 rating throughout his first two seasons, which isn’t horrendous considering the team he is playing for and the tough teams they have to face. Melnick will wear the “A” on his sweater next season for the second time.

Melnick is a player that I am most excited about. He made good of an uncertain situation that for his sake will hopefully improve. Also, he is a right-wing, which is a position that I have been screaming for the Don Sweeney to improve. Whether Melnick ends up wearing the eight-spoked B someday is a discussion for the future, not now.

T.J. Moore: Holy Cross forward, T.J. Moore hails from a state known as a hockey warehouse, Minnesota, like Josh Melnick. The Edina, MN native stands at 5-foot-8, 169 pounds and uses his size well, especially when in the process of creating offense.

In 97 games in the AHA with Holy Cross, he has tallied 39 goals, 37 assists, and 76 points. Most recently, Moore was nearly a point-per-game players with 25 points in 27 games. Moore is an exciting and skilled right-handed forward.

For the same reasons as Josh Melnick, I am excited to see what T.J. Moore can do at camp, and I look forward to monitoring him closely in the future.

R.J. Murphy: R.J. Murphy has a different story. He is 18-years-old and 6-foot-2, around 195 pounds. He spent this past hockey season playing for the USHL’s Dubuque Fighting Saints, as well as for St. Sebastian’s school, a prep school in Needham, Massachusetts. He didn’t do much with Dubuque, just 2 goals, 2 assists, and 4 points in 13 games.

He didn’t do much with Dubuque, just 2 goals, 2 assists, and 4 points in 13 games. Things turned around at St. Sebastian’s, playing against top prep teams and their respective young talent. At St. Sebastian’s, in his hometown of Needham, MA, he compiled 13 goals, 17 assists, and 30 points in 29 games to make him a little over a point-per-game player.

He is committed to Harvard University for the 2018-2019 season, and his father won a national championship there in 1989. It will be interesting to see what the youngster can do. Bruins fans may be able to monitor him closely in his time as a member of the Harvard Crimson in the future.

Cedric Pare: The first Boston Bruins 2017 draft pick on our list. Pare was selected in the sixth round, 173rd overall and is from Lévis, QC, Canada. He is 18-years-old and stands at 6-foot-2, around 205 pounds. Pare is a left-handed shooting centerman and isn’t known for his explosive scoring touch, but his two-way game. Part of this is because the Saint John Sea Dogs were one of the CHL’s best teams this year and playing time was sparse.

His numbers were lackluster this past year and looked like this; 64 games, 5 goals, 11 assists, and 16 points. He played five games with the Sea Dogs during the 2015-2016 season, so this past season was his first full one in the rigorous QMJHL. An increase in playing time in the future could improve his development.

“Big-bodied, toolsy center who didn’t see a lot of playing time on a stacked, veteran team that won the QMJHL championship and played for the 2017 Memorial Cup. Strong below the dots and in the corners, but skating needs to improve mainly in the first steps and lateral agility to boost an effective short-area game. Hard shot but needs to get it off faster. Grinds for pucks and does well to shield them in possession but not overly skilled or creative. At his best when driving the net and using his size to box out defenders.”

Kirk also mentions how Pare resembles a combination of Patrice Bergeron and Ryan Spooner. A very interesting combo for sure there. He also mentions how he isn’t flashy but is heavy on the puck, a quality in players that the Bruins like. Pare will be an interesting player to watch at camp. 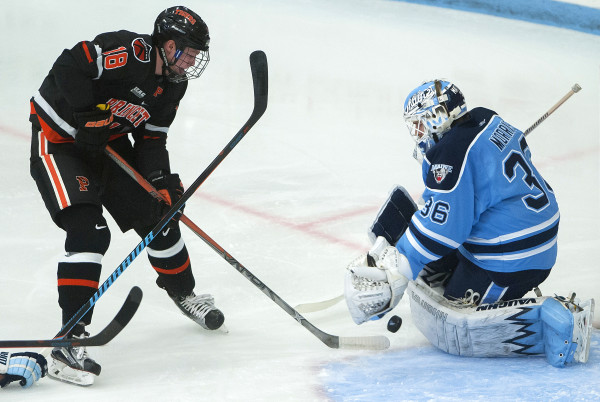 Eric Robinson resurrects the college hockey trend, as he is a Princeton Tiger. Princeton plays in the ECAC. Robinson is 22-years-old and 6-foot-2, around 200 pounds and is a left-handed shooter. He is a New Jersey native, like Josh Melnick, but from Bellmawr instead of Annandale.

His first two seasons weren’t anything special as a Tiger, but with increased playing time this season, he had 13 goals and eight assists, good for 21 points in 34 games. One of the bigger guys in the new crop of forwards, Robinson will wear the “C” on his jersey as a senior at Princeton.

Rounding out our list is the second Boston Bruins 2017 on our list. Jack Studnicka hails from Tecumseh, ON, Canada. He plays for the OHL’s Oshawa Generals and displays some quality assets. At 6-foot-1, around 175 pounds, the right-handed Canadian centerman skates well and has a knack for directing offensive flow and generating scoring chances. The 18-year-old was drafted in the second round of the 2017 draft, 53rd overall.

Studnicka doubled his point totals from his first season as a General. In 64 games, he scored 18 goals and added 34 assists, good for 52 points. He excelled in the playoffs as well, with five goals, 10 assists, and 15 points in 11 games.

Studnicka is a very exciting young player and will have plenty of eyes on him at development camp.

“Rangy center’s stock really came on after a disappointing regular season got a surge with strong OHL playoff and subsequent World Under-18 tournament performances. His thin, reedy build will require significant off-ice conditioning work to add some mass and strength to. Above average skater who has the quick-burst to get to pucks in short areas and can also beat defenders in open ice. Handles and shoots the puck well; has the offensive tool kit to put up bigger numbers in the OHL next year and beyond. A smart, hard-working two-way center who is good on faceoffs and understands the importance of three-zone hockey. A solid citizen and leader type- will have a letter on his jersey at some point.”

Focus on the last sentence in particular:

“Solid citizen and leader type- will have a letter on his jersey at some point.” Not something you see in player analysis much, regardless of the sport.

Not something you see in player analysis much, regardless of the sport. This intrigues me even more about Studnicka, and I have high hopes for him, as all Bruins fan should.

(Information: All heights, weights, stats according to hockeydb.com, eliteprospects.com)