Bruins Answer The Bell Against Lightning 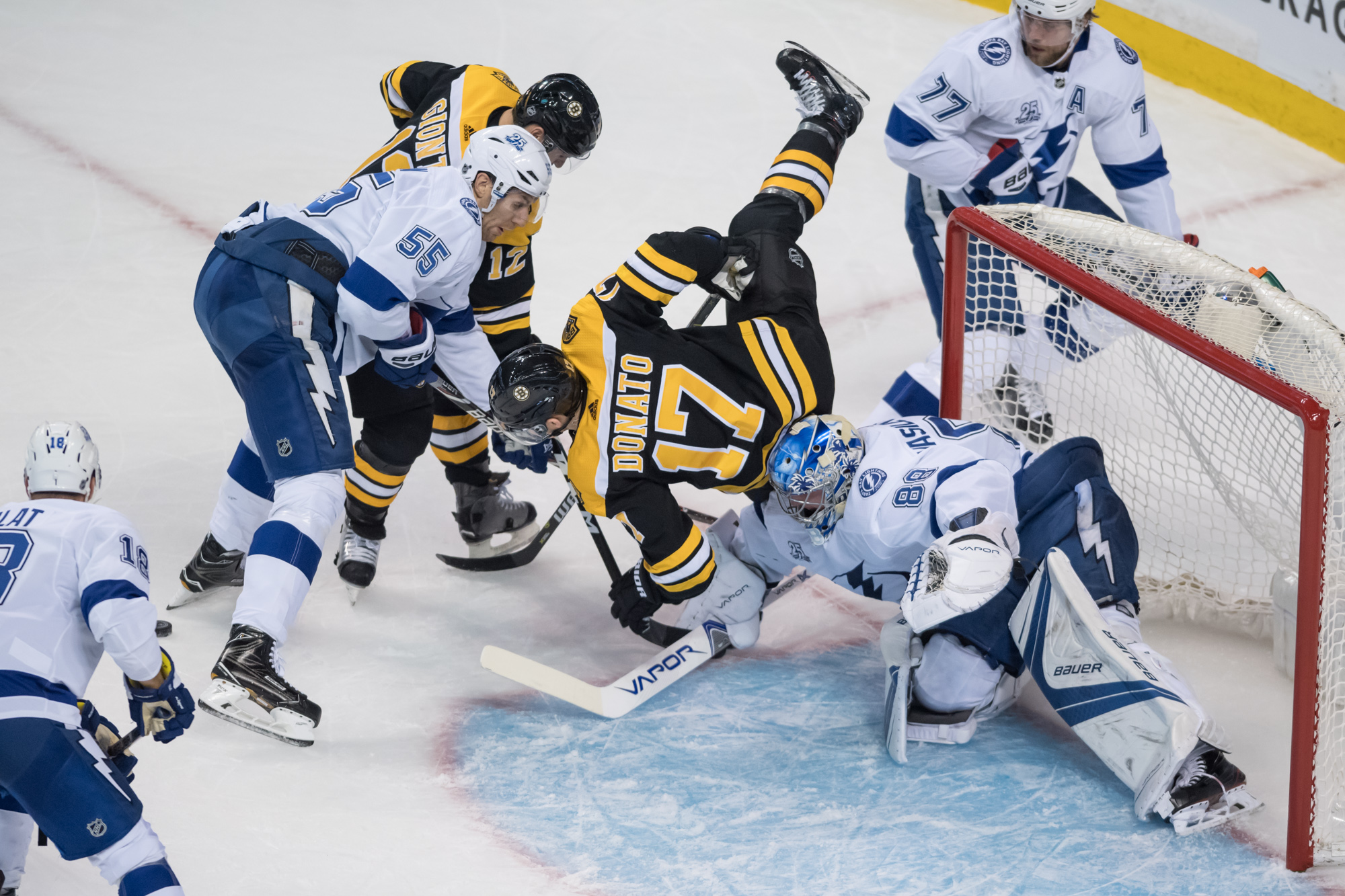 On the Bruins’ recent West Coast road trip, we’ve heard a lot about the teams’ lack of physicality and how it could be a crucial thing missing from the lineup come playoff time. We’ve heard a lot about how the Bruins lack a true tough guy from the same mold as a Shawn Thornton-type player. Certainly, with the way this league is trending, we’re seeing teams go away from the traditional enforcer-type and go with younger, faster, more skilled players.

This idea with the Bruins lack of physicality was stopped cold last night. Seemingly from the start, the B’s came out the aggressor. Tommy Wingels was physical right away, with a big check on Mikhail Sergachev. Wingels has been one the biggest proponents of physical play seemingly right from his move from Chicago.

A heavy, physical start for both clubs tonight. Wingels got Sergachev in the corner with a good hit, and already the two teams are familiarizing themselves with pleasantries.

The Bruins took it to the Lightning all night and clearly asserted their status as the first place team in the Atlantic Division. No example was more perfect than the scrum that took place midway through the second period. On a net drive, Corey Conacher shoved Brandon Carlo into Tuukka Rask who took great exception and took a few swings at Conacher. Even the Bruins goalie was not about to let the Lightning assert themselves.

NOTHING BUT RESPECT FOR MY GOALIE TUUKKA RASK pic.twitter.com/fy8NHofjwg

Other instances included David Pastrnak having a go with Dan Girardi and David Backes mixing it up with the Lightning bench. This Bruins team won’t take any crap from anyone, and the most important part is they have each other’s back. They are willing to go to war for their teammates and honestly I’ve not seen this type of fight from this team since the Stanley Cup runs from 2011 and 2013.

When the Bruins as a team get physical, there is no stopping them, not even the high-octane offense of the Lightning who looked to be out of their comfort zone the more physical the game got. If the Bruins can play this way consistently in the postseason, there’s no reason to think they could be playing deep into May, and possibly even June.

One of the key things I noticed last night was the physical tone set by the fourth line of Tim Schaller, Noel Acciari, and Wingels. They were first to nearly every puck and put a body on every Lightning player when they had the opportunity. Schaller even buried a goal on a net drive late in the first period. The “Granite Man” in fact drove to the net so hard, he knocked the entire goal over.

Tim Schaller sticking his nose in there and collecting the geno! #NHLBruins pic.twitter.com/JV3Y1b81tU

Wingels was in the lineup after it was announced Sean Kuraly would miss the game with an upper-body injury. Regardless, the fourth line this entire season has been a very quality line. Outside of the first line, this fourth line might be the best line on the team. The Bruins haven’t had a fourth line this successful since the days of Daniel Paille, Gregory Campbell, and Thornton. Having a capable fourth line is a big key to a deep playoff run for this Bruins team, and Bruce Cassidy clearly trusts this line in any situation.

Last night, the Bruins more than brought the hammer and looked to set up shop in Tampa’s head especially late in the game. If the physical play was a question mark, the B’s passed that test with flying colors last night, playing with an edge none of us have seen in quite a long time. One thing’s for sure, this Bruins team can answer any challenge. If they continue to answer these challenges in the postseason, we’ll be gearing up for another Duck Boat parade.