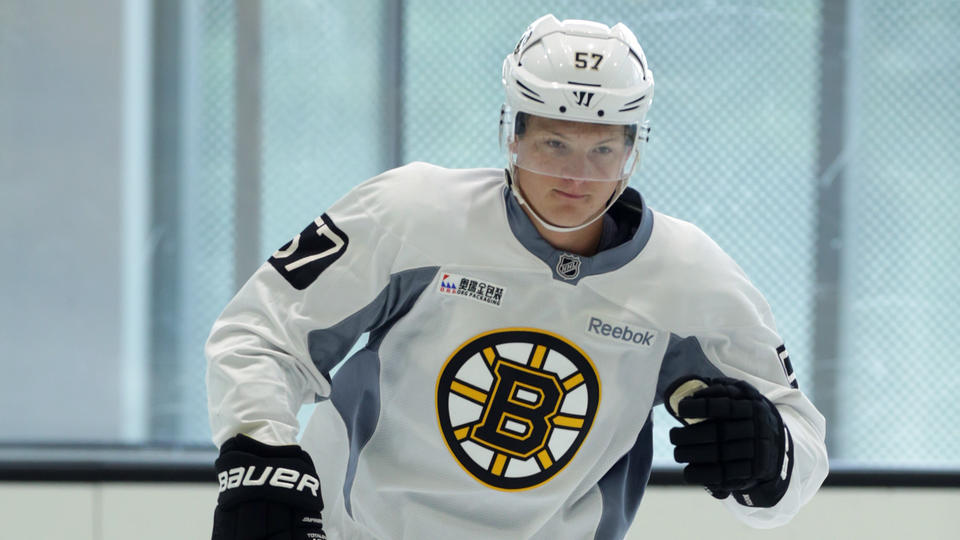 Last night in a thrilling 5-4 Providence Bruins overtime victory over Atlantic Division-leading Lehigh Valley Phantoms, 2016 first-round draft selection Trent Frederic scored his first professional goal in his second American Hockey League game. The first of many goals from this talented young man from the St. Louis, Missouri area came at the 11:05 mark of the second period and was unassisted as seen in the Tweet below followed by some interesting insight from @BruinsNetwork account owner Anthony Kwetkowski.

Trent Frederic scores his 1st-career goal in the AHL off the 2-on-1 rush with Czarnik. Frederic carried the puck from the defensive-end with his head up the whole way. His pass didnt get through but he stuck with it and roofed the loose-puck. #NHLBruins pic.twitter.com/CzgxRyAA7w

The top-shelf tallie is just a small sample size of what this 6′-5″ 2015-pound forward can do with only two games with the top minor-pro affiliate of the Boston Bruins. Before joining his Providence team, the now 20-year-old center chose to shorten his colligate hockey career with the University of Wisconsin Badgers after his sophomore year for the next level in the higher ranks of professional play. In 66 games playing in the NCAA Big-Ten Conference, the 29th selection from the National Hockey Leagues Entry Draft from Buffalo, New York contributed 65 points (32-33-65) under the exceptional tutelage of former NHL’er and Badgers current Head Coach Tony Granato.

Granato had this to say to Wisconsin State Journal’s Todd D. Milewski in his article on March 14, 2018, after Frederic went public with his decision to leave school and turn pro.  “Trent Frederic is 100 percent an NHL player. No question in my mind,” Granato said. “Does Boston want him to play in Providence for the remainder of this year and 40 games next year, similar to what Minnesota just did with Luke? Only they know that plan, and that plan changes fast.””Does it leave a void at center ice for us temporarily? Absolutely,” Granato said. “You take Trent Frederic out of your lineup, a guy that probably could have got 25 or 30 goals in college hockey next year, you don’t just all of a sudden find another one in your backyard.”

First professional-game is in the books for Trent Frederic— excellent performance. He won plenty of face-offs, threw several hits, pushed the pace & was involved in some quality-chances. His size & strength is impressive— Bridgeport couldn’t get him off the puck. #NHLBruins

Tony also mentioned the loss and value in taking a player of Frederic’s caliber out of the lineup for the 2018-19 NCAA Men’s Ice Hockey season. “Does it leave a void at center ice for us temporarily? Absolutely,” Granato said. “You take Trent Frederic out of your lineup, a guy that probably could have got 25 or 30 goals in college hockey next year, you don’t just all of a sudden find another one in your backyard.”

Many Bruins fans didn’t approve of his selection in the first-round and believed he was a reach for possibly being a mid-second-round projection, but it’s heavily rumored the Anaheim Ducks were going to select him with the 30th pick from intel gathered on that particular 2016 draft day. It was a solid pick in my opinion and continues the additions to the depth up the middle of this franchise even though the center position throughout the organization may be over-filled.

Frederic had this to say about his departure from the Big-Ten team and movement closer to the east coast and dream of reaching the top professional league in the world. “I wish I would have won some more games and left a bigger mark on the program,” Frederic said. “That’s one of the reasons I wanted to come back. It was really hard to leave. “But I just thought in my heart, that’s where I wanted to go. I want to make the National Hockey League, and I thought this was the best opportunity for me.”

Trent had decent success at the international level appearing in the World Junior Championships with his 2016 U-18 team which captured a bronze medal contributing seven points in seven games (4-3-7) and took home another bronze medal at the 2018 U-20 WJC scoring five points in seven games. His four-goal game from this year’s tournament from Buffalo, New York can be seen below in the video provided below.

Providence first-year Head Coach Jay Leach told Providence Journal’s Bruins beat writer Mark Divver after he skated in his first pro game on March 18, 2018, against the Bridgeport Sound Tigers. ‘He didn’t even skate with us (before today). He literally skated with three guys yesterday. So we just kind of threw him in. Clearly has ability. I’m excited to get him into some practices this week, so he can really get used to the way we play….

The 39-21-3-2 Providence Bruins are back in action tonight in the second straight game in as many nights against the 42-16-4-5 Lehigh Valley Phantoms at the Dunkin’ Donuts Center in Providence, Rhode Island. The B’s are 1-2-0 against Lehigh Valley and in six games last season went 2-2-2-0, and both teams are seemingly going to avoid playing each other in the AHL’s Calder Cup Playoff first-round matchup when the season ends. Including tonight’s game, the Bruins have 11 regular season contests before returning to the postseason a place the B’s had decent success reaching the Eastern Conference Finals ultimately losing to the stronger Syracuse Crunch last spring.

Congrats @tfreddy42 on signing with the @NHLBruins. Thank you for being a great role model and friend to Jaxton. We’re excited to watch your career progress! The Bruins got a great player and one of the most thoughtful and kind guys we’ve met. #badgers @BadgerMHockey #nhl pic.twitter.com/jfr3pJAirM

🚨 TRENT FREDERIC! 🚨@BadgerMHockey is on the board. They lead Michigan 1-0 | Tune in NOW on #FOXSportsGO: https://t.co/lru746RzFZ pic.twitter.com/y5qo7bDTXZ

Trent Frederic. Breakaway. Goal. @BadgerMHockey and Michigan are all tied up at 2-2 on #FOXSportsGO: https://t.co/JiRjUo46qI pic.twitter.com/do51pR76kI