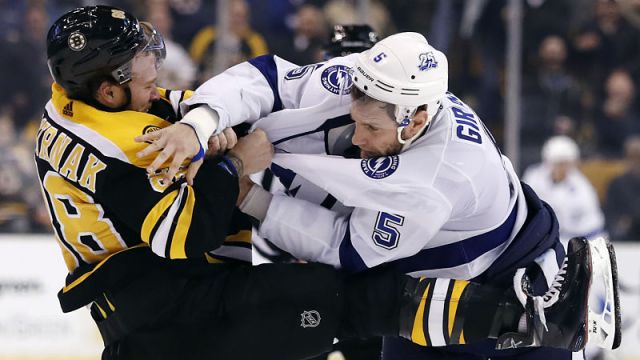 The Bruins are coming into tonight’s game against Tampa Bay with a two-point lead over the Lightning for first in the Atlantic Division and Eastern Conference. The Bruins have already clinched either the first or second spot in the Atlantic division, so now they only have to worry about getting home ice advantage throughout the Eastern Conference side of the playoffs by becoming the 1 seed in the East (Nashville currently leads the President’s Trophy race with 113 points in 79 games played.) Boston has won the past three games against Tampa this season, and are one of only three teams in the entire NHL that haven’t lost to Tampa this season, the other teams being Vegas and surprisingly, New Jersey. Boston is also tied with Vegas for the second lowest amount of goals allowed to Tampa with 4. It should be another great playoff atmosphere, especially since it looks like if either of these teams wants to make a deep playoff run, they’ll have to face each other at one point in time.

NOTE – Tuukka Rask is the expected starter for Boston, while Vasilevskiy is set to take the net for Tampa

Charlie McAvoy – After being out for a considerable amount of time after playing one shift in a game on March 3rd and getting hurt, the Bruins young star (One of many) is back in the lineup. After starting last season in the playoffs, McAvoy has developed into one of the best defencemen under the age of 25 and would have some serious Calder Trophy buzz around him if it wasn’t for the missed time due to injury. I expect Bruce Cassidy to limit his ice time tonight, but McAvoy will still play a big role alongside veteran captain Zdeno Chara.

Jake DeBrusk – After his stellar come back game against Florida, DeBrusk seemed to lack that pop that he had in the game the next day against Philadelphia. As the second line left winger, he’s projected to be up against Yanni Gourde, a winger who has 61 points in 79 games played in only his first 20+ games played NHL season. DeBrusk will have to be efficient on defense if he wants to keep Gourde off of the scoresheet tonight.

Nikita Kucherov – While Kucherov is having one of his best seasons to date, he has only managed to get two assists in three games against Boston so far this season. With Steven Stamkos out tonight, watch for him to get the puck even more than he usually does. But with the majority of Boston’s regular defensemen back this game and Rask in nets, he’ll have to play incredibly well to score tonight.

JT Miller – This will be Miller’s 6th game against the Bruins this season due to him being traded by the New York Rangers to Tampa at the deadline. In those five previous games, he has two goals and is -4 with 6 PIMs. But it isn’t his past games that Boston should worry about, it’s his recent ones. He is on a tear currently and since joining Tampa, he has 16 points in 16 games. He’s definitely someone you want to watch tape on if you’re Chara or Krug.