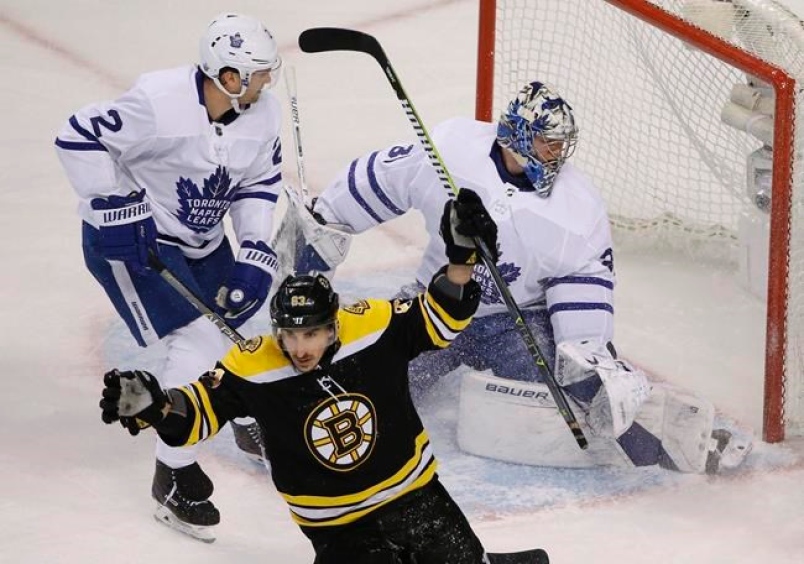 Riley Nash slides up to the top line with Patrice Bergeron out tonight. #NHLBruins pic.twitter.com/mRxyzZLSs6

The Bruins have changed some of their lines, with first-line center Patrice Bergeron coming out of the lineup due to an upper-body injury that is considered day-to-day. Matt Grzelcyk also comes in on the blueline. Andersen and Rask take the nets once again.

This game determines who takes the momentum in the series. If Toronto wins it, they go back to Boston tied after going down 0-2. If Boston pulls it off, they take a stranglehold on the series and force Toronto to play with their backs against the wall. With the absence of Patrice Bergeron, other players will need to step up in his spot and lead the team.

28 seconds. That’s how long it took for Torey Krug to pick the short-side corner on Fredrik Andersen. After the teams were able to get the game going, it became very apparent that the Leafs weren’t just going to roll over after going down by one. Toronto got some great zone time and was able to cycle the puck effectively and kept the puck in the Bruins zone. Toronto would get on the board after Boston left old foe Thomas Plekanec alone in front where he found the back of the net. Toronto played a fast-paced, aggressive style that put the Bruins on their heels and made them play in Boston’s end for the majority of the period. Boston looked shaky in the second half of the period. They weren’t able to get good, clean zone entries and didn’t get a ton of quality shots on net. 1-1 at the end of one.

Rask started the period off by misplaying a puck that almost ended up in his net if it wasn’t for a desperate save and Marner fumbling the puck in front of the net. The linesmen continued to throw everyone and their dog out of the faceoff circle. Boston was able to get some more chances at quick shots because of their speed, something that they need to continue to do if they want more offensive production. Rask stood tall as Dominic Moore had a great chance on a 2-on-1. The Bruins started to try and get their forwards to enter the zone with numbers by going for the long, cross-ice passes, and while it worked once or twice, one resulted in a Mitch Marner breakaway that Rask turned away. Toronto was able to control play and move the puck perfectly for nearly an entire shift, but couldn’t get it through Rask. Marchand brought the heat with a great spin-o-rama but missed the net. The Bruins struggled with clearing the puck out of their own zone, and this resulted in lots of Maple Leaf opportunities at scoring. Boston would break the tie with a great catch and release with a Pastrnak pass to a wide open Marchand. The Bruins continued to play much better after the goal, but the Leafs continued to put pressure on Rask and the Bruins defense. 2-1 after two.

Boston knew coming into the third period that they’d have to be nearly perfect defensively to keep the lead, and the showed in the first few minutes that they were committed to playing the hard minutes. Through Boston’s defensive commitment, they were able to catch an odd man break that left DeBrusk and Krejci in a two-on-one situation, which was executed to near perfection that ended with Jake DeBrusk scoring on a great shot. Boston did a great job making sure the puck crossed their own blueline when trying to exit the zone, something that they didn’t do as much as they needed to in the first two periods. Bruce Cassidy gave the fourth line a lot of key minutes around the 10-minute mark in the third period. Danton Heinen showed that he is someone to rely on with his play in his own zone with dangerous players like Matthews and Marner on the ice. Rask did not give out many rebounds in the first three-quarters of the period. With just less than three minutes left, Mike Babcock pulled Andersen. David Pastrnak rang a shot off of the post that could have put a nice bow on the game, but it wasn’t needed. The Bruins head home with a chance at clinching the series in Boston on home ice.

I call this piece "Tuukka Rask is in fact good" pic.twitter.com/l79NjiL8KQ

While Boston scored three goals, they did not get that many shots, with only 21 total. Rask is the backbone of the team, and he really showed up tonight.

1st: Tuukka Rask – If not for Rask, Boston would be heading home tied in the series. Rask only had to stop 31 shots, mainly due to the great shot suppression by the Bruins defense. He can definitely steal a game here or there, contrary to popular belief.

2nd: Jake DeBrusk – DeBrusk played a full, 60-minute game, and was rewarded for it. One of the hardest forecheckers of the game, and great on defense. He continues to impress in his rookie season.

3rd: Brad Marchand – After a great start to Marchand’s writing career come out earlier in the afternoon, he dazzled the fans at the ACC with his skating ability, and scored the eventual game-winner. Elite.

MUP (Most Under-Appreciated Player): Tommy Wingels – Wingels’ play tonight reminded me of the classic Bruins player. Tough, aggressive (But smart) and fast. He was relied upon in the tough times halfway through the period.

TOREY KRUG QUIETS TORONTO! 28 SECONDS IN AND THIS GAME IS 1-0! pic.twitter.com/IKLIlGGxOo

Not gonna lie. The surprise Bergeron scratch has me on the verge of full-scale panic mode. pic.twitter.com/Kae0IRRM60

Rask is the only reason this is 1-1

70 NHL teams passed on Brad Marchand before the Bruins took him 71st overall.

Brad Marchand in the playoffs pic.twitter.com/y6QvQjnbY2