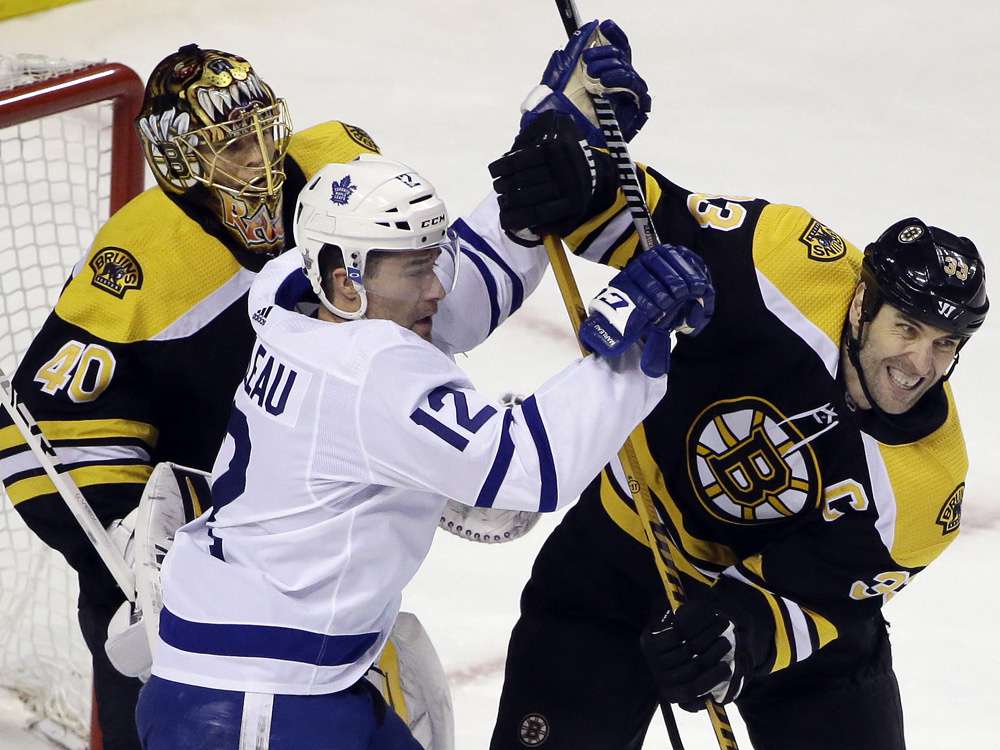 This is about as healthy the Bruins lineup will get this season. Bergeron is back after his one-game hiatus, meaning that Riley Nash moves back down to the third line. Kadri is back from his three-game suspension and will be looking to make up for his time away from the team. Andersen and Rask set up shop in the creases for tonight once again.

The Bruins are getting a chance to clinch the series at home in front of their fans. This will give even more motivation for Boston to wrap this up early, and the game gives Toronto a perfect opportunity to catch the Bruins sleeping. It’ll be a gritty game with bad bounces, bad calls, and great plays and it’ll be as exciting as ever.

Mike Babcock showed early in the game that he wasn’t afraid to change up his lines from the traditional ones that we’ve been seeing so far this series. After some pretty even back and forth chances, Toronto struck first after Connor Brown knocked in the puck out of midair after Auston Matthews tried a wraparound. The Bruins tried to get some energy from their offense, but with very little zone time it was hard for the Bruins to get anything solid going. This turned into some sloppy defensive play and resulted in a sneaky goal from Johnsson. Boston would head to the power play shortly after because of a weirdly broken stick that seemed like Rick Nash snapped it on the shot, not the slash. But it was called anyway, but Boston could not convert but did get lots of chances, including a shot that hit the post. Boston would end the period with a 15-6 shot advantage and down 2-0 on the scoresheet.

Boston had some great chances at the start of the period, but Toronto controlled play for most of the first half of the period by pinning the Bruins in their own end and making sure they couldn’t break out past the red line. Boston found some success in two 2-on-1’s that ended up with David Pastrnak drawing a tripping penalty. On the ensuing power play, David Backes was able to smack home a rebound off of the glass and in. But in a blink of an eye, it was 4-1 Toronto after a pair of goals from Bozak and van Riemsdyk that led to Tuukka Rask being pulled. After some bad penalties taken by the Leafs, the Bruins found themselves on a 5-on-3. Even though they had chance after chance, Boston did not convert. But this gave Boston a massive change in momentum, leading to Matt Grzelcyk dancing around low before he found a leaning Sean Kuraly in the slot with a great backhand pass that closed the lead to two. Boston would head off the ice with the momentum, but not the lead.

Boston started the period with just a handful of seconds left in the power play. Nash missed an empty net off of a Pastrnak rebound, and that was the best chance they would have on the man advantage. McAvoy would hit a post after a great chance from a faceoff win and in the next offensive break in, Travis Dermott would take a holding penalty that gave Boston their sixth power play of the night. Boston failed to convert once again, going to 1/6 on the night for their power play efficiency for the night. Boston knew that they needed a spark, so Cassidy sent the fourth line out, where Noel Acciari got one of the luckiest bounces I have ever seen as he whacked the puck off of Andersen’s skate and into the net. The Bruins close the gap to a one-goal lead. After an incredible back and forth that seemed to last a lifetime, the game hit the five-minute mark. That was when it really kicked up. Jake DeBrusk had a great opportunity where he scooped up the puck and just missed wide. Boston made some very aggressive passes around the offensive zone. Khudobin was pulled with just over a minute left, and after some great chances, Boston was able to call a timeout with 32.8 seconds left in the third. After some hectic faceoff hijinx, Toronto was able to clear the zone and kill the remaining time. 4-3 Toronto, and this series is going back to Canada.

These numbers from tonight's game via @NatStatTrick are something else.. pic.twitter.com/1SQh6JTb7p

These numbers are absurd. Doubling your opponent’s shots in the playoffs usually means that you dominated the game. One important difference to look at is the shot total was lower than the Scoring Chances For, meaning Boston just couldn’t get those shots off in time or accurately. If Boston continues to play like this, they won’t have any issue beating Andersen. They forced Toronto to take bad penalties, but could only convert on one attempt. This is something that they should address on the off day, along with their defensive effectiveness and ability to play like they did in the second half of the game for the whole sixty minutes.

1st: Noel Acciari – Acciari had one of the few plus nights on the team (+2) and was one of the best offensive players tonight. He assisted on the second goal and scored the third, and when he and his line were called upon in the later parts of the third to play good defense, he was able to shut the Leafs down.

2nd: Sean Kuraly – After a decent regular season, Sean Kuraly has really shown his value in the playoffs. He is one of the hardest competitors out there and gives it his all every shift. This was very apparent in his goal, where he threw all of his weight into flicking the shot past Andersen. He is an ideal player in the gritty, physical series that this is turning into.

3rd: Torey Krug – Krug played a Bruins-high 23:54 while getting two assists on goals one and three. He also six shots on the night, tied for second highest on the Bruins. After some uncharacteristically bad play by both Chara and McAvoy this game, Krug was a much needed solid defenceman for this team to play around.

MUP (Most Under-Appreciated Player): Anton Khudobin – After Rask’s less than stellar play in the first half of the game, it would have been easy for the rest of the team to roll over and quit. But they kept on trucking and because of the play of Khudobin, the Bruins were able to continue to inch closer and closer to their efforts to tie it.

…I would start chasing the matchup.

This team has taught us all that they can come back time and time again. Let's go boys, get the next one #nhlbruins

4-1 lead always safe when #TMLtalk are at TD Garden vs. #NHLBruins

Team scoring first goal has won all 5 games this series

My heart rate is still through my chest