Bruins Are No Stranger To Playoff Successes And Failures 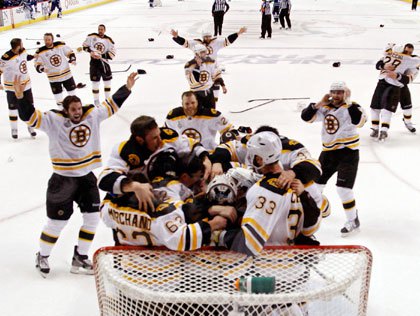 It’s the best time of the year. Beards, Snipes, Saves, and a Cup. In a two month span, all eyes in the hockey world are on the Stanley Cup Playoffs. The Boston Bruins are no stranger to this tournament and have had their fair share of playoff success. A championship in 2011 and a finals appearance in 2013. Those teams will live forever, and the memories of those playoff runs are always on our mind as fans of the team.

Looking at the core of this year’s team, it’s very similar to those cup teams. The captain is still the same, and Zdeno Chara is hungry to prove he still has a lot left in the tank. Patrice Bergeron has always been an incredibly dominant 200-foot player who comes up with big goals time and time again. Brad Marchand is always that little pest, that guy you’d hate if he weren’t on your team.

This doesn’t even mention guys like David Krejci and Torey Krug who bring their best at this time of the year. Tuukka Rask has come into his own the last two seasons and proving that he can indeed be that guy that can shoulder the load.

There’s no reason to believe this group can’t go deep and based on what I’ve seen this season I know it’s a possibility. The resilience this team shows time and time again are scarily similar to past cup teams that won’t quit no matter the deficit. This goes back to the strong leadership this group has and the fact they are willing to fight for each other.

Thinking about playoff success is easy because it’s the memories we try to remember the fondest. However, the Stanley Cup Playoffs are incredibly unforgiving and we as Bruins fans know the bad end of playoff and series losses all too well. The loss last season was tough in the first round against the Ottawa Senators even though we knew this team had a bright future ahead of them.

He’s not the biggest name on the @NHLBruins, but David Krejci has a history of playoff excellence. #StanleyCup https://t.co/wbup0hwHmp

It’s never easy to lose, but we have to remember that this journey is not easy for anyone and nothing is ever guaranteed. Everyone picked the Bruins to go far in 2014 when they won the Presidents’ Trophy, and we all expected them to be back in the Finals. The Montreal Canadiens had other thoughts and broke the B’s heart in a Game Seven loss at the Garden.

The Garden has always been a place of some of the best moments in recent past. Nathan Horton scoring, not one but TWO overtime goals against the Canadiens in the first round series back in 2011, Bergeron scoring the series-winner against the Maple Leafs in 2013, and who can forget the legendary Game Seven victory against the Lightning in 2011 in which the previously mentioned Horton scored the only goal.

In the postseason, nothing is easy, and nothing is guaranteed. It’s all about finding the will to win, the will to dig deep and find ways to win. This Bruins team has done it throughout this season, and the key is how they can carry that over to the playoffs. The Bruins have the right coach, the right group, and the right fans to make another deep run. This team is very capable of making memories to last a lifetime, but we need to keep in mind that how much we all want to see that, the playoffs are unforgiving.