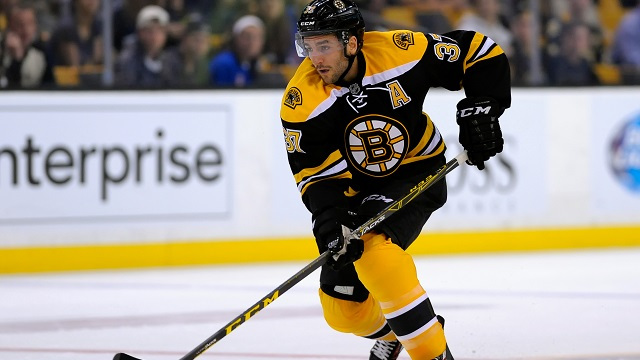 Shouldn't be a surprise, but…

Patrice Bergeron is a finalist for the Selke Trophy once again. Couturier (PHI) and Kopitar (LA) the other finalists for the award.

Patrice Bergeron is OFFICIALLY named one of the finalists for the #FrankJSelke trophy for the 7th straight year! #GoBergy #BruinsNation #BostonBruins

He is tied for the all-time lead with four career Selke wins. #NHLAwards pic.twitter.com/v3IE9oUVzv

Ever since the trophy’s creation, it has been awarded to the best defensive forward throughout the course of the regular season. For Bergeron, it is an opportnunity to break the NHL record for most Frank J. Selke Trophies, tied with Gainey. Patrice has won the award on four previous occasions, (2011/12, 2013/14, 2014/15, 2016/17).

This past season has been one of the best for the 32-year old Bergeron, who scored 30 goals along with 33 assists, good for 63 points on the year in only 64 games played, his second-highest point total in his last five seasons. Along with the points, Bergeron finished the campagin with a +21 rating, his third-highest of his career.

Bergeron is commonly known throughout the league for his domination on the faceoff dot. During the 2017-18 season, ‘Bergy’ had a 57.3% average on the dot, winning 784 of his 1368 faceoffs taken. Bergeron had 55 takeaways during the season as well, his third-highest number of takeaways, with 12 less than his 2015-16 season and he played 16 less games this season than the ’15/’16 campaign.

The other nominees, Sean Couturier and Anze Kopitar also had great seasons. Couturier had 31-45-76 totals with a +34 rating while Kopitar finished with 35-57-92 totals and a +21 rating. However, it is worth noting that Couturier and Kopitar each played a full, 82-game season.

This is the first time that Couturier has been nominated for the award while Kopitar already has experience in winning the trophy, back in 2015-16, his first and only one to date.