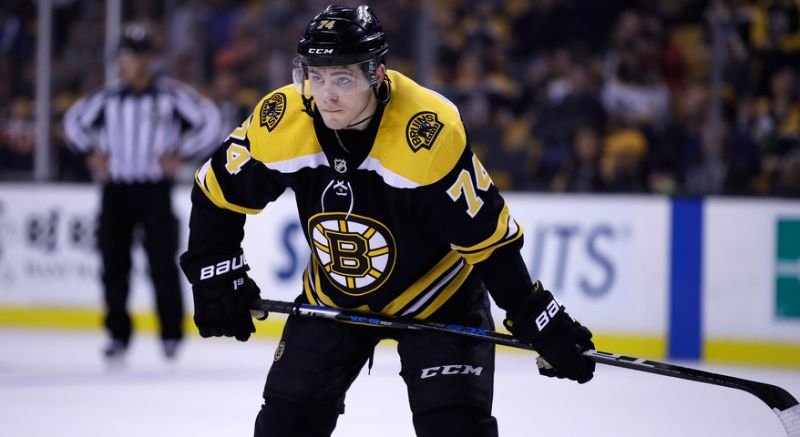 Any fan of playoff hockey knows that a team needs all four lines rolling in order to dub themselves kings of the NHL.

Thus far, the Boston Bruins’ third line has been crunching the opposition along the boards, the fourth line has rarely had a bad shift, and the first line has been firing on all cylinders.

The same can’t be said about the second line. While rookie Jake DeBrusk has been nothing short of a phenom, his linemates – David Krejci and Rick Nash – have been inconsistent. When they do show up, it is DeBrusk making them look good, at least for the most part.

DeBrusk has been a joy to watch this postseason for Bruins fans everywhere. The 21-year-old has registered a point in every playoff game but Game 3’s loss to the Toronto Maple Leafs. Overall he has registered six goals and two assists during his first NHL postseason.

The flashiness of DeBrusk’s goals has been something to marvel at. While the majority of them have been assisted by Krejci, they often come from a superb individual effort from the rookie. Take this one during Game 7 against the Maple Leafs for example, which went on to become the game-winner no less.

But DeBrusk is no stranger to strong playoff performances. During the 2017 AHL Playoffs, the then 20-year-old potted six goals and three assists in 17 games with the Providence Bruins. He even notched the Baby B’s first goal of that postseason.

But DeBrusk could sure use some help. While Krejci and Rick Nash have shown up at times, it is really the rookie that has led the way and stole the show.

Krejci & Nash Must Step Up

It is not fair to say that Krejci and Nash have been silent this postseason. Krejci has tallied two goals and seven assists thus far. One of his two goals have come with a DeBrusk helper, and all but three of his assists have come on a DeBrusk goal.

Of course, you have to give Krejci credit. As stated above, many of DeBrusk’s goals have come from great individual efforts, but the Bruins’ second-line center has set up his winger quite nicely on multiple occasions.

Then there’s Rick Nash, who finally showed up in Game 1 against the Tampa Bay Lightning with a pair of goals, including this absolute snipe:

For his second goal of the day, Rick Nash decided to just wire the thing. #StanleyCup

An important thing to be noted about this play is Krejci’s drive to the net which draws both Tampa Bay defensemen below the hash marks. This created plenty of space for Nash to take his time and target the top left corner. This was basically a role reversal as it usually the power forward you see crashing the net.

But consistency is the key word of this article. There have been too many instances where the two veterans have simply looked sluggish throughout this postseason. Take Game 7 against the Maple Leafs for example. It took a full 40 minutes for David Krejci to wake up. It seemed that coming out of the second intermission, we witnessed an extra boost in his stride that should have been there all game long.

Then there’s Nash who has just three goals and an assist to his name throughout the 2018 Stanley Cup Playoffs. The only consistency of No. 61’s game has been tossing opponents into the boards every chance he gets.

If the Bruins are to achieve more successes this postseason, they will need all members of their second line to find consistency. DeBrusk has set the stage, now Krejci and Nash need to follow through.