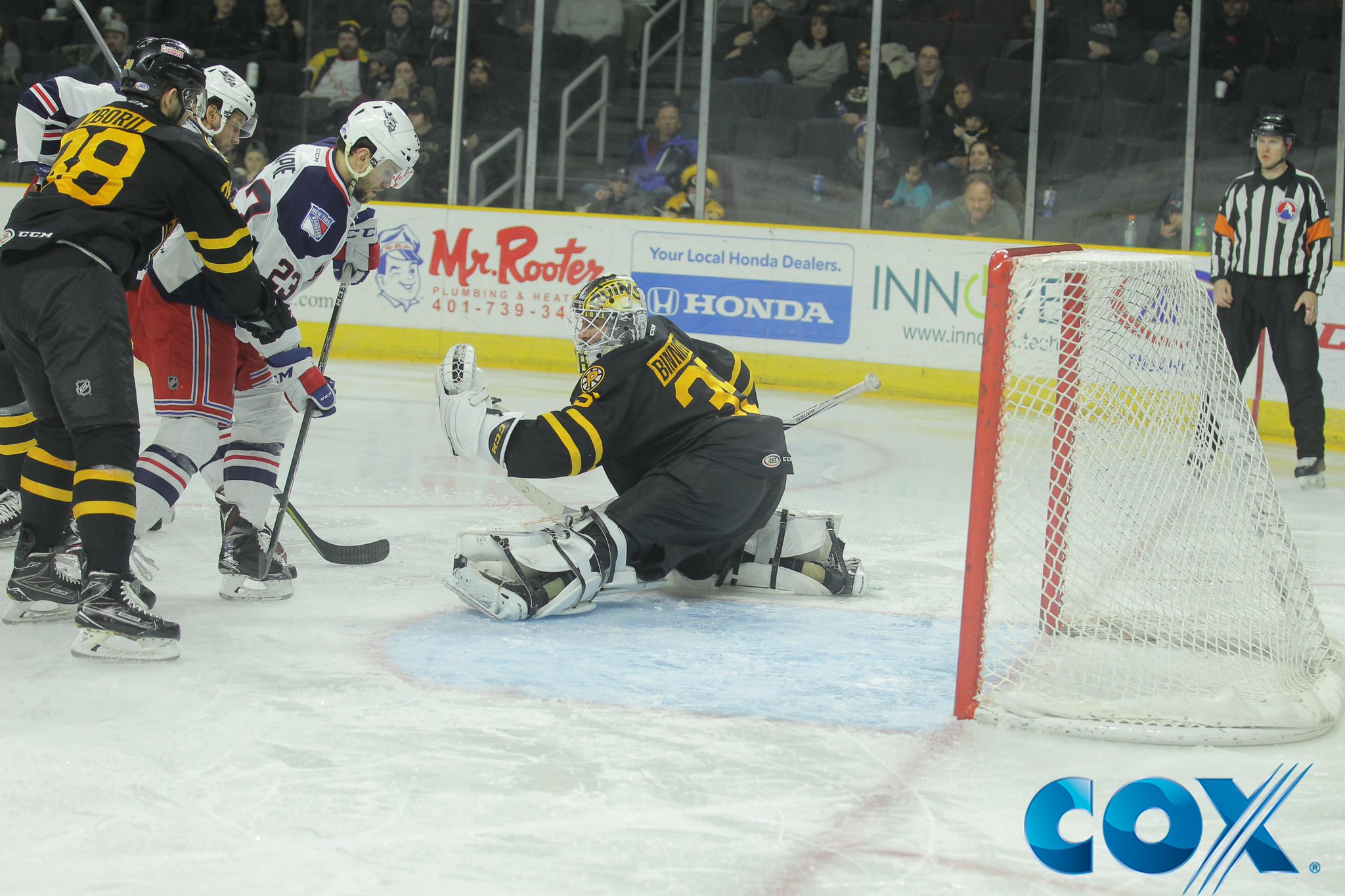 Tl;Dr Recap for those who just want the stats:

Providence skated against the Baby Penguins Wednesday night, opening a 3 game road trip to eastern Pennsylvania. The effort from the Bruins was said best by the Pens’ play-by-play announcer: lackadaisical. The only bright spots of the night came off the stick of Jakub Zboril, who had a strong game except for one hiccup in the second period. Through the first 18 minutes, the Providence defense sagged, allowing the Penguins to get 14 shots on goal. Fortunately, McIntyre looked to be having another brilliant game against the Penguins, while the team in front of him opened the scoring in the final minute of the first.

After a scrum in front of the net, and a clearing attempt by the Penguins, Jakub Zboril held the puck in at the blue line, and calmly aimed an ensuing booming slapshot that hit the back of the Penguins net. The Pens didn’t take long to tie the game up in the second. Almost 2 minutes in, Daniel Sprong took an outlet pass from Jena-Sebastian Dea and charged up the left-wing boards. After entering the zone, Sprong took a serpentine route around the Providence defense and threw a backhand shot-pass that snuck under the pads of McIntyre who unsuccessfully questioned if the net was dislodged. A few minutes later, Sprong found the back of the Providence net again; Kevin Czuczman sprung a high loft pass to Garrett Wilson, who centered the puck for Sprong and an easy five-hole shot past a bewildered McIntyre.

The bleeding continued a couple minutes after that as Wilke-Barre continued to pressure the Bruins. Jakub Zboril made his only gaffe of the night as he carried the puck behind the Penguins net, and went to backhand shovel pass to a teammate/ Instead, he passed directly onto the stick of a Penguin, allowing them to break up the ice. Once into the Providence zone, Sam Lafferty and Ryan Haggerty worked the puck along the right wing boards, and the latter hit a streaking Joseph Cramarossa who called for the puck in the slot and shot glove side on McIntyre.

Providence responded with a goal of their own before the period ended to bring them within one. After the Penguins cleared the puck, Jakub Zboril caught the high loft out of the zone and quickly transitioned it to teammate Colby Cave. Cave shoveled back to Zboril who took a hard hit to make another small shovel pass to Anton Blidh. The latter walked into the right-wing circle and sniped the puck short side high on Tristan Jarry. This would be the last goal Providence scored as Teddy Blueger added a goal off an assist from former Bruin Zach Trotman and teammate Adam Johnson. Jared Tinordi would hit the back of an unguarded Providence cage to secure a Penguins victory.

The Providence Bruins left the PPL center in Allentown, PA, after their final regular season matchup with the Lehigh Valley Phantoms, with a miserable loss. Despite the return of Jordan Szwarz to the lineup, the Bruins had trouble keeping up with the speed and transition game of the briskly skating Phantoms squad. Only the brilliant goaltending of Jordan Binnington kept the score close, despite a Providence loss. Binnington fought off several quality scoring chances in the first period, however, buckled in the second. Off a faceoff win, Phil Varone won the draw to Will O’Neill who then passed from the left wing boards to the point man Greg Carey.

From the blue line, Carey fired a booming slap shot over the shoulder of Binnington less than 10 seconds after the puck had dropped. This seemed to set the tone for the second period, as the Phantoms outshot the Providence Bruins 19-1. Binnington saved 18 of 19 of those shots to keep the score close, and Providence tried to ramp up the intensity in the third period. Their comeback bid would fall short, as the Phantoms doubled their lead with less than 4 minutes in the game. The score ended 2-0 in the Phantoms favor as Providence dropped another contest in regulation.

On their final game of the week, Providence came out with one mission: avoid going pointless in their road trip. Back in Wilkes-Barre, the visiting team took the fight to the opposition and capitalized on mistakes made by the Penguins squad. Slightly past the halfway mark of the first period, former Bruins prospect Zach Trotman was called for roughing sending the Bruins to the powerplay. Toward the end of the 2-minute man advantage, Colby Cave fed Swiss army knife forward/defenseman Sena Acolatse by the blue line. Acolatse fired a wrist shot in on Tristan Jarry in the Pens net, and Adam Payerl collected the rebound and scored to put Providence ahead by 1. Later in the first period, newcomer Trent Frederic (who had a strong game overall with several blocked shots and excellent stickhandling) received the puck by the blue line and skated in towards the slot. As he closed in on the net, the Penguins tried to poke the puck off his stick, but as the Pens Play by Play announcer declared, Frederic was “Stickhandling in a phone booth” keeping the puck moving forward.

Eventually, he was stripped of the puck, but Adam Payerl was nearby and shoveled the puck back to Frederic who wound up and wristed the puck blocker side on Jarry to give the Bruins a 2-0 lead. The Pens’ Jean-Sebastian Dea cut the lead in half a minute later, but Providence netminder Jordan Binnington refused to surrender any more goals. Providence had a strong second period but had to wait till the third period to extend their lead. Again on the power play, Jordan Szwarz potted his 20th, on feeds from Austin Czarnik and Tommy Cross. Ryan Fitzgerald made a bid for an empty net once Jarry was pulled in favor of an extra attacker, but his shot rang the near post as he was being hauled down by a Penguin defender. Providence went back to the powerplay, and Tristan Jarry returned to his net for the remaining seconds of the game.

Plus / Minus For The Weekend

Plus: + Jakub Zboril opened the scoring Wednesday night with an unassisted PPG; He then added an assist on the only other Providence goal of the night for the first multi-point game of his pro career.

+ The Bruins Powerplay connected 3 times this weekend, including twice on Saturday night in Wilkes-Barre.

+ Despite losing twice this week, the Bruins are still only a point behind Wilkes-Barre for 2nd in the Atlantic division. Charlotte, behind Providence at 4th place, is further from Providence than Providence is from Wilkes-Barre.

+ By virtue of points, Providence swept the Season series with Wilkes-Barre.

+ Jordan Binnington had a good weekend, allowing only 2, and 1 goals respectively in 2 back to back decisions.

Minus: – Zane McIntyre might have had the Baby Penguins number for most of this season; however he spotted them 4 goals Wednesday night for another 4 goal-against game in a row. His worst stretch came in the second period where he allowed 3 goals in a row over 6 minutes of play.

– Austin Czarnik, Emil Johansson, Ryan Fitzgerald, and Colby Cave all had a rough night against Wilkes-Barre Scranton Wednesday night; all were -2.

– Peter Cehlarik took a nasty hit from the Penguins’ Andrey Pedan and was sent to the room for part of a period, but did return to finish the game.

– Providence was shut out in Allentown, PA, at the PPL center against the Lehigh Valley Phantoms for the second game in a row. The Bruins cannot seem to find offense in this building this season.

– Providence failed to convert on two 4 minute powerplays on Friday evening. Overall their road powerplay is a pedestrian 14.6%.

– In the second period vs. the Phantoms Friday night, Providence managed one shot-on-goal to Lehigh Valley’s 19.

Attention P-Bruins fans! Report to the @DunkinDonutsCtr this Friday at 7:05pm for the @coxnortheast matchup against the Hartford Wolf Pack! The first 1,000 fans in attendance receive a free Providence Bruins Team Poster! #Retweet pic.twitter.com/azxYi2TujC