Pastrnak & Krejci To Represent The Bruins At World Championships 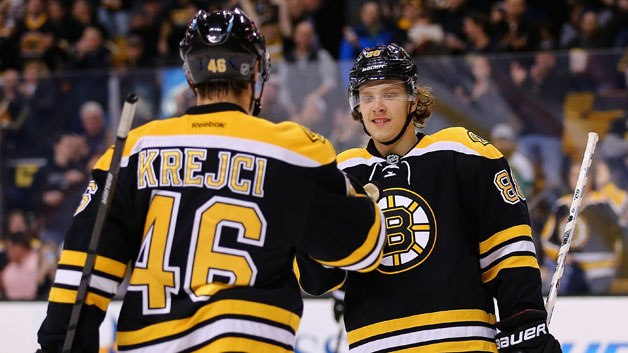 As announced earlier today by Josef Jandac (head coach for the Czech Republic), the Boston Bruins will have at least two players representing the team in the 2018 IIHF World Championships – David Pastrnak and David Krejci.

The move comes after the NHL team was eliminated in the Eastern Conference Semi-Finals in five games. Both Pastrnak and Krejci will reportedly also play on the same line, most likely the first line, for the remainder of the tournament.

Jandac also said Pastrnak and Krejci will play on one line

David Pastrnak just finished a career season with the Bruins. In all 82 games of the 2017/18 season, Pastrnak set a career-high in goals, assists, and points with 35-45-80 totals along with a +10 rating. The 21-year-old also had a great playoff run, even given the short amount of time.

In twelve games, Pastrnak scored six goals and assisted on fourteen others to bring his point total to twenty. In Game Two of the Eastern Conference Quarter-Finals against the Toronto Maple Leafs, David Pastrnak broke Wayne Gretzky’s record for youngest player to score six points in a single playoff game.

David Pastrnak (21 years, 324 days) of the @NHLBruins is the youngest player in NHL history to record 6+ points in a playoff game eclipsing mark set by Wayne Gretzky (22 years, 81 days) in Game 3 of 1983 Division Finals (4-3—7 at CGY). #NHLStats #TORvsBOS #StanleyCup
Via: @PR_NHL pic.twitter.com/uYnYDrb4Sh

When it comes to international play at the NHL level, Pastrnak has appeared in the 2016 World Cup of Hockey for Team Czech Republic, where he went scoreless in the three games played as well as most recently in the 2017 IIHF World Championships, finishing the eight games with one goal and six assists for seven points in the tournament.

For David Krejci, he is coming off of a 44-point campaign, (17 goals, 27 assists), in 64 games played. Krejci dealt with numerous injuries over the course of the season that led to him missing eighteen games for the Bruins.

In the playoffs, Krejci put up 3-7-10 totals in the twelve postseason games, finishing with a -4 rating and a 44.7% faceoff percentage as well.

According to 98.5 The Sports Hub, this will be the first time since the 2014 Olympic Winter Games in Sochi, Russia that Krejci has suited up on an international stage. During the 2014 Olympics, Krejci put up 1-2-3 totals in five games.

The two will join a Czech Republic team that currently sits in the fourth spot of the Group A standings, headed into a game against the Russians this Thursday, May 10th. The Czechs are yet to win a regulation game in the first three games, but still have four more preliminary games left to play.

It is quite possible that more Bruins announce their availability to play in the World Championships in Denmark this year, as the team will meet with the media at Warrior Ice Arena according to 98.5 The Sports Hub once again.