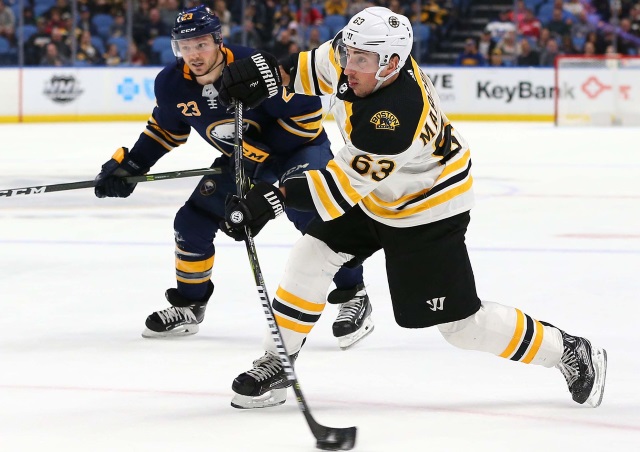 The season opener was dismal. No matter how you look at it, it’s hard to take positives out of a 7-0 loss to the Washington Capitals. A back-to-back away from home presents the potential for a quick turnaround from a very tough loss. Jack Eichel, Rasmus Dahlin, and company came into this one looking to set a new standard after a busy offseason.

From the start, it was apparent that things seemed to be clicking a little more in terms of puck possession and defensive zone breakouts. Some good back-and-forth action between both teams leads to the first goal of the season for the Bruins. Said back-and-forth action was highlighted by an impressive defensive effort from David Pastrnak. Brad Marchand then strolled into the offensive zone, stopped, and found the biggest guy on the ice, Zdeno Chara. The stern patience from Chara was very real as the mind games worked and he beat Carter Hutton top-shelf with 13:27 to go in the first. Charlie McAvoy had the secondary assist on the goal.

We're on the board. #NHLBruins pic.twitter.com/s4OsrSUVbd

Vladimir Sobotka found a way to help his former team from long ago when he went to the box for slashing with 6:02 to go in the period. Towards the end of the power play came Ryan Donato’s first goal of the season, from Brad Marchand and Patrice Bergeron. 4:26 to go, and a 2-0 lead that has the Bruins feeling way better than they were on their way to Buffalo. Donato-to-Bergeron, Bergeron-to-Marchand, and Marchand back to Donato – a smooth zone entry capped off with a smooth finish.

Brad Marchand mentioned to NESN’s Alex Kraemer during intermission that doing the little things better helped in comparison their season opener. Things certainly looked more natural and efficient in the first. Rolling out a new-look lineup on top of moving further away from the feeling out process helped contribute to a 2-0 lead. Must be nice to be on the good side of a 2-0 advantage after 20 minutes.

Just 2:47 into the second frame came an interesting slashing call on Danton Heinen, to say the least. A strong first penalty kill of the game allowed the Bruins to avoid getting behind the ball early in the period.

An interesting non-call came following a Sean Kuraly and Evan Rodrigues around. Kuraly then beat Rodrigues on a defensive zone draw and found himself on a breakaway, only to be denied on an attempt to squeak one through the five-hole of Carter Hutton. A huge stop by Hutton halted an attempt at a commanding 3-0 lead for the Bruins.

Responding to getting shut out 7-0 by tallying three assists within the first two periods is one way to get the offensive juices flowing – so Brad Marchand did just that. He hopped on a loose puck and found David Krejci who waited for a lane for David Pastrnak to bury his first of the season, making it 3-0 late in the second.

Heading into the offensive zone, a Nathan Beaulieu slap shot caught Charlie McAvoy pretty good on the inside of his foot with just around two minutes remaining in the period. McAvoy was slow to get up and headed off the ice to have the injury checked out. It’s one of the last things anyone on the Bruins wants to see as McAvoy is just starting his sophomore season with big expectations. Brandon Carlo and Kevan Miller rotated in with Zdeno Chara after the injury.

A steady effort in the second was unfortunately hampered by losing such a prominent player to injury in Charlie McAvoy. The Bruins were set to roll five defensemen in the fold as they went into the final frame.

The whole five defensemen thing didn’t last long as Charlie returned come the third period. This news was surely much to the relief of the Bruce Cassidy and crew especially as altering a game plan substantially with a three-goal lead isn’t ideal, at all.

Jaroslav Halak continued to make key saves, as Jake McCabe unleashed a wrister right into his chest with some heat on it in open space. The shutout is still intact at this point with 16:04 to go. Despite the 3-0 lead, shots were 24-23 Buffalo just around the halfway point of the third period.

32 saves for Jaro in his first #NHLBruins shutout. pic.twitter.com/mcQAZzm7gF

The offensive momentum and the presence in Halak’s grill were definitely present, the Sabres just couldn’t convert. Sometimes it’s the defense, or bad luck or both. Just maybe it’s Kevan Miller eating a cannon from Jeff Skinner like it was no one’s business at the 5:42 mark as offensive chances become ever so important for Buffalo.

Big deficits can provoke desperation, and in this case, Carter Hutton vacated his crease with 4:30 to go. Perimeter work with the double-Rasmus blueline led to some extensive offensive zone time for Buffalo. David Backes and Zdeno both tried to airmail some empty-netters to put the game on ice, to no avail.

Not one, not two, not three, but four assists for Brad Marchand on the Patrice Bergeron empty-netter to make it 4-0 Bruins. Bergeron’s goal capped off an emphatic response after an eye-popping loss at the hands of the Washington Capitals on Wednesday night. Jaroslav Halak picks up a 32-save shutout.

32 saves for Jaro in his first #NHLBruins shutout. pic.twitter.com/mcQAZzm7gF

The Bruins now head prepare for their home opener on Monday against the Ottawa Senators with a 1-1 record – and some pep in their collective step. Some rest will be nice after starting the regular season with a back-to-back from Washington D.C. to Buffalo.