Bruins Jake DeBrusk: Getting His Groove Back 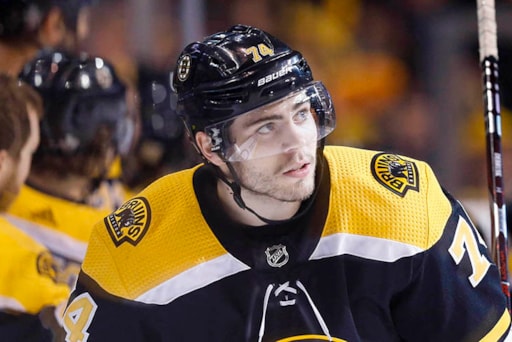 There’s been a lot of tough news involving the Boston Bruin as injuries continue to mount for this ailing team. In what seems like a repeat from last season, Boston will once again need to rely on a bevy of young talent as bodies continue to hit the floor. For Jake DeBrusk, there’s more to prove this time around, with the hope that he will bypass the dreaded sophomore slump that can affect second-year players. Despite a slow start, DeBrusk is quietly becoming a vital part of the team.

With November in the books,  the Bruins are heading into a tough part of the schedule as they hosted the Pittsburgh Penguins last night.  They play against the Montreal Canadiens on Saturday and the Toronto Maple Leafs on Monday. DeBrusk, for his part, will be looking to expand his role on the second line alongside veteran David Krejci- a role he’s happy to fill. While the discussion has been the lack of secondary scoring (and now the numerous injuries), Coach Bruce Cassidy has had to tinker and shuffle the Bruins roster. This is where the 22-year-old Debrusk comes in. Aside from the few road bumps he had earlier in October, consistent productivity is what Cassidy needs from the young winger:

“What we’re looking for is a little more consistency on the nights when the offense isn’t there. Saying that young guys disappear is maybe a little unfair. But sometimes they’re not as dialed in as they need to be. Mentally, they’re not as strong as the older guys, who know there are going to be rainy days. Some rainy weeks and months. So you just have to find a way to contribute. That’s what happens with the younger guys. They have a level of success, and that’s what they want every night, but life doesn’t work that way.”

Being slotted alongside someone like Krejci has helped the upcoming superstar, as well as having an advantage over the other players: his father Louie happens to be a former NHL star. Aside from getting some sound advice, DeBrusk has had a first-hand look at what the NHL life is about and most importantly, what it takes to have a successful career.

“I listen to the veterans here. [Krejci] was helping me out, saying stuff that he went through. Obviously, he’s played for a while. He understands the game…and, of course, my dad.”

After a bit of a scoring dry-spell (and with counting tonight’s goal against the Penguins) the Edmonton, Alberta-native has now netted six goals in eight games. For the Bruins, DeBrusk is now tied with Patrice Bergeron for goals (9) and is in fifth place for points (11). In a recent loss against Vancouver, he had three points that night, netting two goals with one assist. On the power-play, the 6-foot-tall, 188-pounds winger has accumulated four points (so far).

"It's fun to gut that one out there at the end. To get through that win with a lot of bodies out of the lineup, I think that brings us closer together as a team."

Despite all the injuries forcing Coach Cassidy to make some nifty maneuvers, no one is guaranteed a spot in the lineup. The time for players to step up and be that much more dependable is obvious. Luckily for the Black and Gold,  DeBrusk is becoming just that: a player who can adapt to where he’s needed. Staying competitive will be key to whether or not he continues to play a prominent role for the B’s. And with his noticeably growing confidence, DeBrusk recently found himself playing up front with the first-line. In a nerve-racking game against Arizona (and with a net-drive by Marchand), DeBrusk scored the winning goal off a rebound in the crease. In tonight’s game against Pittsburgh, Debrusk would again score, ripping a one-timer off a Krejci pass.

The bruised Bruins face a tough Canadien team tomorrow night in Montreal. DeBrusk will hopefully continue to do what he’s been doing; playing where it counts.

“The main thing is to build on last year. Every statistic, every aspect of my game overall … I learned a lot last year. Had some ups and downs. Hopefully those ups and downs last year help me stay consistent.”

.@JDebrusk and David Krejci are all in for the season of giving (and going). #NHLBruins pic.twitter.com/d3WnOLPYYm