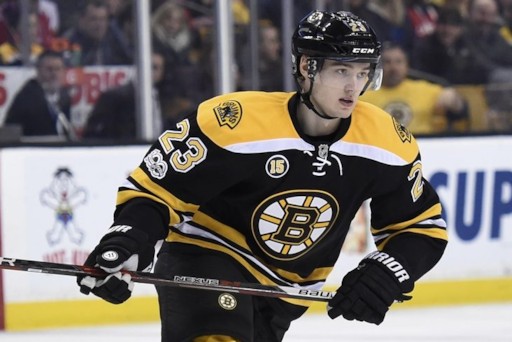 Chosen 45th overall in the second round of the 2015 NHL Entry Draft, the Boston University alum is currently in his second full professional season, after making his debut with the Bruins in April 2017. JFK is a two-way center and has scored four points in nine games with the P-Bruins this season, after notching 32 points in 58 games in his first year in the AHL, while struggling with injuries. Today marks his first call-up to Boston since his NHL debut.

This is an interesting recall, as JFK was thought to be one of two players — the other being 2016 first round pick Trent Frederic — competing for third line center on the Bruins’ NHL roster this season. Despite having obvious NHL potential, neither Forsbacka-Karlsson nor Frederic could make a compelling case for themselves in training camp or during the preseason, and both were cut from the Bruins’ NHL roster before the regular season began. JFK has since slipped down the Bruins depth chart.

As it is currently assembled, the Bruins’ third line consists of Danton Heinen, David Backes, and Anders Bjork. The bottom six has been a continual problem this season, as the team has been lacking depth scoring altogether, and the third line has been a turnover machine for the most part. This is a great chance for Forsbacka-Karlsson to take advantage of the opportunity that has been afforded to him.

It is a very lofty comparison, but Forsbacka Karlsson is often noted to possess a skill set similar to that of Bruins center Patrice Bergeron. JFK enjoyed two successful seasons at BU, scoring 63 points in 78 games and playing on the power play and penalty kill as the Terriers’ top center. Should Cassidy give him the nod tomorrow night against the Maple Leafs, it is possible that JFK could earn a roster spot in the Bruins’ bottom six by being engaged during every shift, making the intelligent plays he’s known for, and keeping up his usual defensive awareness. He has endured more than his share of injuries and rough stretches since signing with the Bruins, but JFK definitely still possesses NHL potential.

While I have to admit I was disappointed with what I saw from him in preseason, I’m not worried. Unfortunately for him, its been a string of bad luck and timing as he’s had some injuries get in the way. He certainly has the IQ and skill for the NHL and he’ll get there. #NHLBruins https://t.co/4Iznz7NohZ

Another likely possibility is that Don Sweeney wants to address the Bruins’ bottom six by bringing new blood in via trade. Jakob Forsbacka-Karlsson would likely not be a centerpiece in a deal, but he’s a very nice piece to get back, as two-way forwards are coveted in today’s NHL, especially those who are a little more offensively gifted. It wouldn’t be crazy to think that he is being called up specifically to show potential NHL suitors what he brings to the table.

One would think if the Bruins were planning to use a center from Providence to insert into their lineup and improve the bottom six, they would have called up Colby Cave or Cameron Hughes. Since they chose one who has struggled to prove he belongs in the Boston lineup, it isn’t unreasonable to believe it’s because the Bruins wouldn’t be opposed to parting with him if the right deal came along.