JFK Excelling In Various Roles For The Bruins 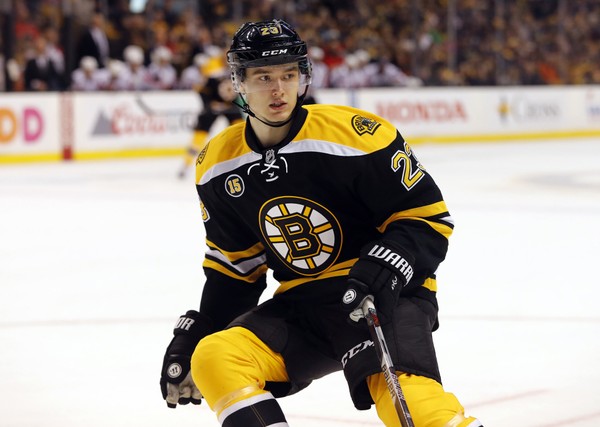 It has not been an easy road to the NHL for Jakob Forsbacka-Karlsson. He was given a shot at centering the Bruins third line in training camp and was unable to earn a roster spot. As a result, he began the season in Providence. On November tenth he was recalled by the Bruins and has not wasted his second opportunity.

Since the Bruins drafted Karlsson in the second round of the 2015 NHL draft expectations, have been high. His points total does not blow people away however he does everything right. He plays well in all three zones which have drawn comparisons to a young Patrice Bergeron. In his brief NHL career, Karlsson has turned a Bruins third line that was as a liability into a strength.

With the addition of Karlsson, the Bruins third line has been fast and aggressive. Although, he brings more skill and ability to the Bruins that is not where his value lies. His ability to be a responsible two-way defender allows Heinen and Bjork to break out in transition. For the first time all season it appears that Heinen is finding his game. This is key as he had high expectations coming into this season. Of the three, however, JFK has been the most impressive.

Additionally, he has shown the ability to adjust his game. During training camp, he was passive with the puck and did not appear ready for the NHL. In his second opportunity, he has been more engaged and aggressive. It has allowed him to be more efficient offensively which is what the Bruins need. Every young player goes through growing pains and JFK has been no different. He has shown maturity as his failures have only improved his play.

JAKOB FORSBACKA KARLSSON TALLIES HIS FIRST CAREER GOAL TO GIVE THE BRUINS THE LEAD! #FirstNHLGoal#NHLBruins pic.twitter.com/MOmBat7Dzg

In eight games the former second-round pick has not lit up the stat sheet. He has only two goals while averaging ten minutes of ice time a game. That, however, does not represent how well he has played. He has been one of the Bruins most productive players during his brief NHL career.

After a slow start offensively Karlsson has shown improvement over the last four games. Against the Red Wings, on Wednesday his aggressive approach was on display in the first period. He showed grit as he battled for a rebound in front of the net. This is the style of play the Bruins have been looking for from their second-round pick. Because of his recent play, Karlsson has been given the opportunity to center one of the best lines in hockey due to Patrice Bergeron’s injury.

It wasn't pretty but the Bruins strike first!

The Bruins do not expect him to match Bergeron’s offense. Karlsson is only seven games into his NHL career and still has much to learn.  Playing alongside Marchand and Pastrnak will improve his game and help his growth. It is the ultimate test for Karlsson who is expected to be a big part of the Bruins future. So far he has met expectations and welcomed any challenge.